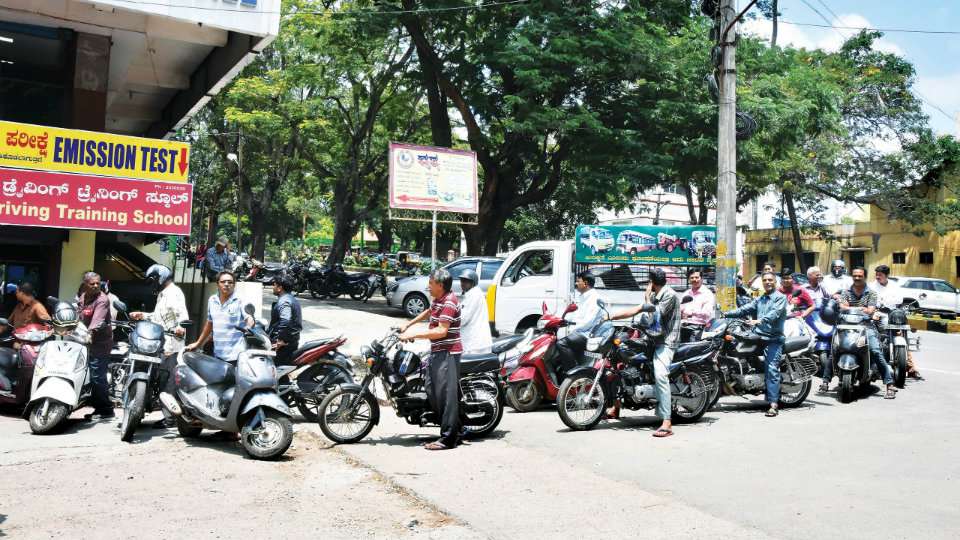 Mysuru:  Queues extending for more than one hour, squabbles over waiting time and hundreds of vehicles being checked for emissions — a week after the Motor Vehicles (Amendment) Act, 2019, came into force, pollution checking centres in Mysuru have seen a sudden surge in customers.

Today being a Sunday, there was extra rush as people were eager to get their “Pollution Under Check” (PUC) Certificate today itself to avoid coughing up a huge amount as fine. There is a three-fold increase in the number of vehicles taking the tests at centres, and this is because the penalty amount for violating emission norms has also increased multi-fold.

Under the amended Act, penalty for PUC violations has increased up to Rs. 10,000. The fine used to be Rs. 1,000 for first offence and Rs. 2,000 for subsequent violations. There are a couple of authorised emission test centres in city including two near the RTO Office on M.G. Road, near K.D. Circle in Vijayanagar Second Stage, near Shubhodini Convention Hall at Hebbal, near Old RMC private bus stand on Sayyaji Rao Road, Dr. Rajkumar Road and two near East RTO.

People are queuing up at the centres from 9 am to 6.30 pm and each centre checks a minimum of 600 vehicles per day including two-wheelers and four-wheelers. And each person has to wait for more than one hour to get his vehicle checked.

“Earlier, we used to get only 5-10 vehicles, including four-wheelers, a day for the emission test. But for the past four days, we have been issuing more than 500 certificates. The big fine amount has created a fear among motorists. Every emission testing centre is crowded with vehicles waiting in queues,” said Mubarak Pasha of an emission centre on Sayyaji Rao Road.

A PUC test involves checking for air pollutants emitted by vehicles, such as carbon monoxide and hydrocarbons. The validity of the certificate is one year for BS IV vehicles and six months for others.

Another person who owns an emission testing centre said that the cost of the test is low, but still people were refusing to get it done. “It is only when the new rules came into force that the motorists realised that it’s important,” he said.

While the Police are happy that the new fines will help them crack down on vehicles that are emitting carbon beyond the permissible limits, people are not happy over sudden implementation. Kunder, a hotel owner told Star of Mysore that the rule has been enforced without giving any breathing time for the vehicle owners. “At least, more emission centres or points could have been opened before the rule was implemented. Motorists are leaving all their work behind and running behind the centres,” he lamented.

President of Mysuru City Driving School Owners’ Association M. Anand Kumar said that first, all the government vehicles must be checked. Many of the KSRTC buses, Police and Government Department vehicles, vehicles used by Mysuru City Corporation Staff, CESC employees and officers are more than 15 years old and are highly polluting. All these vehicles must be phased out,” he opined.

An employee at a testing centre in Vijayanagar said, “Till last month, we would sit idle in our cabin with a few vehicles coming in. Now there’s no time to eat lunch.” After closing time, vehicles that are still in queue have to come back the following day to queue again, and there is a first-come-first-served policy, he added.