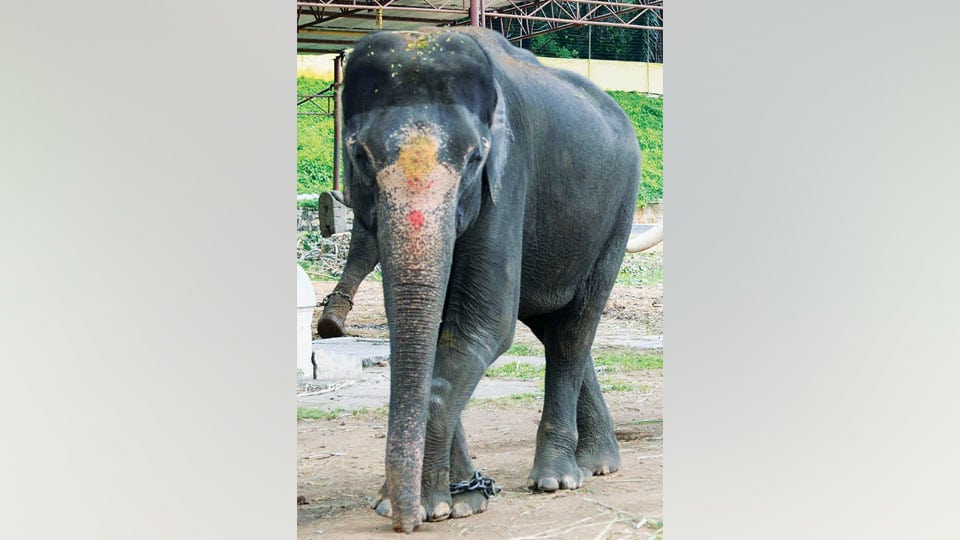 Mysuru:  After the Dasara elephant ‘Eshwara’ episode, the Forest Department is now grappling with a new problem as it has found that another Dasara elephant ‘Varalakshmi’ which is being trained to participate in Jumboo Savari, is now in pregnancy stage.

Hence, it did not participate in the cannon drill rehearsal held recently and it is almost certain now that it is not going to participate in the Jumboo Savari. It will be fed with nutritious food for another week and sent back to the forest camp from where it was brought.

The elephants have long gestation period of about 18 months and 63-year-old Varalakshmi, which is nearly ten months pregnant, however, is in good health.

The pregnant elephants, it is said, walk for nearly 30 km to 40 kms in the forest and hence it is not new for Varalakshmi to exercise on the Dasara procession route with Mahout J.K. Ravi and Kavadi Mahadeva looking after it.

It is also being fed a special diet like other elephants and the calf in the womb will also benefit from this special, nutritious food, said Veterinarian Dr. D. N. Nagaraj, speaking to Star of Mysore.

“But it is not allowed to carry any weight. Special care is being given to Varalakshmi once we came to know it is about ten months pregnant,” he said.

Deputy Conservator of Forests M.G. Alexander said that Varalakshmi is being given special diet and it is being properly looked after. “As we are concerned about its health, we will send it back after a week.”

Varalakshmi is 2.46 metres tall, and 3.34 metres wide. It is a very gentle elephant that was captured in the Kakanakote Forest in 1977 and is in the Mathigodu elephant camp. It has been participating in Dasara procession since the last ten years.

There are records to show  that pregnant elephants have participated in the Dasara procession before. It may be recalled that Elephants Durgaparameshwari, Sarala and Chaitra have all been part of the Jumboo Savari and soon after returning to the camps they have given birth to calves.

The Forest Department officials have urged the motorists not to honk while Dasara elephants are on their rehearsal rounds on the Jumboo Savari route.

This caution has been given to the public as it was found that on Tuesday last when the rehearsal was going on and the elephants were passing by City Bus Stand, a few of the two-wheeler riders blew the horn loudly disturbing them. As a result, including Arjuna, the howdah elephant and three other elephants just turned sideways and stood. This caused a tense situation for a few moments.

The Forest Department officials have asked the Traffic Police not to allow the vehicles while the elephants pass from Chamaraja Circle to K.R. Circle. The vehicle riders on both sides of Sayyaji Road from K.R. Circle to Bannimantap have also been asked not to blow the horns and cooperate.

Meanwhile, District in-charge Minister V. Somanna had called a meeting of Forest Department officials to discuss about the participation of new elephants in Dasara procession.

The Officers informed the Minister that it was very important to bring new elephants to Dasara and introduce them to the crowd so that they will adjust to it and behave properly. Besides, the howdah carrying elephants should also be identified early and trained, as for instance Arjuna, which will be carrying the howdah, will turn 60 next year.

The elephants that need to replace him have to be trained at least for three to four years before they are allowed to carry the howdah, they explained and as a result, Abhimanyu who is 53-years-old, is being trained now.  The other elephant that is already identified is Eshwara (it may be recalled that he had shown signs of panic recently) who is participating in the Dasara procession this year for the first time.

Somanna after listening to the authorities told them that he would not interfere in their decision as they were experts but all that he was expecting from them was to see that the elephants do not create any problem to the public during the Jumboo Savari. DCF Alexander, Bandipur Conservator of Forests T. Balachandra, DCF Dr. K.C. Prashanth Kumar and others participated in the meeting.