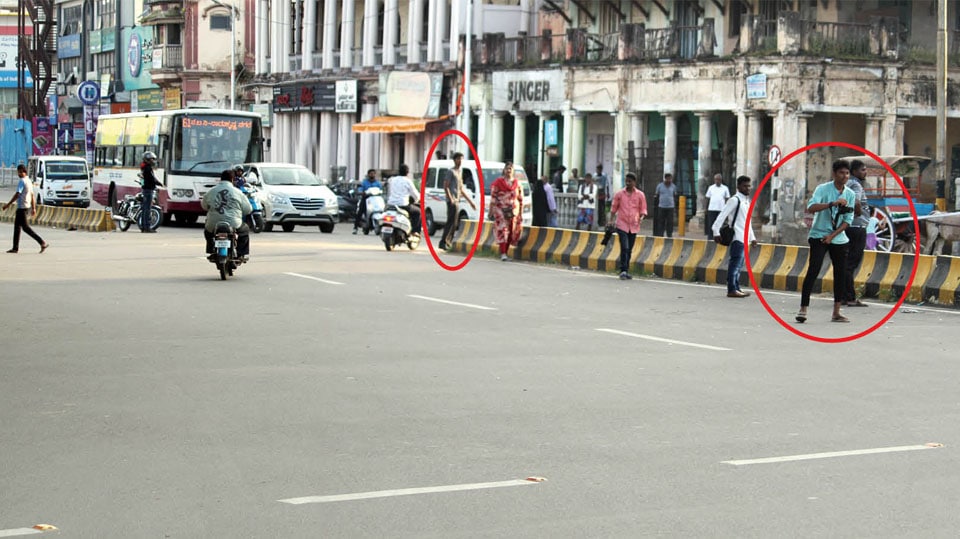 Mysuru:  Wedding season is here. And the desire to capture the beautiful moments of wedding event is strong and therefore we find dedicated pre-wedding photo-shoot services, the demand of which is growing fast.

These photo-shoots are often imaginatively planned and styled with each photographer coming up with perfect ideas to make every pre-wedding shoot the best. And of course, one major factor that marks the beauty of a pre-wedding shoot is the location one chooses.

Obviously there are many good locations that can act as a perfect background to a couple shoot. But how about a busy road for a pre-wedding shoot? Yes. This morning, the busy road near the Town Hall-Mysore Palace junction (Ashoka Road and Sri Harsha Road) witnessed one such photo shoot that led to a lot of inconvenience to the commuters.

Traffic on the stretch was stopped frequently from 6 am to 8 am. Even an ambulance was stopped for 10 minutes. The City Police have now taken the incident seriously and criminal cases will be booked against the people involved in the shoot.

Over 10 persons including the couple who wanted the photo-shoot done landed on the road near the Town Hall at around 6 am. The shoot started bang on the middle of the road with Mysore Palace as the background. While over two photographers were capturing the couple in various poses, the others were giving ideas for the couple to pose.

As the shooting progressed, two to three persons blocked the two-way road and early morning commuters were perplexed to see that their vehicles were stopped on the middle of the road and there was no traffic signal. The photo-shoot team blocked the road frequently and whenever traffic piled up, they used to let go the vehicles.

Several commuters called Star of Mysore office to complain about the traffic blockade. They said that even an ambulance that was rushing to shift a patient from a hospital was stopped for 10 minutes. When some car passengers got down from their vehicles to question the shooting crew about the purpose of traffic block, the crew reportedly told them arrogantly that they have permission from Devaraja Garuda team.

“The photo shoot crew took the name of a Head Constable attached to the Devaraja Police Garuda team. This is sheer arrogance and abuse of power. How can the Police permit this? This is unacceptable,” a commuter told SOM. Sources said the photo-shoot crew and the couple were from Bengaluru and the crew had charged the couple more than Rs. 25,000 for the shoot.

Mysuru is witnessing a lot of pre-wedding photo shoots these days and the area in front of the Mysore Palace is one such location where shootings are held as thousands of pigeons fly. This location does not, however, block traffic as it is an open area.

Criminal cases will be filed Reacting on this morning’s photo-shoot near the Town Hall, Deputy Commissioner of Police (Crime and Traffic) B.T. Kavitha told Star of Mysore that the incident has come to her notice and action will be taken against the group.

“Nobody has the authority to block traffic and the Police do not give permission to such things. I have directed Devaraja Traffic Inspector Sooraj to book criminal cases against the people involved in the incident. We will take footages from CCTVs to identify the violators and even we have got their photographs sent by the public,” she said. On the allegation that Devaraja Garuda Head Constable had given permission illegally, the DCP said that Inspector Sooraj will look into this issue also. “I have asked the Inspector to verify facts submit me a report,” she added.