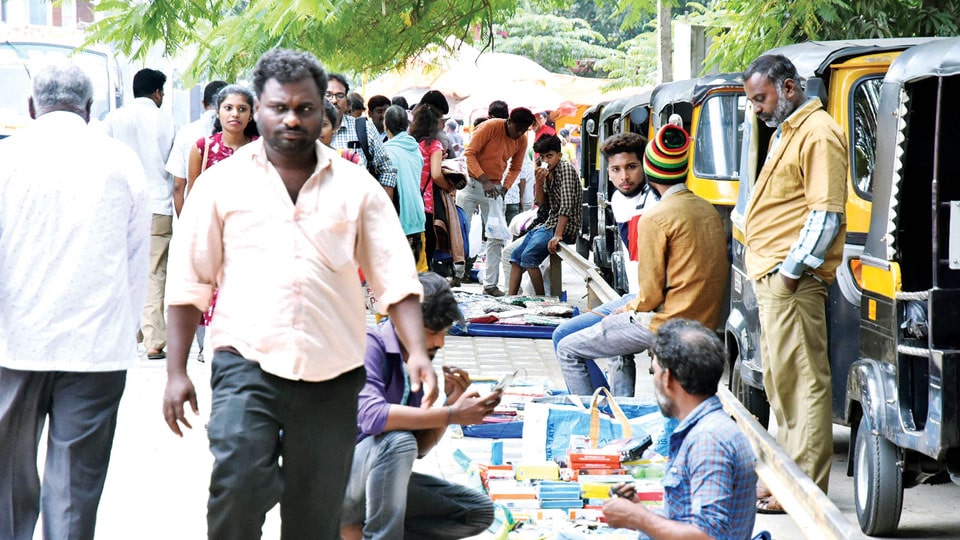 Vendors Back on Bus Stand footpath

Cleared on Oct. 26, they have returned in just a month unafraid of MCC or Police

Mysuru: After a gap of just one month, footpath vendors are back in business in front of Sub-Urban Bus Stand. They were cleared by the Lashkar Mohalla Police on Oct. 26 and by doing this, the Police had set an example to the Mysuru City Corporation (MCC) that was supposed to do this job.

But now, giving two hoots for the Police and MCC rules and regulations, vendors have occupied the busy stretch from St. Bartholomew’s Church till the Bus Stand. While a portion of the newly-laid footpath is occupied by autorickshaws, the other part is occupied by street vendors selling items including cut fruits, flowers, watches, trinkets, clothes, footwear, belts, wallets, purses, sun glasses, plastic items, caps, hats and food items.

These encroachments are a big nuisance for pedestrians as there is no space for them to walk and they now walk on the busy Bengaluru-Nilgiri Road, risking their lives as buses, cars and two-wheelers zip past the road at all hours.

Star of Mysore had published a report on Oct.25, highlighting the mess. Following the report and a series of complaints by the public, the Lashkar Police swung into action on Oct.26 and cleared encroachments. This too was reported by SOM on Oct.27 under the title “Police don MCC role; clear bus stand footpath.”

After clearing the stretch, the Police had put up a board warning of action if the footpath is encroached again. The warning board read “Instructions have been given not to conduct any business on footpath which is illegal and legal action would be initiated against those people conducting business on footpath illegally.” Now the vendors have proved that they are above law and they do not care for either MCC rules or Police action.

It may be recalled here that the MCC had recently re-laid the footpath near Sub-urban Bus Stand from the pre-paid auto stand. The estimate for the work was Rs.48 lakh which stretched from the junction of the road leading to Clock Tower till the junction of Irwin Road and the footpath has been raised in height and has been barricaded with steel railings for the safety of pedestrians.

Now with the vendors occupying the footpath, lives of pedestrians are once again in danger. Vendors have covered almost 60 percent of the footpath leaving little or no space for pedestrians to walk.