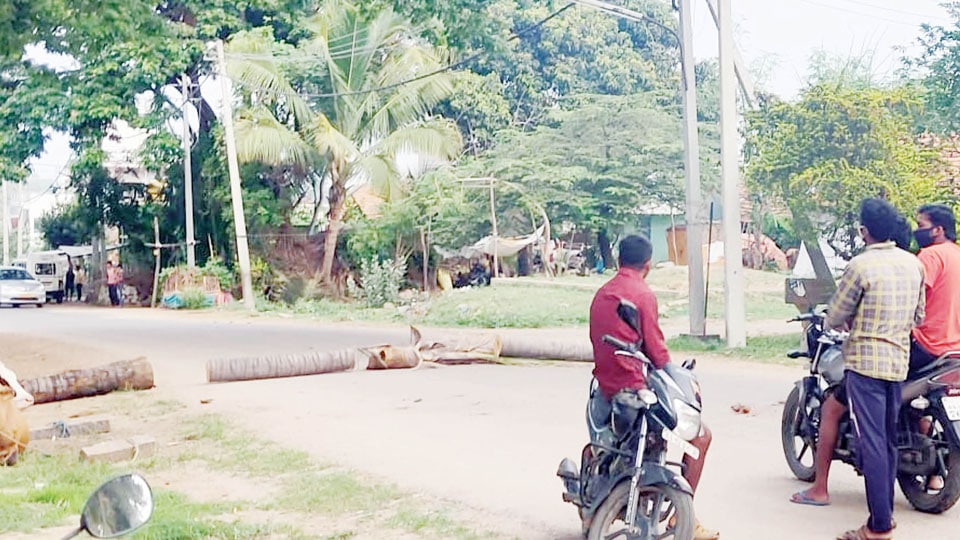 Srirangapatna: Family members of a COVID victim who had come to Srirangapatna (Gosai Ghat) from Bengaluru to immerse the ashes were turned away by villagers this morning.

The family was told that the Taluk Administration had banned the ritual of immersing ashes at Paschimavahini in Srirangapatna due to the pandemic. The family members told the villagers that they were not aware of the ban and had come here to immerse ashes as some priests had invited them saying that all arrangements would be made to immerse ashes.

Ever since the ban was enforced since the last week of April, people have continued to immerse ashes here and this had enraged the villagers. They alleged that some priests offer packages to the families to immerse ashes despite the ban. Today, villagers have blocked the roads leading to Paschimavahini with tree trunks, preventing movement.

Villagers said that they have no fear of the virus spreading from the ashes as all virus die while cremation. But people coming to Srirangapatna from various places could be potential carriers of the virus and they do not want to take the risk. The relatives of the departed soul will be in close contact with the priests performing rituals at Paschimavahini, Gosai Ghat, Sangama and B.G. Hole and the virus can easily form the infection chain, they argued.

In view of large crowds gathering at the ash immersion places, Srirangapatna Tahsildar M.V. Roopa ordered a ban on immersion of ashes and other associated articles in Cauvery River.

After the ban, the Police had erected barricades at ashes immersion spots at Paschimavahini, Cauvery Sangama, Gosai Ghat and Sopaanakatte in order to prevent people from performing the rituals of the dead.

But after a few days, the rituals again began with the connivance of some of the priests here, said villagers.

Speaking to Star of Mysore, President of Shaswathi Dharmika Kriya Samithi at Srirangapatna Dr. Bhanu Prakash Sharma said that while the ban on ash immersion was a welcome move, devotees must be allowed to immerse ashes at certain designated places.

“The Taluk and District Administrations can identify specific places for ash immersion and social distancing and sanitisation can be ensured. As there are arrangements now to cremate COVID and non-COVID bodies at all crematoriums, arrangements must be made to immerse ashes too. Immersion of ashes at places where rivers meet — especially at Paschimavahini — is considered holy. The administration must allow people to follow their faith,” he opined.