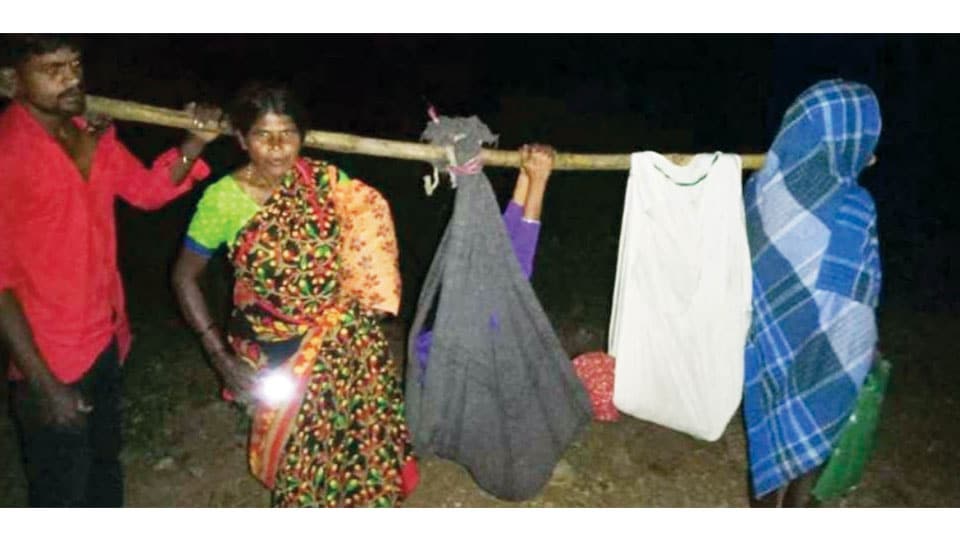 Hanur: At a time when the nation is celebrating the 75th year of independence (Azadi Ka Amrit Mahotsav), a pregnant woman in a tribal hamlet of Hanur taluk in Chamarajanagar district, who went into labour on Wednesday night, was physically carried by her family and other villagers in a contraption made out of a blanket as the village lacked cell phone connectivity and also had no transport access, which goes to explain official apathy.

The villagers of Doddane Tribal Hamlet located in the dense forest of MM Hills range in Hanur taluk carried the pregnant woman identified as Shakuntala in a blanket doli and walked for six hours on Wednesday night covering  a distance of 8 kms to reach the Primary Health Centre (PHC) at Sulwadi, which was the nearest hospital.

The villagers reached the Hospital early on Thursday morning and the woman delivered a baby boy at the Hospital sometime later.

The villagers were forced to carry Shakuntala by walk as all their efforts to contact the personnel of Janavana Sarige started recently by the Forest Department failed and also due to poor mobile connectivity network, it is learnt.

According to villagers, the Doddane Tribal Hamlet lacked basic amenities and local transport facilities. Though the Forest Department started Janavana Sarige for the benefit of villagers in the dense forests of M.M. Hills range, it remains inaccessible most of the times and as such they are forced to walk miles traversing through rough paths,  even in case of medical emergencies or any other exigencies.

Meanwhile, Hospital sources said that both the mother and baby were healthy.