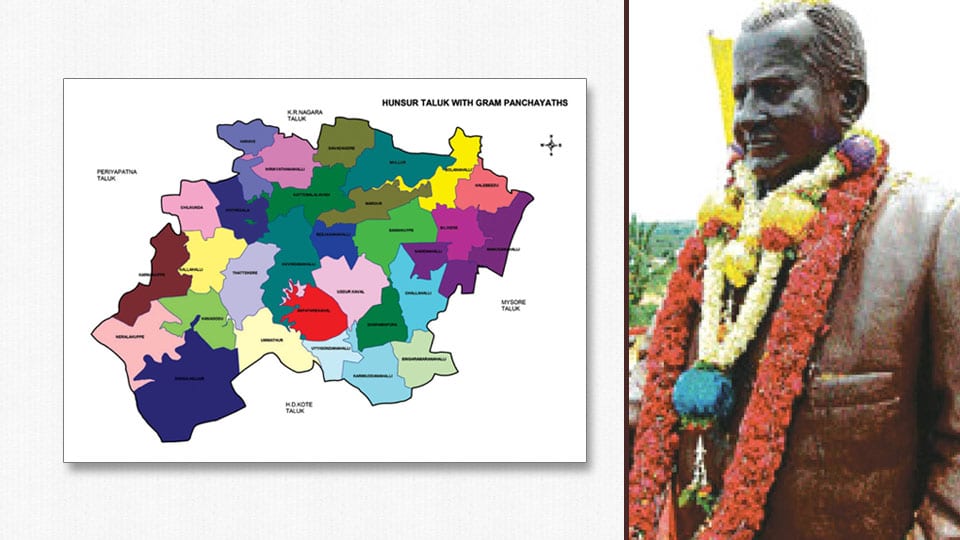 Hunsur: “Being an administrative centre for six taluks, Hunsur Sub-division should be separated from Mysuru District, be given a district status and be named after former CM late D. Devaraj Urs,” asserted former Minister A.H. Vishwanath.

Addressing a press meet at the Press Club here on Friday, Vishwanath observed that Mysuru District is facing problems handling two sub-divisions, 13 taluks and Mysuru City Corporation which necessitates carving Hunsur out as a separate district. He contended that the main rivers Cauvery, Lakshmanatheertha and Kabini along with Nagarahole National Park are parts of Hunsur which also boasts of good commercial and cultural activities not to exclude the political importance.

Vishwanath further said that Hunsur had given film personalities like Hunsur Krishnamurthy, Bhargava, Dwarakish and writers like Chaduranga and Ananthamurthy. He said that he would appeal Chief Minister B.S. Yediyurappa to create a separate Hunsur district, which can be named after former CM late D. Devaraj Urs, who hailed from Kallahalli in Hunsur taluk.

Highlighting the factors that can make Hunsur a district, he said that Geographical area, population, conglomeration of industries, educational institutions and agriculture together can make up the cause for a separate Hunsur District.

Stating that Hunsur has good road connectivity and an efficient transport network with KSRTC operating bus services to all important destinations, he said that Hunsur is also an industrial town with many Plywood, Furniture, Cotton, Brick, Coffee and other Industries.

Maintaining that Hunsur Teak-wood has earned worldwide fame, he said that the Avarekayi market at Bannikuppe is famous in the State. Also, H.D. Kote is famous for cotton crop, Periyapatna for maize and K.R. Nagar for paddy and sugarcane, he added. Former VSSN President Vasegowda leaders Ganesh, Annaiaha Nayaka, H.P. Satish and others were present.