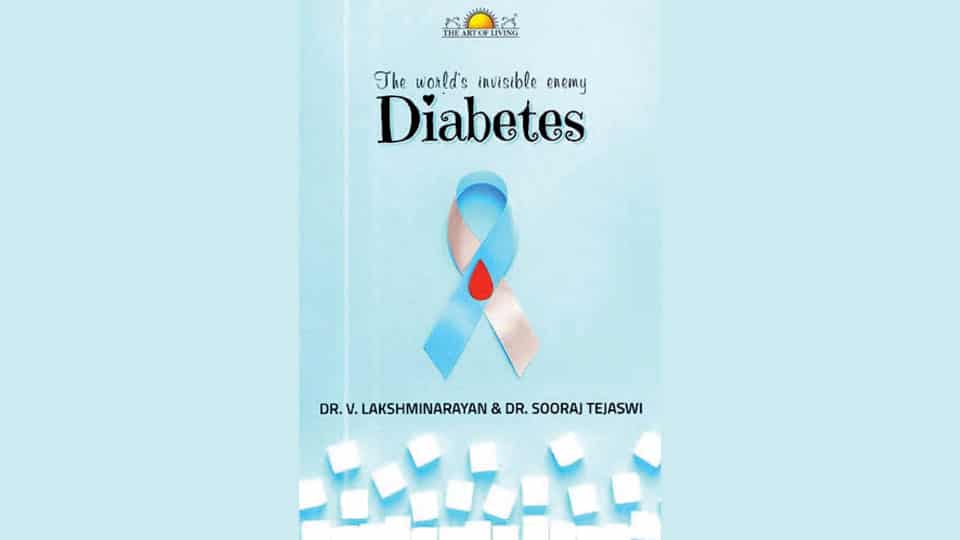 Visibility to the invisible illness

Indian  Medical Association (IMA), Mysuru Chapter, had organised an event in the city a few years ago in which talks were delivered by doctors with years of medical practice attending on sufferers of diabetes. One of the speakers expressed, partly in lighter vein, that diabetics are more knowledgeable about the illness than the doctors treating them. One of the speakers in the event was Dr. V. Mohan of Madras Diabetes Research Foundation, a leading name in both research on the ailment and its treatment for many years. In his foreword to the publication, he has showered high praise to the first author Dr. V. Lakshminarayan, for not only his qualities of head and heart but also his professional track record in the specialist area of   treating diabetes. The co-author, Dr. Sooraj Tejaswi, son of the first author, is on the faculty of University of California, USA, specialising in Gastroenterology.

Paying rich tribute to Dr. Mohan in his appreciation of the publication, Dr. M. Rama Jois, Rajya Sabha Member and former Chief Justice of Punjab and Haryana High Court as well as former Governor of Jharkhand and Bihar has observed that this publication is an improved version in English of the author’s work in Kannada titled (Madhumeha Dashavyadhigala Moola) adding that it is an invaluable contribution.

Acknowledging the valuable inputs of many to his authoring the publication, Dr. Lakshminarayan has mentioned the name of Dr. S. Venkat Rao (late), Nutrition Scientist at the Mysuru-based Central Food Technological Research Institute (CFTRI) for facilitating experience and background over more than a decade that led to writing this book.

The book has been organised into three parts — the first part comprising nine chapters, the second part 14 chapters and the third seven chapters. The reader unconsciously gets glued to the publication after getting to know the history of the illness as presented by the author along with elucidation of what diabetes is and how it is caused. Signs and symptoms of the illness explained in the book enrich the understanding of diabetes, including the case of children.

The presentation of all that one needs to know about diabetes doesn’t demand knowledge of the medical terms used by the author as every such term is explained in the language also of lay readers.

The central message of the author is that diabetes can be monitored with guidance from the doctor, despite the disorder having being rated as an epidemic, with an estimated 77 million victims in India at present. Each patient of diabetes is unique and the key is individualisation of treatment, according to the author, who recommends preventive measures.

The uncomplicated charts and graphics presenting simple exercises to keep the illness in check have enhanced the book’s value as a virtual life-partner to the patients. Diet, medications and habits to be eschewed have been presented using script marked by lucidity which every reader must be thankful to the authors. The two-page index, presented alphabetically, facilitates quick choosing of the specific parts of the publication for readers in a hurry.

In short, the publication priced at Rs. 499 is priceless and merits to be possessed by even those who are spared the illness. The doctors have answered virtually all FAQs (Frequently Asked Questions) about diabetes.

Book Talk Diabetes
Promoting Participation of Persons with Disabilities and their Leadership
What manner of a man is this Rajinikanth?