Home » Columns » Abracadabra By K. B. Ganapathy » What manner of a man is this Rajinikanth? 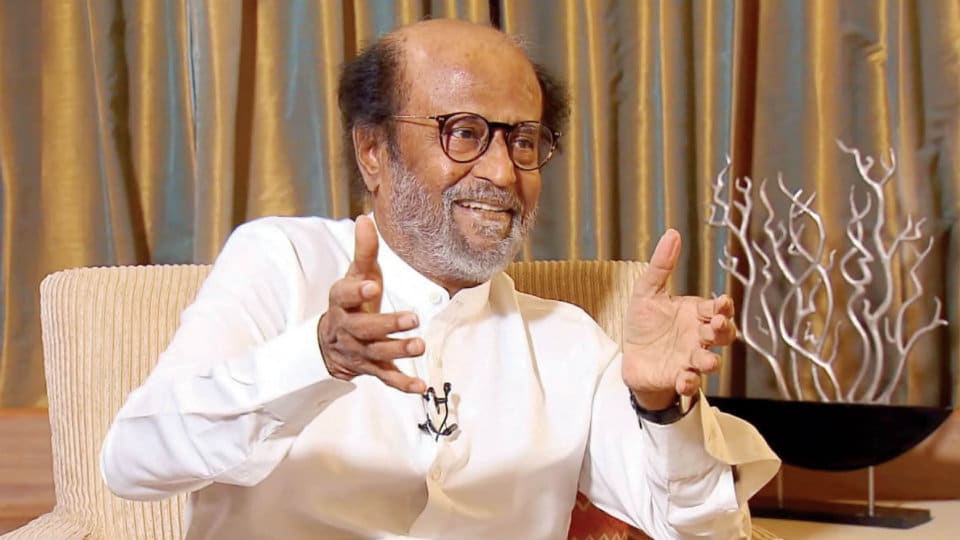 What manner of a man is this Rajinikanth?

Recently Supreme Court Judge Justice N.V. Ramana had said that the fate of the country would depend on the character of the leaders administering it. How true and valid an opinion, specially in the context of our country’s administration conducted since 70 years.

It is only after 2014 when Narendra Modi became the Prime Minister the country’s fate, riddled with terrorist attacks, corruption, policy paralysis, inordinate delay in taking decisions or procrastinating  decision-making indefinitely — on J&K Article 370 and 35A, Ayodhya, GST, Defence Purchase, Abolition of Triple Talaq etc., no end — seemed to be changing for the better. It is because of the character of our new leader Modi. Because of the extraordinary humane and patriotic character of one leader who had the courage to take decisions — Narendra Modi. I shudder to think what would have been the fate of this country if the same UPA Government had continued for further period from 2014 with puppets as PMs and courtiers as Ministers. Perish the thought.

To humour, I guess those thousands of Gods and Goddesses in the Hindu pantheon must have brought in Narendra Modi to save the country from the endemic communal and vote-bank related social disharmony, staggering development, corruption, periodic violence and finally, God forbid, Balkanisation.

The provocation for these rambling thoughts came to me on reading about Rajinikanth in an article after he was honoured with the Icon of Golden Jubilee Award at the recently concluded International Film Festival of India (IFFI) in Goa and after he gave an interview to Doordarshan (DD) which I happened watch. Both were interesting because it revealed the man and his mission with some messages.

Wonder how, in a democracy, without being in politics one could take on such responsibility? Social service, yes. But State’s development? Rajini may not join BJP, not even support it or take its support in case he plunges into State Assembly elections. In that event, if need arises for a political alliance with whom will he go? Kamal Haasan? Everybody knows Kamal Haasan’s political ideology.

Well, that will be like expecting water and oil to mix into a compound! Oh! Yes. I forgot the miracle that keeps happening in Indian democracy. Just now, are we not witnessing Shiv Sena (considered the rank Hindu Communal Party), Congress (considered the cornucopia of Secularism) and the  crony Capitalist Nationalist Congress Party (NCP) jettisoning their ideology and embracing the newly-discovered ideology POWER? So in Tamil Nadu, Rajinikanth  and Kamal Haasan too may join hands to worship the Goddess of POWER !

Now let me come to the DD interview. I liked it because it had lessons for old men like me.

Lesson No. 1: To be happy, be natural  ‘I am so before the camera and off the camera’.

Lesson No. 2: One must love what one does. Only then there will be success.

Lesson No. 3: This was told to him by Amitabh Bachchan, his friend. ‘Always be busy. It will help keep good health and make you forget your age!’

2 COMMENTS ON THIS POST To “What manner of a man is this Rajinikanth?”