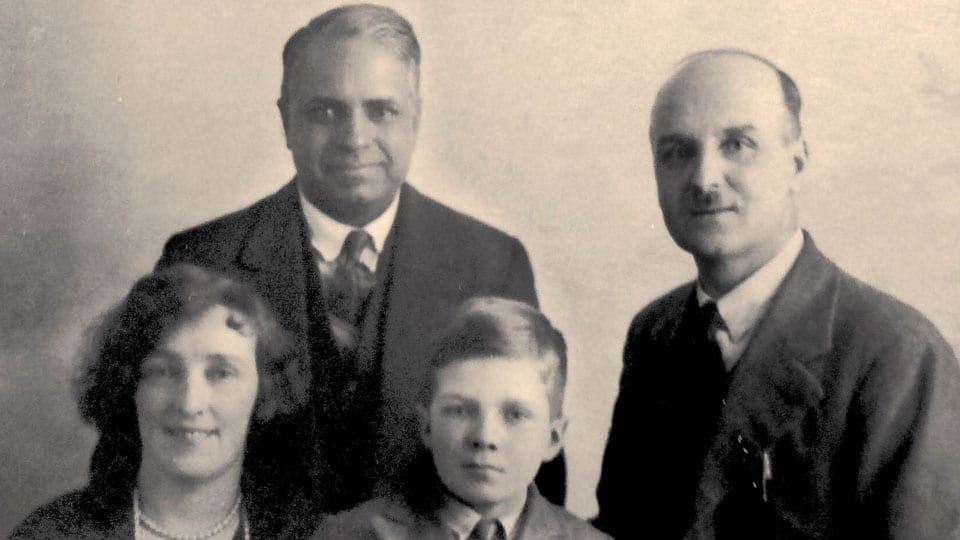 Many of us elderly folk are now sequestered at home. The television focuses on COVID-19, with its seemingly sentient malice against humanity, or the tragedy of Afghanistan. Books, music and films are a comfort. But nothing can compare with the companionship of friends.

“Visiting” was an enjoyable social activity in old Mysore when friends paid “calls” on one another. My father was an engineer of the Mysore State Railways. We lived in the first of the railway bungalows on KRS Road, my childhood home. This was our first social circle.

These memories are from my childhood, others garnered from family lore. A very early recall is of the morning visits of “Bahadur” [the only name I knew him by], an Ursu friend of my father. He would ride into the garden after his morning gallop, wheeling his horse to a stop at the portico. Bahadur always stayed outside, chatting with my father, patting the restive animal.

My parents, M. Venkatesh and Mukta Venkatesh, spoke of Mr. Sinclair, the English General Manager of the Mysore State Railways. Mrs. Sinclair was sociable and attended the meetings of the Bharati Sthree Samaja of the Railways. Their niece, Miss Morgan, from England would visit my parents with her pet dachshund, Charlie. On her farewell call, Miss Morgan was in tears; English quarantine rules forbade her to take Charlie back with her. He was left behind, a lonely English dog in Vontikoppal’s Railway enclave.

After the Sinclairs, came Rohinton and Diana Mirza. Fusing Parsi styles and western fashion, Mrs. Diana Mirza was an exotic personality. Her unmarried sisters were the Kotawalas, Nurgesh who wrote poetry, Zarina who contributed society news to a newspaper. My mother served them cake from Hamza Bakery on Sayyaji Rao Road and tea from her green and white Gwalior pottery tea-set. Embroidered napkins, once bought from itinerant Chinese salesmen in Madras in the 1920s, were taken out too.

More traditional ladies like Mrs. Y.K. Ramachandra Rao or Mrs. Ramanujam with her daughters Malathi and Lalitha, would drop in, politely refusing refreshment. When they left, they were offered kumkum, reverentially applied to the forehead, turmeric touched to the throat. Coconuts placed on betel leaves,  areca nuts, flowers and sometimes a length of silk [Khana] were also given. They parted with the graceful Karnataka goodbye, “I will go and come back” [Hoggiddu baruthene].

Tripurasundari Devi [the wife of Sri D.V. Narasimha Rao who established the National Institute of Engineering] and Srimati Gowramma Gundappa and their families were our close friends.

Sister John of the Good Shepherd Convent had a Railway connection. Her father, Mr. Dorechetty was a Railway colleague. Beloved for her good nature and admired for her prowess in both Western and Karnatak music, Sister John was always warmly welcomed.

Outside the Railway circle were Professor M.V. Gopalaswamy [of Akashvani fame] and  Kamala Gopalaswamy. The latter and Mukta were sometimes mistaken for each other because of their startling resemblance. Sitting in his favourite chair under the fan, Professor Gopalaswamy would talk about Psychology, the radio and other topics. I still recall his recounting an anecdote about experiments on chimpanzees, where mother love and self preservation were in conflict.

At the end of Vivekananda Road stands, unchanged, the house of Dr. H.V. Ramaswamy and Parvathamma. He was a well-known doctor, also affiliated to the Mysore Palace. The daughters were Kamala and Kaveri.The latter’s wedding to Dr. Gopal, the son of Dr. S. Radhakrishnan, was a great event in Yadavagiri. She was named “Indira” after her marriage. When Mukta visited Delhi, she was invited by Indira Gopal to Rashtrapati Bhavan. She said this was “the grandest visit I ever paid.”

Mukta, always informal, called on a doctor friend, grabbing the gardener’s shabby umbrella against the sudden monsoon rain. The doctor’s children were at the door. Before admitting Mukta, they asked doubtfully, “Are you an Aunty or an Ayah? You sound like an Aunty but you have an Ayah’s umbrella.”

Mrs. Leela Anjanappa, wife of a businessman, was a well-known personality. She headed the Girl Guide movement in Mysore, receiving the Silver Elephant award in recognition. She also did social work, starting an organisation called Makkala Koota for poor children. She had a following as an elegant lady, setting standards for “morning and evening wear.” Admirers noted her dress at her public appearances.

Friends from Mysore University like Professor and Mrs. V.L. D’Souza, their daughter Joan and, occasionally Professor Eagleton, a brilliant speaker, would call. Eagleton was known to his irreverent students as “Garudachar.” Father Audiau was the Principal of St. Philomena’s College, his tenure ending in 1956. A tall Frenchman with a stubby silvery beard, he was a commanding presence in his white cassock. His fluent English was accented by his native French, best understood by Mukta.

Kamesweramma Kuppuswamy was a social reformer, her husband, Professor Kuppuswamy, taught Psychology at Mysore University. She worked for widow remarriage and women’s’ education. She established the “Mathrumandali” which functions to this day. In appreciation of her social work, a road was named “Geetha Road” after her first daughter, Geetha, was born. It is there even now but its origins are forgotten.

Dr. Kale, a scientist with the CFTRI and his Polish wife were popular in Mysore society. Their daughter, Lalitha [Lily], was the most beautiful woman I have ever seen. There was always a hint of sadness in Mrs. Kale’s eyes.  She had lost her entire family in Poland during the war. Lily married the mathematician Dr. Harish Chandra. The wedding luncheon, held in Hotel Metropole, was elegant; served in English style with courses accompanied by wines, with champagne for the toast. The couple went to Yale in the US. Dr. Kale passed away sometime later but  Mrs. Kale stayed on in Mysore with her pet dogs, Zippy and Fifi.

My mother and I visited a home called “The Land,” belonging to the Van Ingens, the well-known taxidermists. Our hostess was Barbara Van Ingen, the wife of Botha Van Ingen. Her father was the director, Robert J. Flaherty, who produced the 1937 film, “Elephant Boy” starring Sabu in Mysore. Barbara was creative; she displayed a vivid sketch of her father playing the violin and her other paintings. She became a close friend of Mukta, visiting her in Yadavagiri, writing often after she left for the US. Her son, Mike Van Ingen, is also a talented artist who makes vivid paintings of wild life, particularly elephants.

Life then was a microcosm of India. The friends we interacted with so happily are now regarded as luminaries of their time, representing the unique values of our city of Mysore. That world is lost, only these transient images bringing it back to a fleeting life.

Girija Madhavan LOOKING BACK
Why not block this unmotorable road?
Top-notch ways to purchase bitcoins online and offline!

4 COMMENTS ON THIS POST To “Visiting friends in old Mysore”