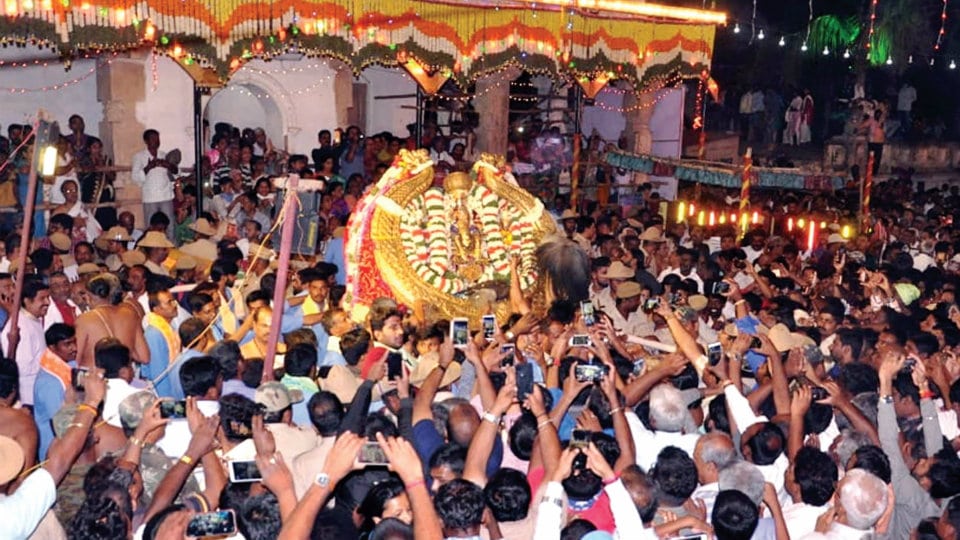 Melukote: The historical ‘Vyramudi Utsava’ was held on a grand scale last evening at Sri Cheluvanarayanaswamy Temple here attended by lakhs of devotees.

After getting released from Mandya District Treasury, Vyramudi and Rajamudi crowns were brought under tight Police security to the Parvathi Mantapa. They were taken in a colourful procession to Cheluvanarayanaswamy Temple by 6.30 pm.

The crowns were examined by Mandya DC N. Manjushree, SP D. Shivaprakash, Pandavapura Assistant Commissioner V.R. Shailaja and other officials before handing them over to the Chief Priest of the Temple. The ‘Utsava Murthy’ of the presiding deity was adorned with jewels and Vyramudi crown and made ready for the commencement of the grand procession at 9 pm.

The procession entered the Rajabeedhi and the waiting devotees went ecstatic at the glimpse of the idol of the deity with the glittering Vyramudi crown. Several devotees had come from Tamil Nadu, Andhra Pradesh and Kerala also. Infosys Foundation Chairperson Sudha Murty, District Minister C.S. Puttaraju, MP L.R. Shivaramegowda and others were present. Huge LED screens were installed near Temple for devotees to witness the proceedings.

As part of the event, Yoganarasimhaswamy Temple, Cheluvanarayanaswamy Temple, Kalyani, Mantapas, the Hill near the temple and Government offices were beautifully illuminated.

KSRTC had provided additional buses to ferry people from Mandya, Mysuru, Hassan, Bengaluru and other places. The District Administration had provided good medical service and drinking water facility with utmost importance for cleanliness.

Police had provided adequate security. The procession was well cordoned with barricades to prevent people from going very close to the crowned idol.

The Vyramudi and Rajamudi crowns, along with other jewels, were released from  Mandya District Treasury at 7.30 am under the supervision of Mandya DC N. Manjushree, SP D. Shivaprakash and ZP CEO K. Yalakkigowda. The crowns were kept for public viewing for a short period.

A matter of faith

The vehicle carrying the crowns arrived at Mini Vidhana Soudha in Pandavapura, greeted by thousands of people. In a surprise gesture, Assistant Commissioner V.R. Shailaja and Tahsildar Pramod L. Patil carried the two crowns on their heads to Taluk Office premises and offered puja.