Home » News » War Room, COVID Mitra of no help for this ASHA worker 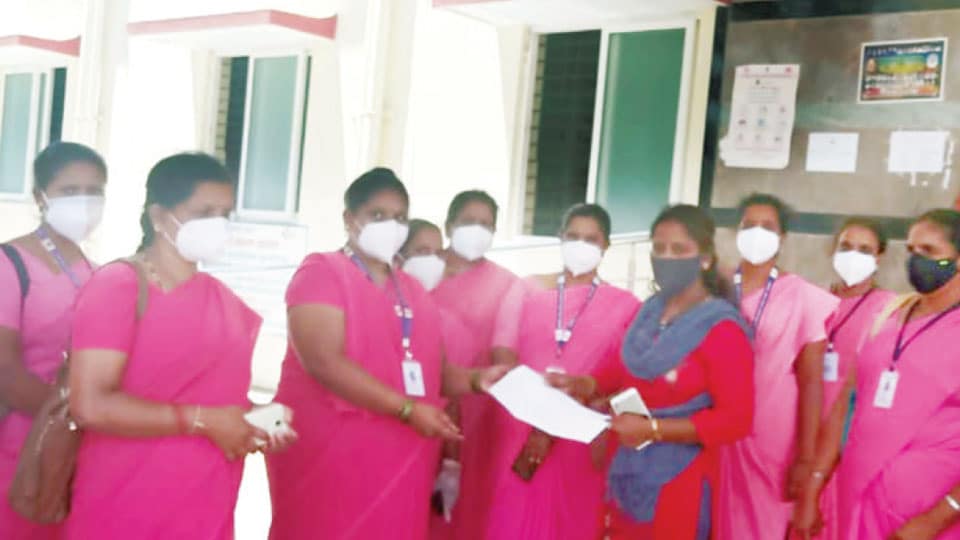 War Room, COVID Mitra of no help for this ASHA worker

Mysore/Mysuru: The second wave of COVID-19 crisis has meant risky and longer hours of work for frontline workers, doctors and the Police who are exacerbated by unsafe working conditions, hostility from their communities, and minimal compensation or support from the authorities. So much so that even if their loved ones contract the killer disease, there is no one to help.

An ASHA worker from T. Narasipur had to run from pillar to post to admit her COVID-infected husband, who was facing breathing difficulties, into a hospital in Mysuru. She even travelled to Mandya hiring a private cab in search of a bed and had to beg for treatment.

This incident comes at a time when higher officials, elected representatives and Ministers are claiming almost every day that all is well in Mysuru and bed management system has been streamlined. So pathetic the situation is that even an ASHA worker cannot secure a bed for her husband despite being a frontline worker.

ASHA (Accredited Social Health Activist) workers, mostly underpaid, are tasked with over 50 responsibilities, some of which include COVID awareness, vaccination, community health awareness, maintaining records of children, counselling women on pregnancy and birth preparedness, and helping community access healthcare facilities. Kanyakumari, an ASHA worker from Chamanahali village at Bannur was at the frontline, efficiently discharging her duties.

Her husband, 42-year-old Swamy contracted the disease two days back and on Sunday night he was facing severe breathing problems and his oxygen saturation level was hovering between 80 and 84. Swamy was a diabetic and Kanyakumari made desperate calls to the Mysuru District War Room and got unsatisfactory replies that did not cater to her immediate needs. She then approached COVID Mitra and here too she faced difficulties in accessing a bed and was asked to go back and put Swamy in home isolation as his condition was not serious.

First she tried for a bed in jurisdictional T. Narasipur Taluk and later Mysuru where she was asked to isolate her husband at home. “I was desperate as his oxygen saturation level was rapidly falling below 85 and his sugar level was more than 200. His health was deteriorating and I could not keep him at home as I live in a small house with a single washroom,” Kanyakumari said.

She visited COVID Mitras after her desperate calls to the War Room yielded nothing. “They said we will be contacted, but no one did and my husband’s condition was bad. And we took him to Seth Mohandas Tulsidas Hospital in Mysuru but they refused admission though there are beds reserved there for frontline warriors and their families,” she said.

To Mandya in a cab

She approached some Private Hospitals in Mysuru but they demanded advance payment of more than Rs. 50,000 to admit him and Kanyakumari could not even think of giving such an amount. Desperate to save her husband, she took a cab to Mandya but had to return as the doctors there refused admission as the patient was from Mysuru.

After her ordeal was raised by fellow ASHA workers and their Union, Mysuru authorities assured a bed here. But when Kanyakumari took her husband to the designated COVID-19 Hospital, a bed was refused. Finally, after another round of intervention by the Union with the Narasipur Taluk Health Officer, her husband was shifted to T. Narasipur Taluk Hospital where he was given an oxygenated bed.

Following the incident, the colleagues of Kanyakumari and the Union had planned a protest in front of the T. Narasipur Taluk Office this morning. But as there is no permission for protests, they submitted a memorandum that states that if the same attitude of the administration continues, they will be forced to stop work. A memorandum was submitted to the Taluk Office.

P.S. Sandhya, State Treasurer of Karnataka Rajya Samyuktha ASHA Karyakartheyara Sangha and Manjula, an ASHA worker at Bannur said that if today Kanyakumari has faced such an ordeal, tomorrow the turn might be theirs. “We are putting our lives at risk and officials talk about how smooth hospital admission and reaching medical care is. But the reality is far from truth. We health workers are showered with praises all the time but when it comes to our own health and the health of our family members, we don’t get any help,” they regretted.