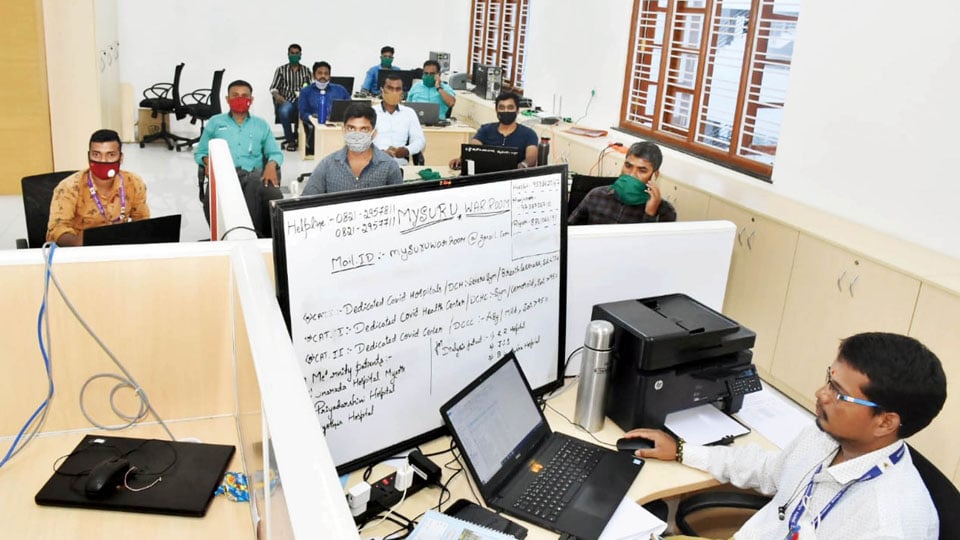 Mysore/Mysuru: They work silently behind the scenes to defeat an invisible enemy called COVID-19 which has shaken the entire world. Had the Mysuru District Administration not set up the much-needed ‘War Room’ it  would have been a big catastrophe by this time with unchecked Corona positive cases and deaths.

Managing beds for Corona positive patients had been one of the major challenges faced by the State Government due to spike in positive cases during the months of July, August, September and October. In Bengaluru, a few patients died due to non-availability of beds. This made the State Government to come up with the idea of setting up a ‘War Room’ to streamline Corona management. This not only put everything in place but also enabled the needy patients to get treatment in time.

Taking a cue from Bengaluru, the District Administration decided to set up a COVID War Room at the new District Offices Complex (DC Office) in Siddarthanagar, following spike in positive cases and death rate. Before that, the fatality rate had surpassed the national average due to utter chaos for almost a month. Patients were struggling to get beds both in Government and Private Hospitals following total confusion. Even officials were not aware of the beds available in Hospitals. There were occasions when Corona patients were sent back after waiting for 2-3 hours for non-availability of beds.

While the first three Officers took the responsibility of managing the War Room, Sridhar attended the meeting convened by DC Rohini Sindhuri to take stock of the situation.

During initial days, these four Officers have slogged day and night with or without food attending to phone calls made by anxious friends and relatives of Corona positive patients seeking help to arrange beds. The War Room was given charge of triaging patients, bed management and shifting of patients.

READ ALSO  Jab for specially abled at Govt. School for the Blind

Speaking to Star of Mysore, Dr. Seethalakshmi said, “I can say with a sense of happiness that not a single Corona positive patient has died without oxygen while shifting to hospitals. We have rescued patients whose oxygen level had dropped down to 40-45. Some recovered patients even come to thank us for offering them timely help. This gratitude by such people is greater than any award in the world.”

“At the same time, I felt sad when I was told by ambulance drivers that some patients had to wait for two to three hours in the vehicles due to delay in availability of beds either in Government or Private Hospitals,” she told in choked voice.

Worst seems to have ended

Having been on COVID duty for over four months, Dr. Seethalakshmi says with a sense of pride that ‘worst seems to have ended if the fall in Corona positive cases and death rate are an indication.’ The months of June, July, August and September were worst with a flood of calls from anxious citizens. The War Room personnel have handled over 1,000 telephone calls daily. The landline telephone would be busy from 8.30 am to 10 pm without break. After hectic four to five months, now they were a bit relaxed since the positive cases have reduced below 150 and death rate has been single digit at least in the last 15 days.

Fortunately, the number of positive cases has dipped drastically from Chamaraja, Krishnaraja (KR) and Narasimharaja (NR) Assembly Constituencies in city. “Our aim is to record Zero positive cases and zero deaths in order to make Mysuru a Corona-free district, she stated.

Once a person tested Corona positive, the message is automatically flashed to Apthamitra app which will decide whether the patient can be home quarantined or needs hospital admission. All details pertaining to availability of beds in General Ward, Oxygenated beds, normal beds, Ventilators and ICU beds of both Private and Government Hospitals are readily available on dashboard. Depending upon the requirement, the beds will be allotted to them. “A few weeks ago, there used to be mad rush for beds but now only 30 per cent COVID allotted beds are occupied. This gives us a solace about the situation slowly coming to normal in the district,” she sighed.

Dr. Seethalakshmi said patients still prefer to undergo treatment at the COVID Care Centre (CCC) established at the Academic Bhavan of KSOU near Mysore Airport in Mandakalli, which is being very well managed by its Nodal Officer Lt. Col. Dr. Ashok. After that, they will opt for private hospitals. Now the system is so well managed that almost every officer of every Department has been put on COVID-19 duty no matter what work they would do. This collective responsibility helped a lot to flatten the COVID curve in the district, she observed.

“We saw worst situation in the past due to outburst of Corona positive cases plus double digit deaths. Now, we are seeing good days with the cases declining day by day. I have never felt tired despite working day and night for the last four months serving patients. I feel proud that I could save people from the jaws of the invisible and unknown enemy,”  Dr. Seethalakshmi signed off.