Home » News » We could not bring down infections despite efforts, says MP 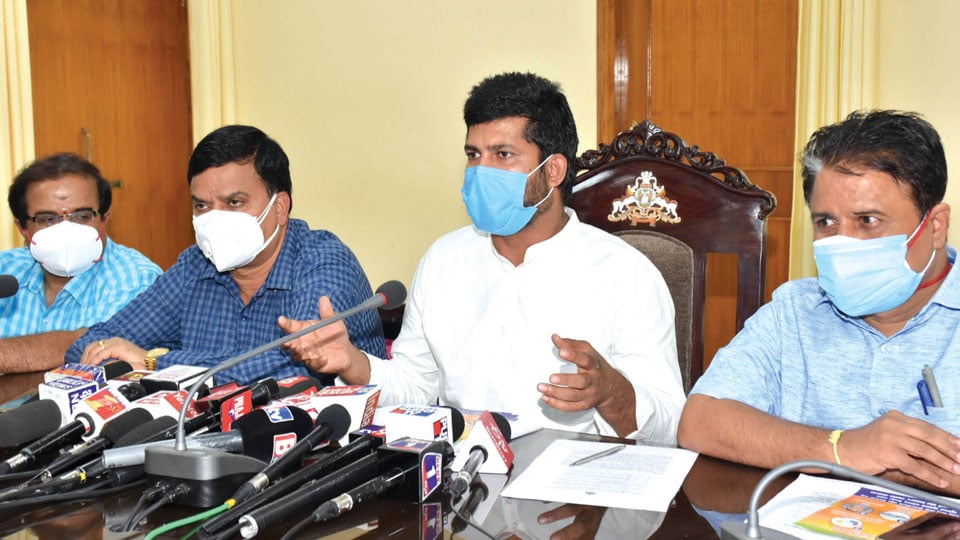 We could not bring down infections despite efforts, says MP

Mysore/Mysuru: Maintaining that a  more stringent lockdown had to be enforced as COVID infections could not be brought down in the past two weeks, MP Pratap Simha appealed to the citizens to stay indoors and step out only if necessary.

Pointing out that the District Administration has allowed shopping of essential commodities twice a week (Monday and Thursday) till June 7, he said that people should show restraint and not unnecessarily enter into arguments with the Police or other officials.

Hopes rural case-load may come down in 15 days

Expressing concern over increasing COVID cases in rural parts of the district, he said that District In-charge Minister S.T. Somashekar visited many rural parts for ascertaining the situation. Observing that negligence in the initial stages had led to severity of the disease or fatalities, the MP expressed hope that the case-load will come under control in a fortnight.

Noting that stringent lockdown was enforced a little bit late in Mysuru after experimenting on lockdown with limited restrictions, Simha said that though the cases came down in urban areas, rural parts saw a sudden spurt in cases, mainly due to unchecked movement in villages. Now with a more stringent lockdown in force, the Police have been asked to ensure strict following of COVID appropriate behaviour in villages too.

READ ALSO  COVID: 16 personnel of Forest Department die in as many days

No grudge against anyone

Replying to another question on his displeasure with Mysuru DC, Simha maintained that he does not have any grudge against anyone. Arguing that he will laud officials when they do good work, he said likewise, officials who show apathy in their work will be questioned and as such there is no question of affection or hatred here.

Contending that upon receiving certain suggestions from people’s representatives, the Additional DC and ZP CEO toured villages for monitoring COVID control, he said that heeding to important suggestions and advice will certainly help in understanding  and rectifying the lacunae in the system.

Responding to another question on whether the officials were responsive to his work, Simha said that people’s representatives will work with concern for the welfare of the people and it does not matter who will join them and added saying that he will simply have to work harder if the officials are not responsive.

Speaking of formation of Task Forces Simha said that they were formed as officials had  failed to address Bed, Oxygen, Ventilator and other COVID issues and added saying “As people’s representatives we venture into field work in right earnest without wasting time on advising officials. And now the problems that once existed have eased  after officials and people’s representatives worked in co-ordination. It is this co-ordination that helped in addressing Oxygen issue in time.”

Recalling that he has worked in co-ordination with top officials of the district in the past, Simha said that he has great respect for C. Shikha, who was the DC of Mysuru for three years. He also recalled the work he had done with the then DC Randeep in making Mysuru enter the Guinness Book of Records on World Yoga Day and subsequently with Abhiram G. Sankar in the battle against the deadly pandemic which broke out last year.

He also recalled that he learnt a lot from  previous DC Abhiram Sankar on assigning tasks to officers for taking on the deadly contagion.