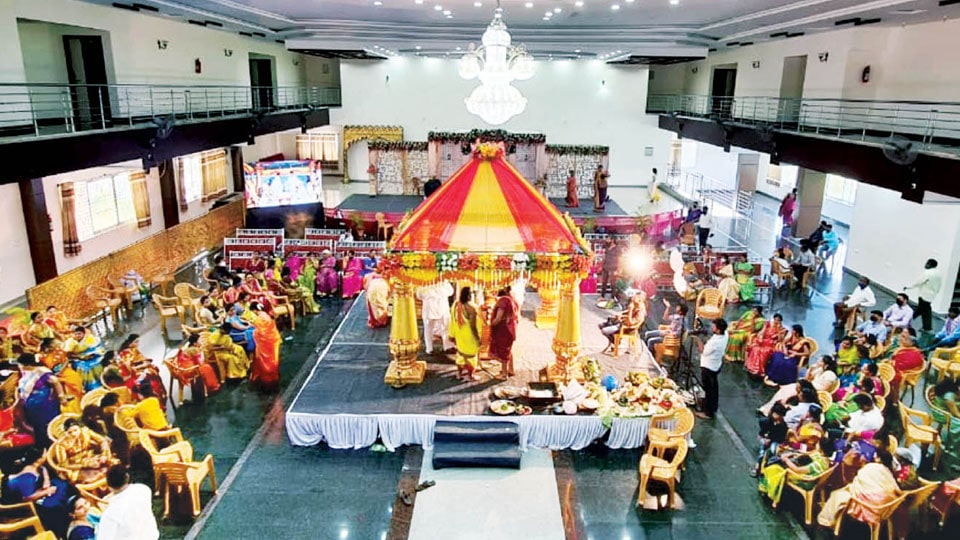 Mysore/Mysuru: Seven months after silence, the Kalyan Mantaps came alive with the sounds of wedding bells in almost 130 choultries of the total 150 in the city on Oct. 28 and 29, which were said to be the most auspicious days in the current season.

The sounds of traditional valaga and chanting of mantra reverberated in the marriage halls. The guests in colourful attire added festive look to the choultries that wore desolated look since March third week due to imposition of Janata Curfew across the country by the Government of India owing to outbreak of COVID-19. It took almost seven months for the Central Government to relax rules especially for the marriage halls as they had identified this as possible spreader of COVID due to crowd gathering.

Around 20 choultries did not have the marriage function since they had given the premises on rent for various exhibitions. However, all the marriages were held as per Standard Operating Procedures (SOPs) issued by the Union Health Ministry. As per the guidelines, the Manager of choultry must ensure the strict implementation of safety norms like thermal scanning, providing hand sanitiser and physical distance, failing which case will be filed for negligence.

Not ready to take chances, the owners had given strict instruction to the Managers to put the staff on duty to screen every person before allowing them to enter the marriage hall and asking people inside the hall to maintain social distancing. Entry was denied to those who failed to wear masks. Even the bride and groom had to wear mask no matter whether it suited their wedding dress. In the dining hall, only two chairs were put instead of usual four chairs per table to maintain social distance.

Buffets were held in most of the choultries to prevent the people from sitting in close rows. Orchestra was not allowed in any choultry as precaution. Even the guests were allowed to dining hall in batches to avoid large congregation. Only illumination of the choultry was allowed.

K.R. Sathyanarayan, President, Mysore Kalyan Mantap Owners Association, told Star of Mysore that all the marriage halls were strictly following the Covid guidelines in the interest of everyone. The halls were re-opened after a long gap and necessary safety measures are in place. In this situation, the Mysuru City Corporation (MCC) has imposed double tax on the choultries despite knowing the fact that their premises had remained closed for almost eight months. The owners have suffered a huge loss and finding it difficult to pay salary to the staff members. The Association has convened a meeting to urge the MCC to waive off tax of current year because of Coronavirus. The tax imposed by the MCC was highest in the State, he noted.

It is learnt that some choultry owners are offering discount ranging from 10 per cent to 30 per cent to woo people to book halls following heavy losses suffered by them in the last seven months. They are optimistic of the business to pick up once the situation returned to normal.