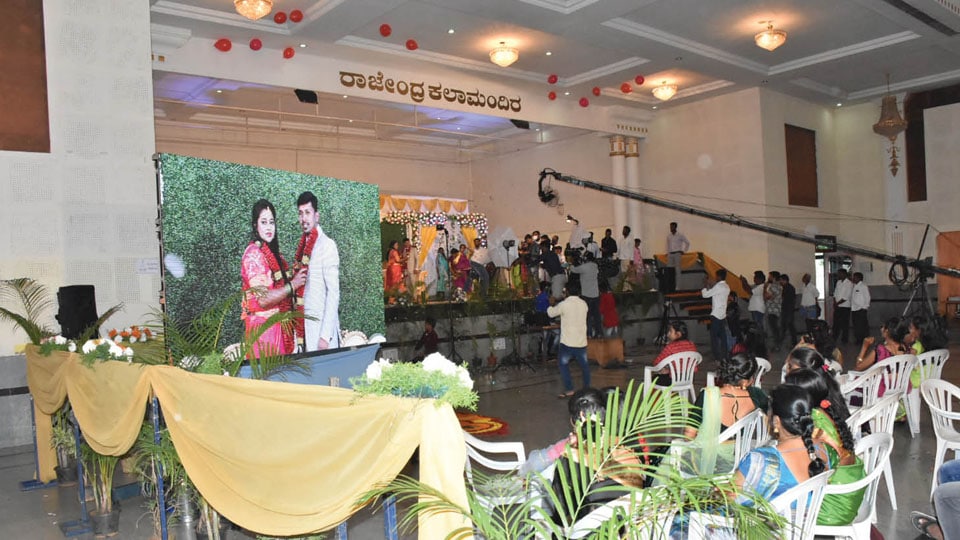 Mysore/Mysuru: Today (Feb.14) is Valentine’s Day and celebrations were subdued in city, thanks to social media campaigns against the celebrations as there were calls to observe the day in honour of soldiers of Central Reserve Police Force (CRPF) on the second anniversary of the Pulwama terror attack instead of observing the day as Lovers’ Day.

Forty CRPF personnel had lost their lives in the terror attack after a suicide bomber rammed an IED-laden vehicle into the convoy carrying them on  Feb. 14, 2019.

On the other side, this year’s Feb. 14 is an auspicious day for events like weddings, naming ceremonies and house-warming ceremonies. As such, all the Choultries and community halls in Mysuru reported 100 percent bookings for weddings. There are 82 Choultries in city and over 130 Choultries in the district and all of them were booked. Moreover, the removal of COVID restrictions on wedding gatherings — now 500 people can gather at a wedding — boosted the ceremonies and attendance.

According to noted priest Dr. Bhramarambha Maheshwari, Feb. 14 falls on the first Sunday (today) of Maagha Maasa, Thrithiya Dina and Shukla Paksha. It is the most auspicious day for weddings. Chief Priest of Chamundi Hill Temple Dr. N. Shashishekar Dixit told Star of Mysore that according to Hindu Almanac, there are four Sundays in Maagha Maasa and the first Sunday is the most auspicious.

“All places where river water flows like in Triveni Sangama at Bhagamandala in Kodagu, Srirangapatna, T. Narasipur and other places are considered holy to bathe on this day. People pray and perform pujas to Lord Sathyanarayana on this day,” he said.

Mysuru District Choultry Owners Association President K.R. Sathyanarayana said that today all the Choultries in Mysuru are booked for weddings. Not only Choultries but community halls, party halls in hotels too are booked. “After the COVID-19 pandemic surfaced in March last year, this is for the first time all the Choultries in Mysuru are booked. But we are following the guidelines and even the people are wearing masks and are sanitising at each step,” he said.