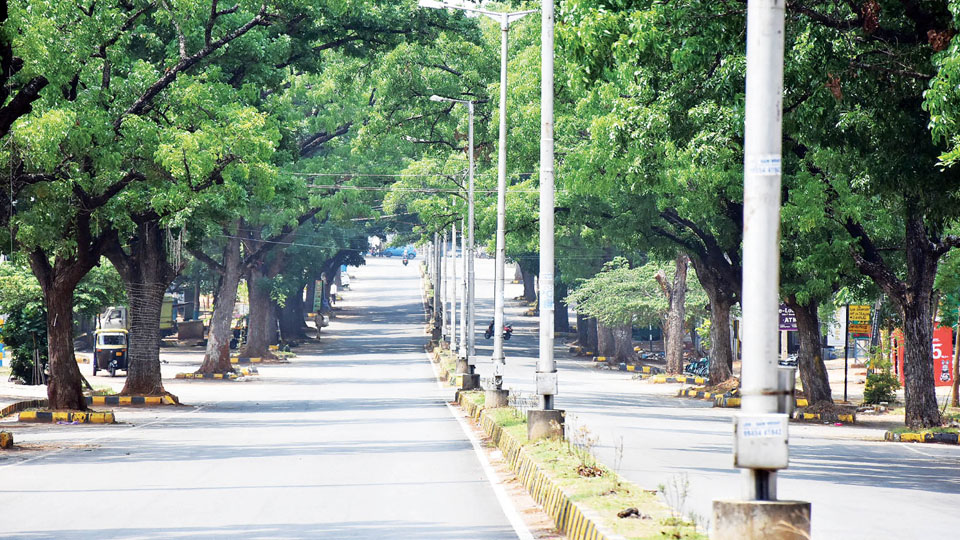 Mysore/Mysuru: The city wore an eerily calm look for the second day on the Day 2 of the first weekend curfew of 2021 enforced to contain COVID-19.

As the Police allowed essential services between 6 am and 10 am, people thronged supermarkets, grocery stores and vegetable markets in various localities. Today, over 80 check-posts were set up where the Police questioned people and motorists loitering around public spaces without any purpose.

Vehicle registration numbers were noted and motorists were warned they will be fined for needless movement. In a way,  the city was smothered to silence by the killer virus for the second day of the weekend today. Not a single bus moved from either City Bus Stand or Sub-Urban Bus Stand. Except for hotels that were limited to takeaways and medical shops, all shops including milk booths were shut.

In their eagerness to buy meat, fish and chicken on Sunday today in the four-hour window from 6 am to 10 am, people and merchants forgot about Mahaveer Jayanti, where there is a complete ban on meat sale. The Mysuru City Corporation (MCC) had notified the ban earlier like they do it every year. But the ban was given a go-by and non-vegetarian stuff was openly sold across the city till the MCC teams began raiding shops for violating the ban.

There was a huge demand for Gudde Mamsa in Kumbarakoppal, Metagalli and Manchegowdanakoppal where the animal is slaughtered and sold on-the-spot and the meat is grouped into small heaps (Gudde). Each kilogram was sold at Rs. 600.

People had to note down their names in a notebook kept there and mention the quantity of meat required. Meat was not sold unless the names were written. Interestingly, the minimum quantity meat that was sold was one kilo and beyond. Those who asked for 500 grams were shooed away. At many places where Gudde Mamsa was sold, people formed groups and violated social distancing norms. Later they bought onions, chillies, coriander and pudina leaves to cook the meat.

Milk outlets too witnessed rapid sale and people stocked up milk, curds and milk products for them to last at least two days.

As they had got information that meat, chicken and fish were sold across the city despite ban due to Mahaveer Jayanti, MCC Abhaya teams along with teams from Animal Husbandry Department raided 14 shops and seized crates of meat and also live animals.

Raids were conducted at shops in V.V. Mohalla, Paduvarahalli, K.G. Koppal, Udayagiri, New Kantharaj Urs Road and Gokulam. Notably, many shops had finished their brisk sale by the time the raiding teams arrived. MCC Veterinarian Dr. Suresh and Health Officer Dr. D.G. Nagaraj said that all the shops that sold meat and fish despite ban have been video-graphed and cases would be booked against owners.

“They will face the law and we will hand over the video evidence to the Police. In all, we have seized seven to eight crates of meat, a couple of goats and sheep and also live animals,” they said.