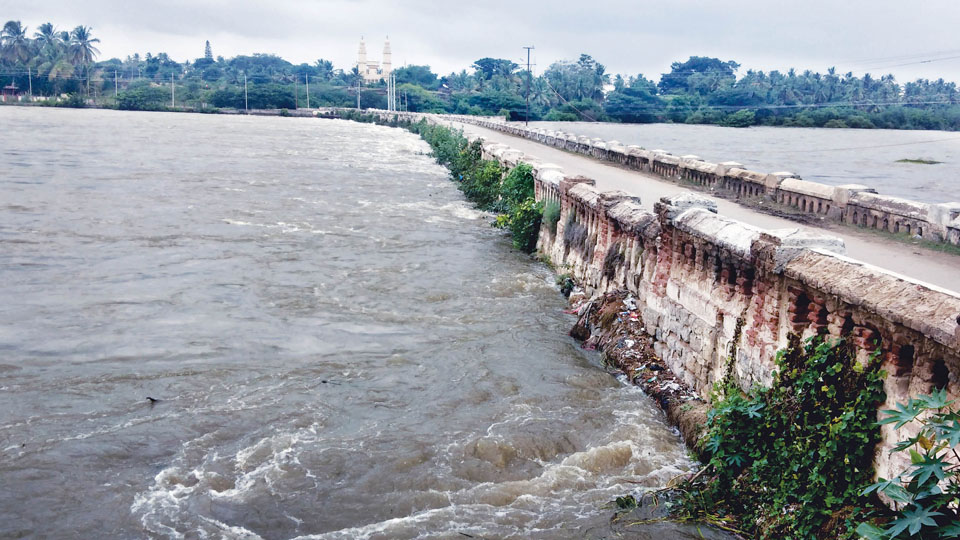 Wellesley Bridge under threat of collapse

Srirangapatna: The historical Wellesley Bridge, built by the British across River Cauvery at Srirangapatna, is under the threat of submersion and collapse. The neglected and dilapidated bridge is withstanding the heavy pressure of water as more than 1 lakh cusecs of water is being released from the Krishna Raja Sagar (KRS) Dam.

The Bridge is likely to submerge as more water is expected to be released following heavy inflow from the Cauvery catchment areas in Kodagu.

Along with the Wellesley Bridge, one more bridge built by the British where trains used to traverse earlier, is also under threat of collapse. Though there is no movement of trains now and the tracks have been removed, local villagers use the side path of the bridge to move and transport goods.

It may be recalled here that the Lushington Bridge, the oldest heritage stone bridge in the erstwhile princely State of Mysore that was constructed in 1818 at Shivanasamudra near Madhyaranga across River Cauvery, was washed away on July 17 last year in the gushing flood-waters of River Cauvery. Nearly 40 feet of the structure was washed away.

As of now, 1,19,000 to 1,25,000 cusecs of water is being released from the KRS Dam. Following the water release, the bird sanctuary at Ranganathittu is flooded and tourist entry has been banned. Boating activity has been cancelled.

Last year, more than 1.40 lakh cusecs of water was released from the KRS and the bird sanctuary was flooded for days and the rising waters have washed away hundreds of nests as most of the trees were half inside water. This year, the Forest Department has marked the areas that are likely to be flooded in case more water is released and have taken certain precautionary measures.

Meanwhile, water release from the KRS has pushed up the number of tourists visiting sites along the Cauvery Basin including Balamuri, Edamuri, Ranganathittu, Srirangapatna, Ganjam and surrounding areas.

Friday being Varamahalakshmi holiday, yesterday Second Saturday and today being Sunday and Bakrid holiday on Monday (tomorrow), many tourists have started pouring in to KRS from Bengaluru and Mandya.

Many temple complexes at Srirangapatna have been inundated and tourists are thronging the KRS to witness water being released from the crest gates. Many were seen taking selfies of the water release.

The historical Wellesley Bridge near Srirangapatna is the only oldest bridge on the Mysuru-Bengaluru highway that still handles vehicular movement. But only cars and motorcycles of local residents are allowed to move on it while the movement of heavy vehicles has been banned. Today, Policemen have been posted to prevent the entry of people over the Bridge. The Bridge was completed in 1804 during the reign of Mummadi Krishnaraja Wadiyar at a cost of Rs.5.5 lakh. It was built after the fall of Tipu Sultan in 1799 during the Fourth Anglo-Mysore War. It is an engineering marvel built on monolithic stone pillars.

Wellesley Bridge served the travelling public between Bengaluru and Mysuru till a new and bigger bridge was built. However, wild growth and lack of maintenance and strong water currents during monsoon and during the water release from the KRS have taken a toll on the historical bridge. Its construction was supervised by Dewan Poornaiah and it was named after the then Governor General Richard Wellesley, considering his contribution in strengthening the British Military Forces.