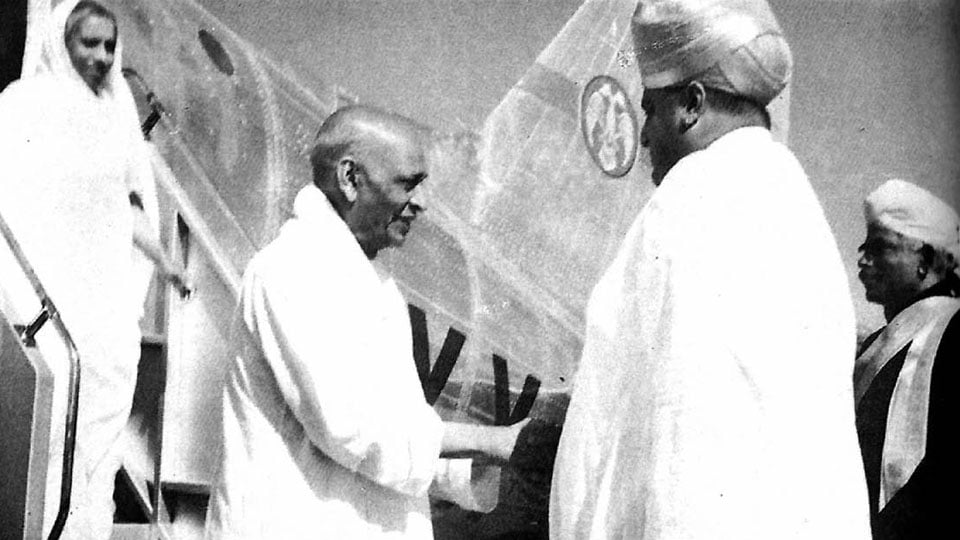 It was indeed fascinating to read the nostalgic account of a nonagenarian Mysorean about the historic events which unfolded almost seven decades ago (SOM dated Oct. 31, 2018 — When Sardar Patel had to be literally carried to Town Hall stage). But Sardar Patel actually visited Mysore on Feb. 24, 1949 and not in 1948 as reported.

Perhaps, what most Mysoreans are not aware is that both Prime Minister Jawaharlal Nehru and Deputy Prime Minister Sardar Patel of Indian Dominion Government, visiting Mysore flying on Mysore Maharaja’s private plane and piloted by his personal pilot! 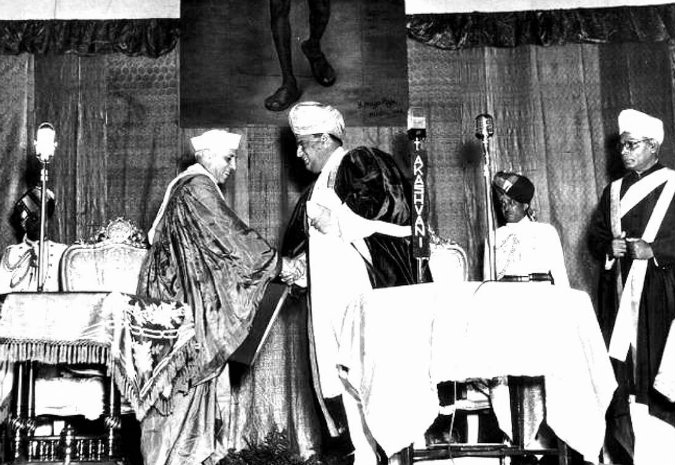 Prime Minister Jawaharlal Nehru with Maharaja Jayachamaraja Wadiyar after receiving the Honorary Degree of Doctor of Science from University of Mysore at a special convocation held on Dec. 28, 1948.

After 1945, number of war surplus Dakota DC-3 planes was available for sale in India.  They were known as “Work Horse of the Air” and Douglas had manufactured some 11,000 during the World War II.

Douglas Aircraft Company had authorised Hindustan Aircraft Company (then part-owned by Mysore) to service and overhaul them. They were converted into 21-seater passenger planes. Soon in 1946, Maharaja of Mysore also acquired one and it was known as Mysore Dakota VT-AXX.

Capt. V. Sundaram then working with Tata Airlines, became Mysore Maharaja’s personal Pilot. After Independence this plane was in great demand by the Indian leaders and Maharaja had left the plane at their disposal most of the times.

Capt. Sundaram’s wife Usha also soon joined her husband as a Co-Pilot-cum-Hostess taking care of VVIPs. Soon the couple was well-known to many stalwarts like Sardar Patel and Pandit Nehru, so much so Capt. Sundaram was increasingly beginning to be known as personal pilot of the Deputy Prime Minister of India !

In 1948, he was elevated as the Director of Civil Aviation, Mysore, when India’s first Flying School was started by the Maharaja’s Government at Jakkur on Dec. 28, 1948.

Pandit Nehru, who inaugurated the Flying School, flew on Mysore Dakota to Mysore and received Honorary Degree of Doctor of Science from University of Mysore at a special convocation held on Dec. 28, 1948.

The Maharaja as Chancellor of the University said, “Pandit Jawaharlal Nehru has not been content with work only in the political field. He is a man of letters and his works have been widely read all over the world and appreciated as much for their literary flavour as for their grave and sublime thoughts. Pandit Nehru’s interest in Science and scientific research is great. His connection with scientific world, the encouragement he has given to scientists and among his numerous duties, the time and attention that he has been devoting to the promotion of scientific and industrial research is testimony both of his interest and his unalloyed devotion of the country in every direction.”

Though by then Sardar Patel had clocked more than 1,00,000 miles on Mysore Dakota, he was yet to visit Mysore ! So he decided to visit Mysore in Feb. 1949. On Feb. 21, 1949, Mysore Dakota took off from Safdarjung Airport to Madras along with Sardar Patel, his daughter Maniben Patel and his Secretary V. Shankar among others. After a few days of official work and meeting with political leaders,  Sardar and his entourage left Madras on Feb. 24 for Mysore.

His Highness the Maharaja received the Deputy Prime Minister at the Mandakalli Aerodrome and introduced him to the prominent officials and non-officials present. After inspecting the guard of honour presented by the Maharaja’s own Infantry, Sardar Vallabhbhai Patel accompanied by the Maharaja drove to Lalitha Mahal Palace. 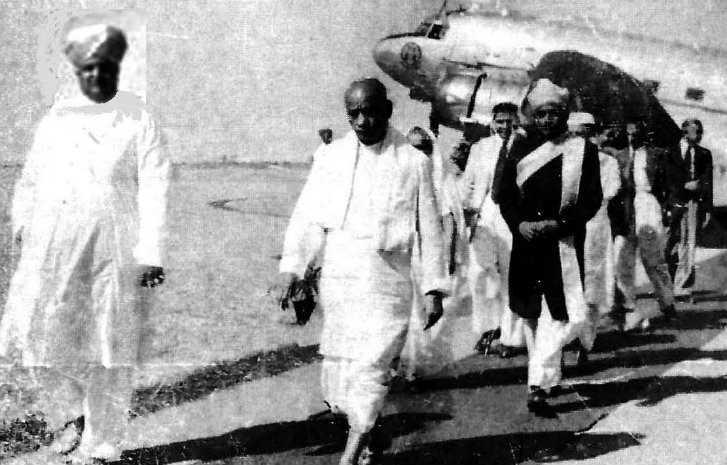 After a few minutes’ rest, Sardar Patel visited Sri Chamarajendra Technical Institute (on Sayyaji Rao Road) and evinced keen interest in the artware displayed there. In the afternoon, the Deputy Prime Minister drove to the Rangacharlu Memorial Town Hall where a Civic Address was presented to him by the Mysore City Municipal Council.

Replying to the Civic Address, Sardar Patel recalled his visit to the State twelve years ago and said that between then and now several changes had taken place in the affairs of the world, of India and of Mysore. He said that the Princes of India had shown rare patriotism and that it was this commendable spirit that made the achievement of liberty possible.

Referring particularly to Mysore, Sardar Patel said that for a long time the people of Mysore wanted Responsible Government and that the Maharaja had now granted self-rule to his people, thereby establishing for himself an abiding place in Indian polity. 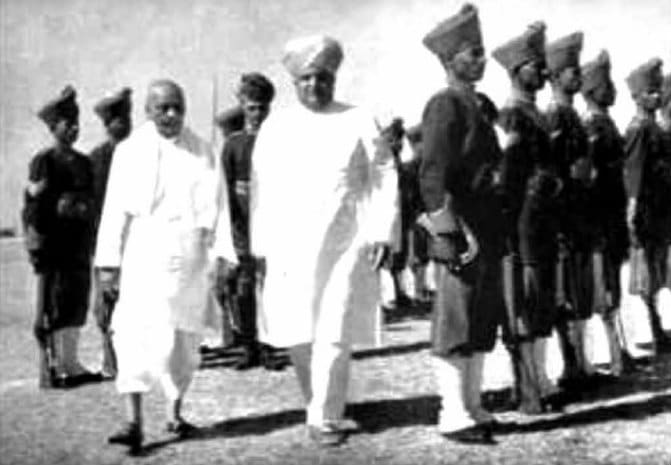 Patel inspecting the guard of honour presented by His Highness the Maharaja’s Own Infantry.

The Deputy Prime Minister then laid the foundation stone of the Gandhi Stupa near the Town Hall donated by Sri Venkatasubbiah Setty.

Later in the evening, His Highness the Maharaja entertained Sardar Vallabhbhai Patel at a Garden Party in the Chamundi Gymkhana. Afterwards, the Deputy Prime Minister drove to the Chamundi Hill and the Brindavan Gardens.

Deputy Prime Minister left for Bangalore on Feb. 25 and had a public meeting hosted by the Bangalore City Municipal Council and the Civil Station Municipal Commission.

Sardar Patel left for Hyderabad on Feb. 26 by the Mysore Dakota from Jakkur Aerodrome. After reaching Hyderabad, Sardar promptly sent a Telegram to Maharaja wherein he particularly thanked the Police arrangement thus:

“I should like to send Your Highness, your Government and the people of Mysore my sincere gratitude for the magnificent reception they gave me and for the generous hospitality and affection extended to me during my short visit to Mysore. It was a real pleasure to me to renew my acquaintance and contact with Your Highness and your State after twelve years and to find that under Your Highness’ aegis the people of Mysore have attained fulfillment of their aspirations and are making such excellent progress on the road to happiness and prosperity. Mysore’s role as the prominent progressive State is being worthily maintained by Your Highness and your Government. I shall be most grateful if Your Highness will kindly convey to all concerned my warm thanks for the excellent arrangements made for my visit. In particular, I should like to say a special word about the Police. Their arrangements left nothing to be desired and the orderly and smooth execution of the programme was largely due to the zeal and keen sense of duty displayed by them. Finally, I should like to assure Your Highness that we are carrying with us most happy recollections of our visit and deeply appreciate the consideration and kindness extended to us by Your Highness personally.” Those were the glorious days when one could have a personal Dakota Plane for under Rs. 50,000 and a personal pilot for Rs. 1,500 and an attractive pilot’s wife doubling as Co-Pilot and Hostess as an added bonus !!

Mandakalli Aerodrome had never had it so good thereafter !

ONE COMMENT ON THIS POST To “When Jawaharlal Nehru and Sardar Patel flew in Maharaja’s private Dakota aircraft !”