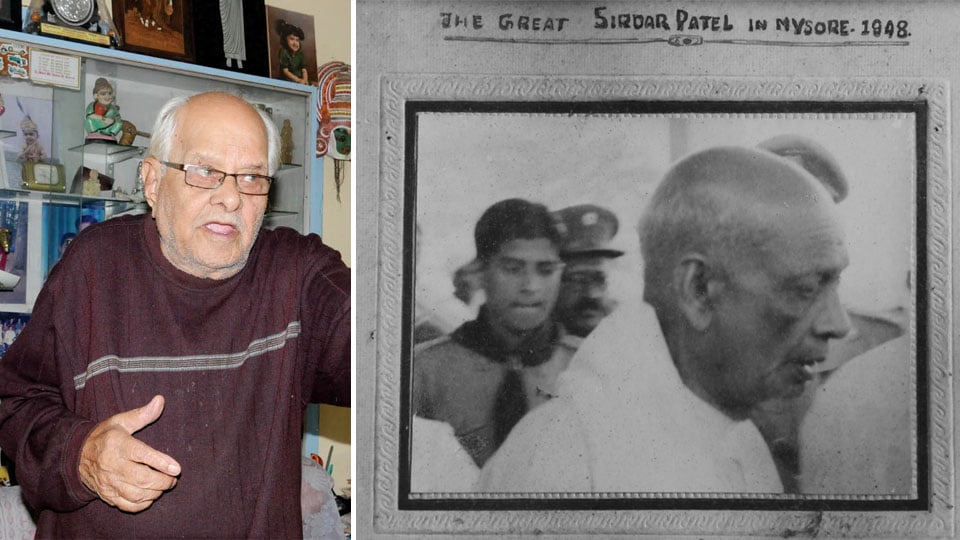 Mysuru: “When Sardar Vallabhbhai Patel visited Mysore in 1948 as India’s Home Minister, he had high fever and myself, along with the State Police Chief had to literally carry him on to the dais that was set up at a height of seven to eight feet at Town Hall.”

These were the words of nonagenarian Prof. K.G. Sathyanarayana, who in 1948 lifted Sardar Patel to the stage along with the then State Top Cop C.M.H. Janajoth Singh. Sathyanarayana was the leader of Rovers Scouts Unit at Maharaja’s College then. A resident of Panchamanthra Road in Kuvempunagar now, 91-year-old Sathyanarayana says that the memory of Sardar Patel’s visit was still fresh in his mind.

“Since today is the 143rd birth anniversary of Sardar Patel and our Prime Minister Narendra Modi is unveiling the world’s tallest statue “Statue of Unity” downstream of the Narmada Dam, I thought that my experience with Sardar Patel in Mysore might interest your readers,” Prof. Sathyanarayana told Star of Mysore this morning.

Proudly displaying his photo along with Sardar Patel and C.M.H. Janajoth Singh, he said that in 1948 (he does not remember the date) when Patel came to Mysore, the atmosphere was charged up at Town Hall  where he was to address the students and a large audience. It was a vast place and the present Makkaji Chowk was not there then.

“I was heading the 250-member Rover Scouts Unit at the College and I was the in-charge of security along with the local Police. A giant stage was set up at the Town Hall and it was at a height of seven to eight feet.  As Sardar Patel came to the venue, I was told that Patel was suffering from fever and had to be carried to the stage for him to deliver the speech,” he narrated. 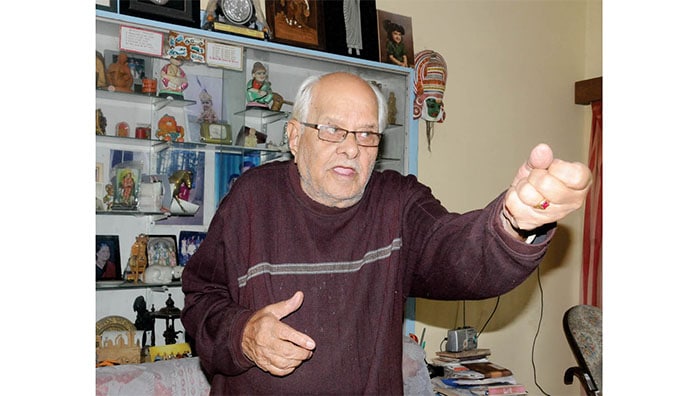 The 91-year young Prof. K.G. Sathyanarayana recounting his experience with Star of Mysore reporter at his residence in Kuvempunagar this morning.

“Without shirking my responsibilities, Janajoth Singh and myself  literally carried Sardar Patel slowly through the steps and made him sit on a chair on the dais from where he delivered an awe-inspiring speech for 45 minutes,” he said. “Only Janajoth Singh, myself and Sardar Patel were on the dais and all the rest were seated among audience,” he said and  it was a moment of pride to carry the national leader.

Profile: Sathyanarayana, son of  Nanjamma and K.R. Gopalaiah, was born on 9.5.1928 at Konanur village in Arakalagud Taluk, Hassan. He completed his primary education at Konanur and studied his high school at Banumaiah High School and intermediate schooling at First Grade College, Mysore. Later, he joined Maharaja’s College for his BA and secured Bachelor of Teaching degree at Mysore University.

Sathyanarayana completed his MA History at Nagpur University and secured M.Ed degree at Karnatak University, Dharwad. He went on to secure his Advance PG degree in 1966 at Bristol University, United Kingdom.

He taught at various institutions, served as HM and Principal before retiring as the Director of Department of State Educational Research and Training (DSERT) in 1983. [DSERT is now Department of Public Instructions].

Recounting Jawaharlal Nehru’s visit to Mysore in 1948, Prof. Sathyanarayana said, “When the then PM Nehru came to Mysuru along with the daughter of an Ambassador, a large number of people had gathered in city. Due to the rush, the lady along with Nehru went missing for some time as the crowd, shouting Nehru’s name, rushed forward to meet him. Even Nehru was searching for her. I was near Nehru and I patted on his back and told him that he had a great fan following in Mysore. To this, Nehru responded with a smile and a nod,” he narrated.

Later, the Police were able to locate the Ambassador’s daughter amidst the crowd and she was brought to Nehru,” Sathyanarayana added.