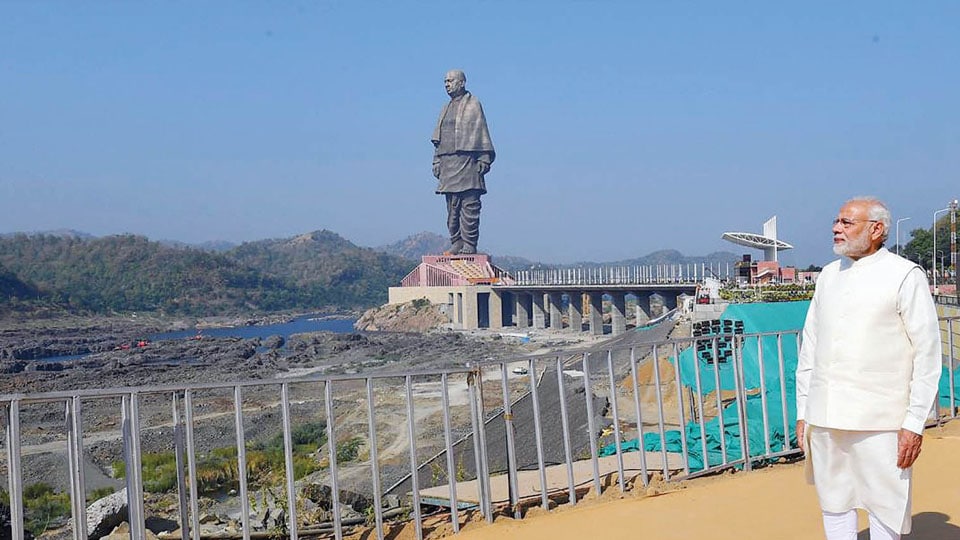 Air Force planes showered flowers on the statue in a grand inaugural event on the banks of the Narmada River in Gujarat as Modi dedicated it to the nation. Modi poured soil and Narmada water into a ‘Kalash’ to mark the birth anniversary of Sardar Patel. He also did a virtual “Abhishek” of the statue with the help of a lever.

As part of 143rd birth anniversary of Sardar Patel, people across the country including Mysuru participated in the ‘Run for Unity’ this morning.

At 182 metres, the Sardar Patel statue is twice the height of the Statue of Liberty in New York City and four times that of Christ the Redeemer in Rio de Janeiro. It has been built on a rocky island on the Narmada river, 3.5-km South of the Sardar Sarovar Dam at Kevadia in Narmada district of Gujarat.

On Oct. 29, 2013, Modi, who was then the Gujarat Chief Minister, along with then Prime Minister Dr. Manmohan Singh, shared a rare platform in Ahmedabad on the inauguration of a museum built by the Sardar Vallabhbhai Patel Memorial Society. Modi and Singh took digs at each other, keen to appropriate Sardar Patel’s legacy for their respective parties.

Two days later (Oct. 31), Modi laid the foundation stone for Statue of Unity. Patel belonged to the Congress, but is a hero to the BJP, which contrasts his iron man qualities with what it calls the weaknesses of Jawaharlal Nehru, the first Prime Minister of India. Modi has on several occasions said Patel was ignored by the Congress and not allowed to become India’s first Prime Minister.

Dedicating the statue to the nation, PM Modi said, “Statue of Unity is an answer to all those who question the existence of India. The height of the statue is to remind the youth that the future of the country will be as huge as this. It is also symbolic of our engineering and technology affordability.”

Crediting Sardar Vallabhbhai Patel for “uniting India,” PM Modi said, “Had Sardar Patel not united the country, we would need visas to see lions or pay homage at Somanath or view the Charminar in Hyderabad. Patel converted India’s diversity into its biggest strength. The country is today following the path shown by Patel and is moving towards becoming the world’s greatest economic and strategic power.”

The project took 42 months to complete. Apart from the statue itself, there are five other related sites that are constructed along with the world’s tallest statue. These include the walkway, the ticket counter, the food court, the four-lane approach highway, and the ‘Shrestha Bharat Bhavan’- a 52-room three-star lodging facility for the visitors coming to see the monument.

Launching an attack on those opposing the Statue of Unity, Modi says he is “amazed” that protesters are giving it a “political colour.” “The statue is a symbol of country’s respect to this great man. Praising great icons like Patel has also brought us criticism. It seems like we have committed a big crime.” 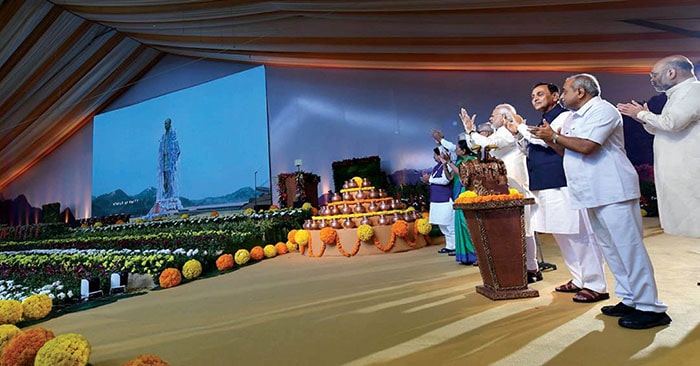 What is Statue of Unity?

The statue shows Patel wearing a traditional dhoti and shawl, towering over the Narmada River. The statue has been designed by Padma Bhushan-winning sculptor Ram V. Sutar and has been built by Larsen and Toubro (that has a branch in Mysuru too) and the Sardar Sarovar Narmada Nigam Ltd.

The foundation stone for the project was laid in 2013. The Rs. 2,989 crore project took 42 months, and round-the-clock work by 4,076 labourers and 250 engineers to complete. They include around 800 locals and about 200 workers from China who worked in batches since September 2017.

Iron was collected from all over the country for the statue of Sardar Patel, also known as the Iron Man of India. 77,000 tonnes concrete was used and 5,700 tonnes steel for was used to build the framework. 1,850 tonnes of bronze sheets were also used.

Construction began with the feet in January 2016, moving on next to the dhoti, the knees and then the shawl flung over the statue’s shoulders, reaching all the way down. All these specifications, including showing Patel’s legs clad in a dhoti and his feet in sandals, mean the statue is thinner at the base than the top.

This is unlike other tall statues, which have a wider base for stability. Besides this, the designers and engineers had to account for the wind factor, given the location and height of the Patel statue, and to factor in the possibility of earthquakes. It can sustain wind velocity of 220 kilometres per hour and earthquakes measuring up to 6.5 on the Richter Scale.

The statue will have a viewing gallery at a height of 153 metres and can accommodate up to 200 visitors at a time. Facilities for the public ranges from Selfie Points created in a 5 km radius around the statue, to a museum at the statue’s base that has artefacts and documents from the life of Sardar Patel, including from his personal life.

The museum also has an 8-foot prototype of the head of the Statue of Unity. For accommodation, 3-star hotel with food service, guest amenities, and conference facilities is coming up. Two tent cities, comprising 50 and 200 tents, have also been set up on Narmada banks.

Making of Statue of Unity: The timeline

Oct 2014: L&T awarded contract. Construction of the base begins by reducing Sadhu Bet hillock to size

Jan 2016: Construction of RCC cores begins, beginning with feet of the statue

Oct 2016: Construction of RCC cores completed up to 25 metres of the statue, just above the ankles

July 2018: RCC cores completed up to 157 metres, where there will be a viewing gallery