Home » News » When you fall in Love with a city 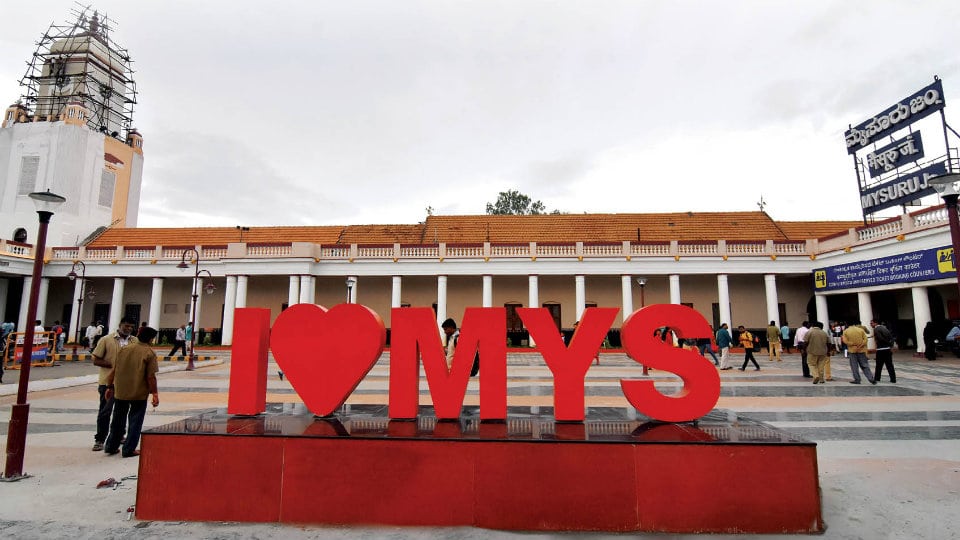 When you fall in Love with a city

Mysuru: Everything about Mysuru excites you at first as you explore it and learn the hotspots, the road to avoid, the best places and localities to eat and socialise. As you stay in this city, you will memorise the streets, the store fronts, favourite handicraft, coffee shops and important landmarks.

In Mysuru, one such landmark is the City Railway Station with its towering structure. The Station premises has now turned a selfie spot, thanks to the “I Love MYS” structure set up there. The red attraction has been intelligently carved ‘MYS’ similar to the Mysuru Station Railway acronym that is also ‘MYS’.

Railway sources told Star of Mysore that the “I Love MYS” structure is a ‘Self Glow LED’ and made of red acrylic material. The structure glows in the night and has been placed prominently in the circulating area of the Railway Station.

Along with this selfie spot, the Railway Station is being beautified as part of the redevelopment project. The towering Clock Tower of the Station is being refurbished and supporting wooden scaffoldings have been erected to paint the structure. Railway officials say that the facilities are being improved to match the facilities and beautification of an airport.

All these works are being undertaken at the City Railway Station as part of the Redevelopment Project initiated at a cost of Rs. 15 crore. The project is being undertaken without marring the heritage of the Station. The place is a heritage marvel and its magnificently lined Corinthian columns are a landmark for Mysuru city.

Completed in 1940, the building was constructed during the tenure of last Chief Engineer of the erstwhile Mysore State Railway. It was designed by D.V. Narasimha Rao, Founder-Member of National Institute of Engineering (NIE).

As part of the passenger amenities, there are two escalators (ascending and descending on Platform 1 and 6. There are two passenger lifts on island Platforms 2/3 and platforms 4/5. The subway connects all platforms on Chamarajanagar end. There is a 24-hour buggy service available free of cost for infirm and elderly passengers.

The parking area now has a pay-and-use toilets facility, full length platform shelters have been set up on all platforms, and aesthetic improvements have been undertaken which includes paintings. The circulating area has been expanded and the earlier Railway offices have been relocated and the Station’s facade has been improved along with improvements to passenger waiting halls and room. A reserved lounge has been constructed for First AC passengers and the Parcel Office has been shifted. In addition, the steps have been taken to refurbish illumination.