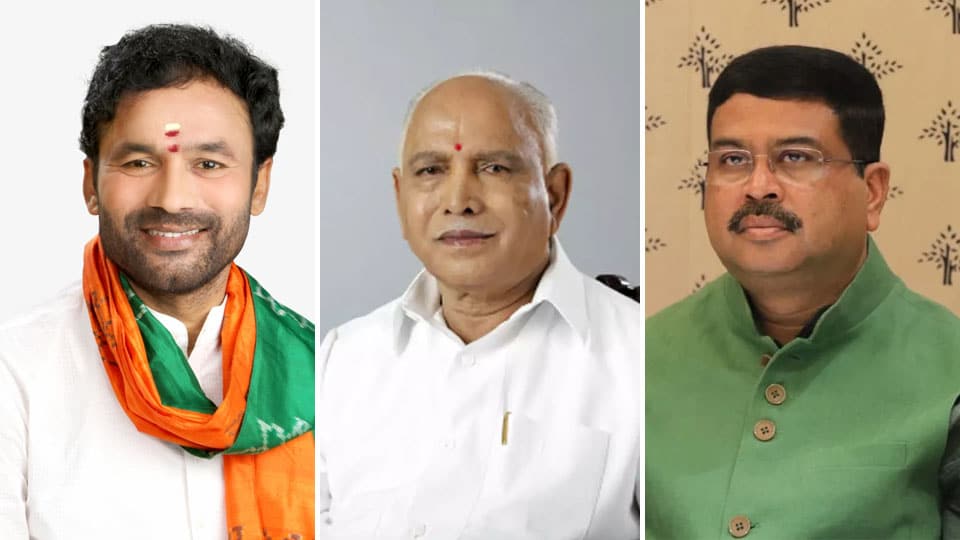 Who will succeed B.S. Yediyurappa ?

Bengaluru: An emergency BJP Legislature Party (BJP-LP) meeting has been called in Bengaluru today at 7 pm to select the next Chief Minister to succeed B.S. Yediyurappa, who resigned teary-eyed yesterday. The new CM will face the challenge of steering the Government for the next 21 months, until the 2023 Assembly elections.

All BJP MLAs have been asked to be present at the Capitol Hotel near Raj Bhavan where Union Minister of Education, Skill Development and Entrepreneurship Dharmendra Pradhan and Minister of Tourism, Culture and Development of North East G. Kishan Reddy will act as Central Observers who will hear the MLAs on the new leader.

The communication of the meeting to the MLAs has been given through Karnataka BJP Media Convener Karunakara Khasale by Party Chief Spokesperson Captain Ganesh Karnik.

The BJP High Command has entrusted Pradhan and Reddy to ensure smooth transition of power. Along with them, the party in-charge of Karnataka Arun Singh (also party General Secretary) and his deputy D.K. Aruna will be present. While the party in-charges are scheduled to arrive from New Delhi at 2 pm, the Observers will arrive at 4 pm.

MLAs will not be allowed to meet the Observers and the party will follow the Assam and Uttarakhand models to select the leader. In Assam and Uttarakhand, the party changed the CM aiming to take on the next elections on the basis of collective leadership rather than the face of the new Chief Minister. Whatever opinions expressed at the BJP-LP meeting this evening will be collective and not individual, sources told Star of Mysore.

Hours before today’s BJP-LP meeting, a Central BJP Parliamentary Board is meeting at Prime Minister Narendra Modi’s residence to select Yediyurappa’s successor. BJP Chief J.P. Nadda and Union Home Minister Amit Shah are part of the meeting. There is a high likelihood of Dharmendra Pradhan and Kishan Reddy carrying the name of the next CM in a sealed cover before they arrive in Bengaluru.

Though it is not confirmed, party leaders have indicated that the leadership will consider Yediyurappa’s preferences while choosing his successor. The Observers will have to assess the tone and mood before finalising a successor.

“The High Command has to see the tone and mood of the legislators. They will have to weigh all the factors and decisions will be taken by the Central leadership in accordance with the outcome of the Legislature Party meeting,” a BJP leader said. If at all the new leader is elected or announced this evening, the swearing-in ceremony of the new CM will be held on Thursday (July 29) on the lawns of Raj Bhavan.