Home » News » Will lights on Ring Road put an end to crimes? 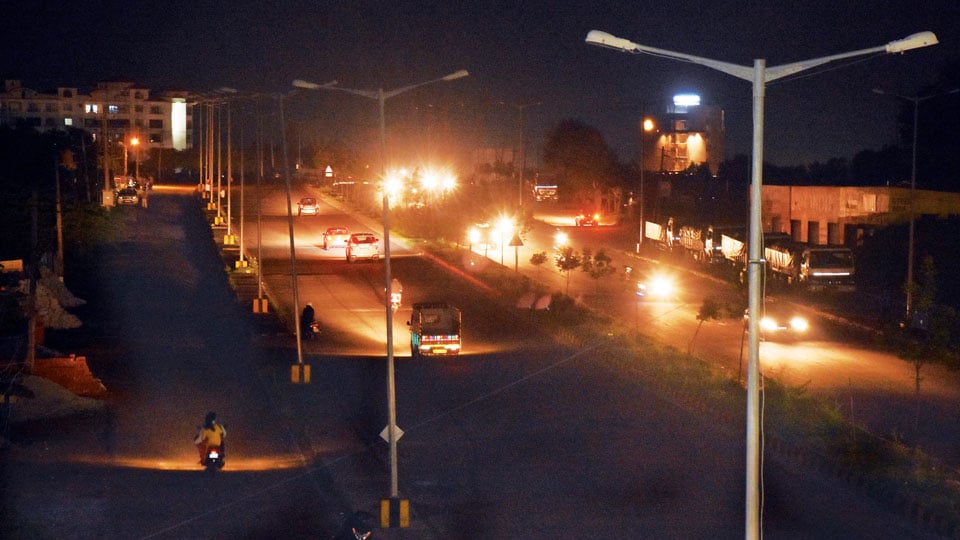 Will lights on Ring Road put an end to crimes?

Two miscreants waylay floral decorator; flee with scooter at 1.30 am on Nov. 27

Mysuru: Incidents of miscreants waylaying motorists and robbing them of their valuables, money extortion and other illegal activities are increasing by the day on the Outer Ring Road and victims have said that such incidents were taking place due to the absence of streetlights.

As the entire road is covered in darkness, it is an easy getaway for criminals who operate in gangs. They vanish under the cover of darkness after the crime as the Road has many entry and exit points that lead to smaller lanes and bylanes. Darkness gives a perfect camouflage.

With the project to switch on the streetlights on the Ring Road becoming a reality finally tomorrow, people are hoping that at least there will be a sense of fear in the minds of anti-social elements who can easily be spotted.

The latest crime that occurred on this stretch is on Nov. 27 where two miscreants waylaid a floral decorator and his friend. The robbers threatened them with a knife and made away with their scooter.

19-year-old C.T. Jayakeerthi, a resident of Basaveshwaranagar, who had the task of decorating a hall at Sa.Ra. Convention Hall took his friend Achappanna on his scooter (KA-44-W-8949) to get more flowers.

When they were proceeding towards Bogadi Circle at about 1.30 am, two persons waylaid them near Acharya Kalyana Mantapa, threatened them with a knife and snatched away Rs. 500. They eventually fled with their scooter. A case has been registered at the Kuvempunagar Police Station.

This apart, in the last 11 months, 3 dacoity cases, 3 chain snatching cases and 5 mobile phone snatching cases have taken place on the Ring Road during night. Also, incidents of miscreants clicking intimate photos of couples and blackmailing them have also taken place under the cover of darkness.