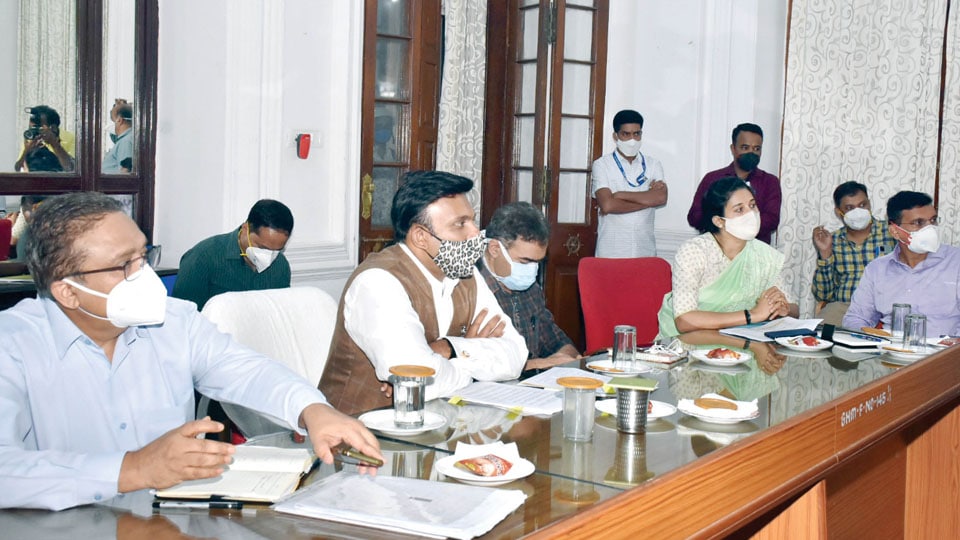 Will make Health Department a model one: Minister Dr. Sudhakar

Speaking to presspersons  at the Government Guest House here yesterday, hours after he was given additional charge of Health and Family Welfare Department by the Chief Minister, Dr. Sudhakar said that there were similarities in the functioning of the two Departments.

Pointing out that many States have a single Minister for both the Departments, he said that Yediyurappa has followed the same policy by entrusting him (Sudhakar) the Health and Family Welfare portfolio, in addition to Medical Education Department which he is already holding.

Asserting that there will be no disgruntlement in respect of B. Sriramulu being relieved of Health and Family Welfare portfolio, he reiterated that both the Departments were technically the same. Maintaining that Yediyurappa had spoken to Sriramulu before relieving him of Health portfolio, Dr. Sudhakar said his immediate task was to make Health Department a model one in the country.

He said the CM has given the Medical Education and Health portfolios to him (Sudhakar) with the sole purpose of providing better health care and services to the people. Arguing that Sriramulu is not disappointed over being stripped of Health portfolio, he said Sriramulu has been given another important portfolio of Social Welfare Department.

Noting that he has directed for increasing the number of beds in Government Hospitals, Dr. Sudhakar said he has asked the health authorities to bring down Covid-19 case fatality rate in the State.

Continuing, the Minister said that Mysuru has been recording the biggest fatality rate after Bengaluru, which is a matter of serious concern. Pointing out that the bed capacity of Government Hospitals can be increased by 600 to 800 beds, he said the hospital authorities must ensure that no patient should be turned away for want of bed.

Asking the authorities to increase RT-PCR tests for early  detection of COVID-19 cases, he also stressed on the need for increasing the number of Labs. Instructing the officials to take serious note of rising COVID-19 deaths, he also emphasised on the importance of faster issuance of test reports.

Directing the Nodal Officers to ensure that there is no shortage of necessary drugs, he underlined the necessity of keeping a watch on those who are under home isolation or quarantine.

More beds in a week

Stating that the Government has provided 590 beds for COVID-19 patients, he said an additional 178 beds are at the disposal of Government Medical College, 250 at the District Hospital, 260 at Trauma Centre and 50 at Taluk Centres, totalling 1,328 beds. The Government will add 428 more beds in a week, he added.

READ ALSO  How does Mysuru look during a lockdown? Take a look

Mask is a strong weapon to prevent COVID spread

Asserting that wearing of quality  face mask is the strongest weapon so far to prevent the spread of the deadly Coronavirus, Dr. Sudhakar said it is equally important to follow all other preventive and safety measures such as maintenance of physical distancing and use of hand sanitisers.

Appealing the people to get themselves voluntarily tested as soon as they show COVID-19 symptoms such as fever, cold, cough and difficulty in breathing, he said that early detection will largely help in combating the disease.

Referring to Dasara, the Minister said the Government has decided to celebrate Dasara in a simple manner this year due to COVID-19. Stating that one should take note of Kerala example, where Corona cases grew instantly following  large-scale Onam celebrations, Dr. Sudhakar expressed confidence that the measures taken for bringing down the cases in Mysuru district will yield results in a fortnight. Appealing the people to extend their co-operation for the conduct of a safe Dasara, Dr. Sudhakar said it is the responsibility of everyone of us to ensure that the festival does not lead to a spurt of the contagion.

Earlier, the Minister held separate meetings with Government Officials and Private Hospital heads at the Government Guest House in Nazarbad on the additional measures that need to be taken for arresting the spread of the virus and bringing down COVID fatality rate.