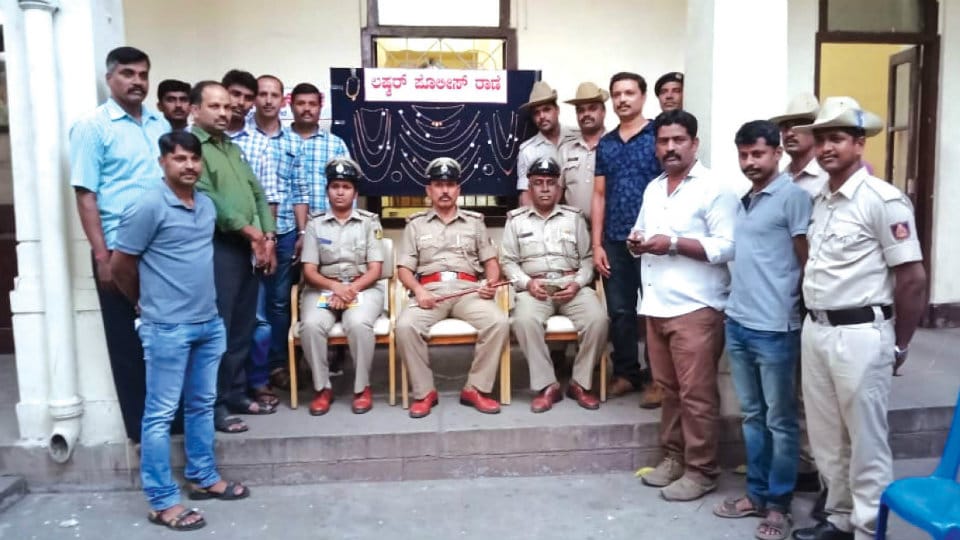 Robbery after lacing juice with sedatives

Mysuru: Lashkar Police, on Feb.23, have arrested a woman, on charges of befriending women travelling in buses and robbing them of their gold ornaments after making them drink juice mixed with sedatives and rendering the victims unconscious.

The accused is 28-year-old Suvarna, wife of Manikanta and a resident of Ganesh Nagar in N.R. Mohalla in city.

On Jan.28, Suvarna, who was travelling in a KSRTC bus from Bengaluru to Mysuru, befriended a 71-year-old woman, a resident of Roopa Nagar, who was seated next to her. When the bus reached Srirangapatna, Suvarna is said to have given a juice packet, which was mixed with sleeping tablets to the elderly woman, who became unconscious after drinking it. After reaching Mysuru, Suvarna herself took the elderly woman with her and dropped the elderly lady to her house.

When the elderly woman regained conscious, she found her gold chain (Mangalasutra) and a Havala chain missing, following which the elderly lady had lodged a complaint at Lashkar Police Station in this regard.

Lashkar Police, who had registered a case, began their investigation and based on the information, conducted an operation at the KSRTC Bus Stand on Feb.23 and arrested the accused.

During interrogation, the accused is said to have confessed that she targeted elderly woman, travelling alone in buses, befriend them and later used to give them juice which was mixed with sleeping tablets. When the elderly woman dozed off, she used to cut the gold chains using cutting pliers and rob them, Suvarna told the Police and added that she had pledged the gold ornaments at Manapuram Finance, Muthoot Finance and Fed Bank.