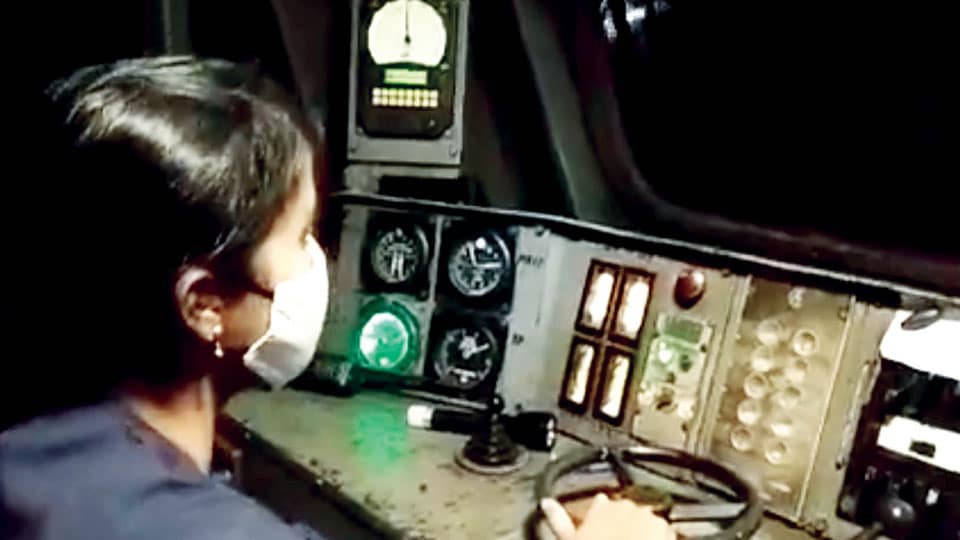 They cover 120 km in one-and-a-half hours; clock an average speed of 80 kmph

Bengaluru: An Oxygen Express train carrying 120 metric tonnes of Liquid Medical Oxygen (LMO) from Jharkhand and piloted by an ”All Female Crew” from Jolarpettai in neighbouring Tamil Nadu arrived in Bengaluru yesterday. The pilots covered the last 120 km stretch in one-and-a-half hours, clocking an average speed of 80 kmph.

“The 7th Oxygen Express to Karnataka has arrived in Bengaluru from Tatanagar (Jamshedpur). This Oxygen Express train piloted by an all-female crew will ensure continued supply of oxygen for COVID-19 patients in the State,” Railway Minister Piyush Goyal tweeted and has posted the video from his Twitter handle. The video shows the crew driving the train in the night.

“We started our journey from Jolarpettai and drove till Whitefield in Bengaluru. It was altogether a different experience as we got all clear signals on this stretch and we could achieve such a good speed. It was raining and it was a nice experience,” Assistant Loco Pilot Aparna said.

Loco Pilot Sireesha Gajini also said the experience was different as they did not need to wait anywhere. When they drive other good trains, halting at stations and different spots is quite common. But due to perfect coordination, Oxygen Express trains are reaching the destinations in less time. “The railways always encouraged women participation and this is one of such opportunities for us. We are proud of doing our bit,” she said.

It may be mentioned here that on May 19, Assistant Loco Pilot Neelam Kumari was part of the Loco Pilot team that had brought one more Oxygen Express via Jharkhand-Jolarpettai-Bengaluru. The other team members were Loco Pilot Dhirendra Kumar and V.H. Wali, Chief Loco Inspector.

Reacting on the feat, Neelam Kumari said that she was extremely satisfied and felt proud that she could be of some help during this COVID crisis.

“I really felt like an ambulance driver. The entire path was cleared for us and made signal-free making it easy to bring the train to safety,” she said.