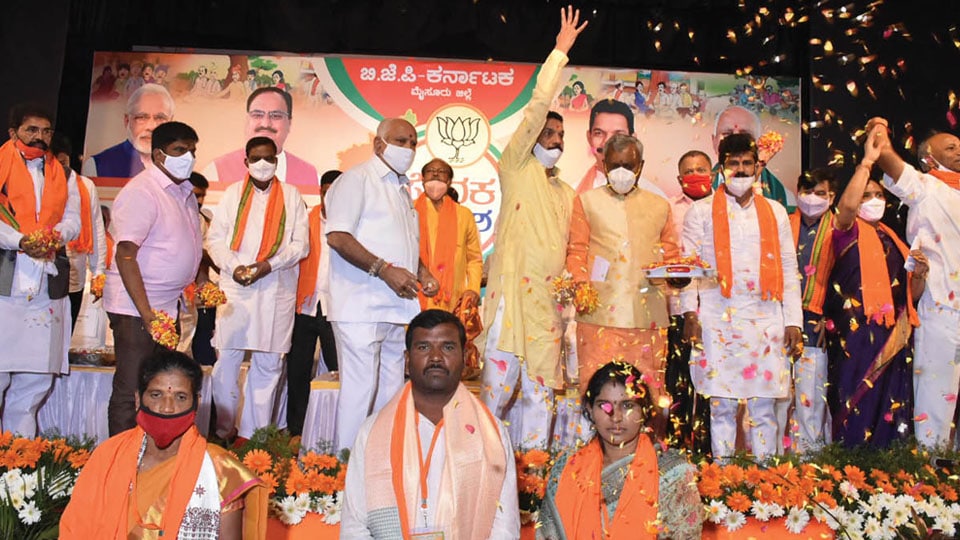 Mysore/Mysuru: Chief Minister B.S. Yediyurappa today called upon newly-elected Gram Panchayat (GP) members to work hard with full dedication for the development of villages which would in turn help the party win the 2023 Assembly polls.

“I have assured national leaders that BJP will win 140 to 150 seats in the coming Assembly elections. That will be possible only if you work hard in your villages,” the CM said at the inauguration of ‘Jan Sevak Samavesha’ held at Kalamandira here today.

Yediyurappa said that there was great responsibility on them to work to the expectation of voters and to be the changer of rural areas through hard work. Getting elected to Gram Panchayat had been a God sent opportunity especially for women members to show their concern by developing villages, he added. “You will become President or Vice-President, but never forget your responsibility. I started by political career from the grassroots level and became the CM after touring the State extensively. Success is guaranteed for those who work hard with dedication,” he said.

Indirectly attacking former CM Siddharamaiah, the CM said that he did not want to comment or react about the leader, whose biggest achievement has been eating ‘beef.’ None can stop BJP from coming to power in 2023, if everyone works hard in their respective constituencies, he added.

“I appreciate State BJP President Nalin Kumar Kateel for organising such conventions in all district headquarters to explain them the importance of rural development,” Yediyurappa said.