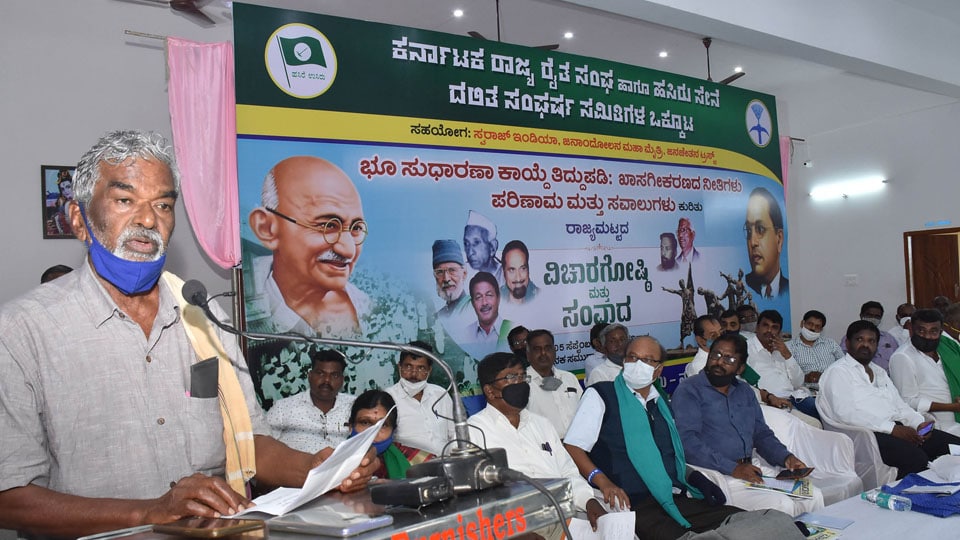 Mysore/Mysuru: Noted Kannada littérateur Devanuru Mahadev alleged that at a time when people are unable to raise voice in the wake of COVID-19 situation, the Government was trying to allow private and corporate companies control the country. He was speaking at a state-level workshop on ‘Amendment to Reforms Act: Privatisation policies, effects and challenges’ organised jointly by Karnataka Rajya Raita Sangha, Hasiru Sene, Dalit Sangarsh Samiti, Swaraj India, Janandolana Mahamaitri, Janachetana Trust at Kanaka Community Hall at Siddartha Nagar in city yesterday.

Mahadev said in 2015, the BJP-led NDA Government passed an ordinance to the progressive Land Acquisition Act passed by the Congress-led UPA Government in 2013. This defeated the very purpose of land reforms. The 1894 British Government Act had given a provision for land owners to raise objection but that power was snatched away by the BJP Government through ordinance.

Protests against the ordinance were totally ignored by the government. The 1974 Land Acquisition Act enacted by the D. Devaraja Urs Government was totally diluted. People must raise voice against such dangerous amendments which would pose a big problem to the country agriculture, he opined.

He called upon people to launch agitation against such anti-people policies. Protest by individuals or organisations would not be useful. All like-minded people, associations and organisations must fight united, he said.

Karnataka Rajya Raitha Sangha and Hasiru Sene President Badagalapura Nagendra said the voice of farmers and workers was snubbed. Properties of Government are being privatised due to commercialisation.