Home » News » Wrestlers fight it out at Dasara contest 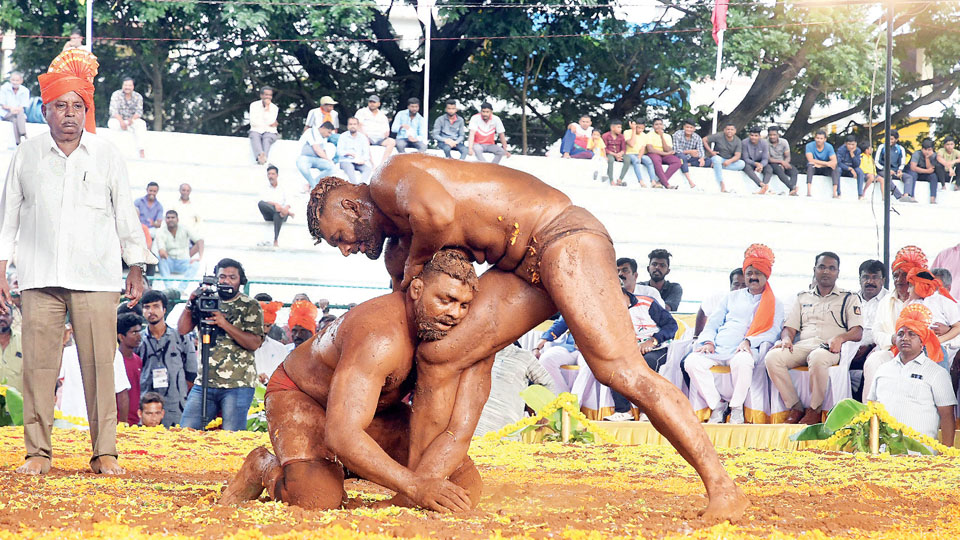 Wrestlers fight it out at Dasara contest

Continuing, the Minister said that Dasara is a festival for everyone in the State and added that Mysuru Dasara has always given encouragement and strength to the wrestlers.

District Minister S.T. Somashekar, who also spoke, said that 30 to 40 wrestlers from various States are taking part in this year’s Dasara Wrestling events which is a special one. The Minister appreciated the Dasara Wrestling Sub-Committee for organising the events perfectly.

Earlier, the sports torch was brought to the wrestling arena by senior wrestler Pailwan KSRTC Kempegowda, who offered puja to the mud (matti).

Siddeshwar, who was in the attacking mood from the beginning of the bout, did not follow the rules, resulting in the audience getting angry on him.

As one of the senior wrestlers shouted on Siddeshwar to wrestle in an orderly manner, Siddeshwar got angry and tried to pick up a fight with the audience.

MLA L. Nagendra, a former wrestler, who was the referee, intervened and brought the situation under control. Finally, the bout ended in a draw after one hour of wrestling.