Home » News » ‘Govt. to develop Mysuru as an Industrial Hub’ 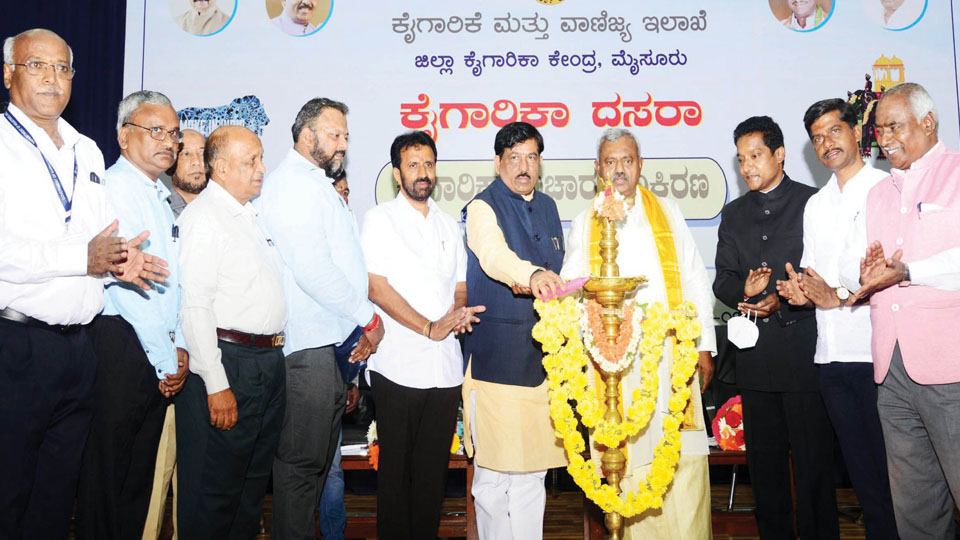 ‘Govt. to develop Mysuru as an Industrial Hub’

Mysore/Mysuru: Minister for Large and Medium Scale Industries Murugesh Nirani inaugurated Kaigarika Dasara-2022 at Vijnana Bhavan in Manasagangothri yesterday. Speaking on the occasion, he said that the late Maharaja of Mysore Nalwadi Krishnaraja Wadiyar and Engineer-Statesman Sir M. Visvesvaraya introduced industries to the entire world at a time when nobody had any idea of industry.

“By establishing about 150 industries, Nalwadi was in the list of top 10 richest persons of the world. If Mysuru is at the forefront in the fields of education and industry today, it is because of Nalwadi,” said Nirani.

Crediting PM Narendra Modi for the country’s self-sufficiency in food production, Minister Nirani said that India is on the verge of attaining Atma Nirbharata in food production. “Modi wants India to decrease imports and increase exports,” he noted.

Bengaluru is already witnessed big industrial growth and the State Government is now focusing on second and third tier cities for setting up of more industries and Mysuru is one of the priority places, said Nirani.

“A Global Investors Meet is being organised  from Nov. 2 to 4 at Bengaluru. We have visited Davos, America and Japan to meet world’s leading industrialists and invited them to invest in Karnataka and many have shown interest. In the proposed Bengaluru meet, we are expecting an investment of Rs. 5 lakh crore. About ten lakh jobs will be created,” he added.

Exhorting the youths to focus on self-employment, the Minister pointed out that 40 to 50 percent subsidy is being given to the self-employed people. For those who want to manufacture Ethanol from Sugarcane, it has been decided to give loan up to 95%. “There will be a subsidy of 6 percent for 5 years. Ethanol can be manufactured with zero investment,” said the Minister and concluded by saying that Nalwadi Krishnaraja Wadiyar is the role model for all industrialists.