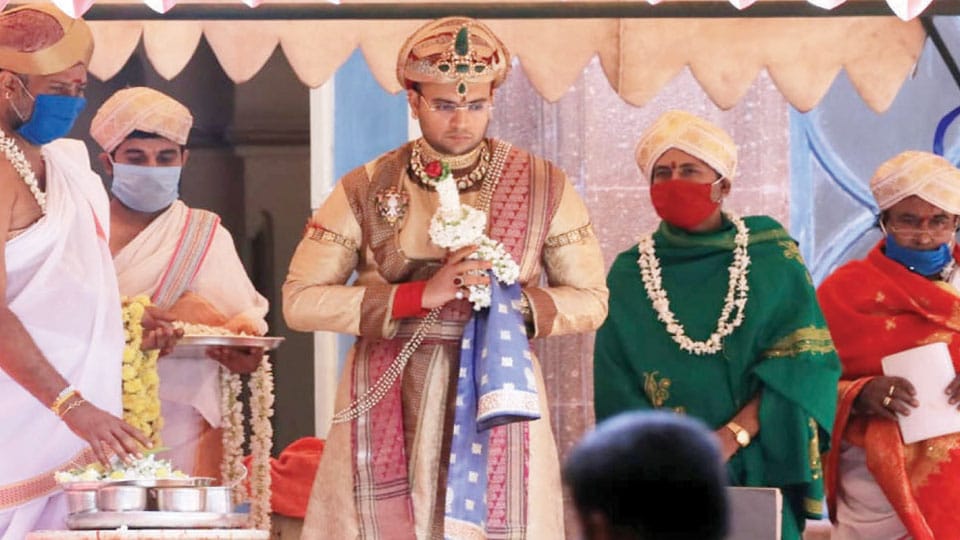 Mysore/Mysuru: Marking Ayudha Puja, titular head of royal family, Yaduveer Krishnadatta Chamaraja Wadiyar, performed the customary pujas and homas, including Chandi Homa with Poornahuti, to the armoury of the Palace, including Pattada Katti, in the Palace premises on Sunday.

On Ayudha Puja day on Sunday, Pattada Aane (State elephant), Pattada Hasu (State Cows), Pattada Kudure (State Horses)were brought to the inner premises of the Palace as early as 6 am, following which they were taken to Kodi Someshwara Temple along with other Dasara elephants.

Later, pujas were performed at Kodi Someshwara and Kodi Bhyravaswamy Temples and Chandi Homa Poornahuti took place at 9.15 am. Thereafter, Pattada elephant, cow and horse were brought to Savari Thotti at 10.15 am, following which Yaduveer performed puja to all the armoury and Pattada Katti in the auspicious time between 10.50 am and 11.25 am.

Subsequently, Yaduveer performed puja to all the vehicles used by Srikantadatta Narasimharaja Wadiyar and showerd petals on them. The rituals were watched by Pramoda Devi Wadiyar, Trishikha Kumari Wadiyar and Aadyaveer Wadiyar, through the window on the top floor of the Palace.

The Khas Darbar, also known as Private Darbar, ended with Simha Visarjane later in the evening.

Trishikha Kumari Wadiyar, wife of Yaduveer along with the couple’s son Adyaveer, watched the entire ‘Vijaya Yatre’ procession, standing from the Palace Gallery, even as Yaduveer marched in the Yatre from the starting point of Aane Bagilu to Sri Bhuvaneshwari Temple at the Northern side of the Palace.