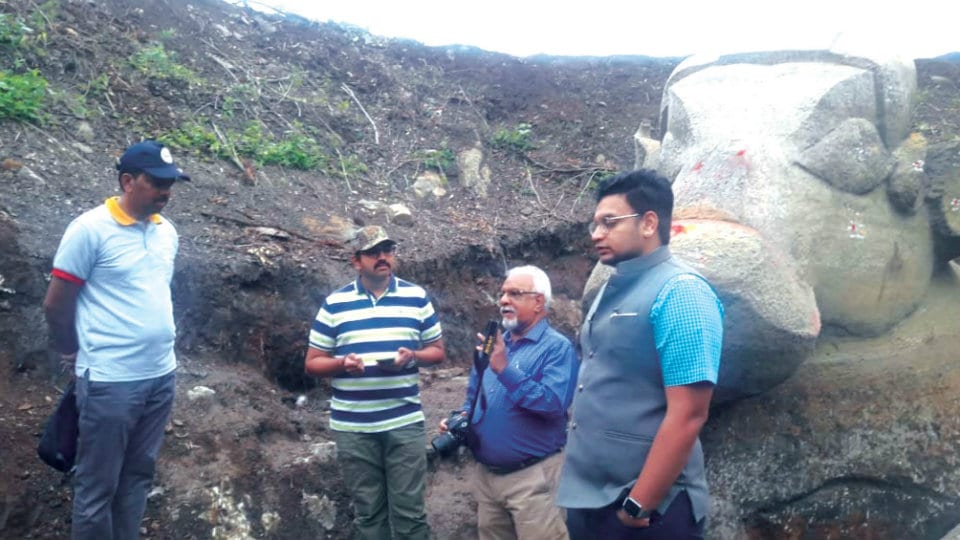 Mysuru: Following the discovery of two giant statues of Nandi (sacred bulls) in a nondescript field at Arasinakere in Jayapura Hobli of Mysuru taluk, scion of Mysore royal family Yaduveer Krishnadatta Chamaraja Wadiyar visited the village to see the statues and take stock of its historical importance and archaeological value.

The Nandi statues were unearthed by the villagers last Sunday after a four-day operation and ever since, the statues have been gaining attention. According to legend, Jayachamaraja Wadiyar, who had heard about a temple that had remained under water, came to the village and saw water that had covered the entire field.

Today during his visit, Yaduveer heard the same story from the villagers. After closely examining the Nandis and after getting briefed by Prof. Rangaraju, Yaduveer told the villagers not to put vermilion and kumkum on the statues as chemicals might deface the historical structures. The villagers urged Yaduveer to take steps to make the historical site a tourism-interest place. Yaduveer was happy to note that Jayachamaraja Wadiyar had taken keen interest in excavating the statues.

Speaking to Star of Mysore this morning, Prof. Rangaraju said that after visiting the statues, they found many unfinished sculptures. “Interestingly, we found ‘Sati’ stone inside the village that indicates that the practice of ‘Sati’ was followed in the village. The stones date back to Hoysala period,” he said.

Sati is a funeral practice where a widow sacrifices herself by sitting atop her deceased husband’s funeral pyre. The practice is banned now. According to the inscriptions on the Arasinakere Sati stone, three women had immolated themselves after losing their husbands.

Prof. Rangaraju said that Arasinakere (translated to English means ‘King’s Lake’) has a lot of historical and archaeological value. “I have already spoken to Commissioner of Department Archaeology, Museums and Heritage T. Venkatesh and we have to preserve the statues and all the idols found there,” he said.

The Nandi statues appeared to belong to the 16th or 17th century, dating back to the post-Vijayanagar period. They resemble most of the sculptures carved out of the smooth soapstone during that period.

The statues are carved out of a single rock and are incomplete – while one is 60% complete, the other is 85% complete. Both the idols, though placed face-to-face are not identical in size.

The Department of Archaeology has already taken the entire site into its possession and more scientific excavations will be carried out to see if there are more historical idols buried under the earth.