Home » News » Yeddyurappa should prove his charge on Siddharamaiah: MP 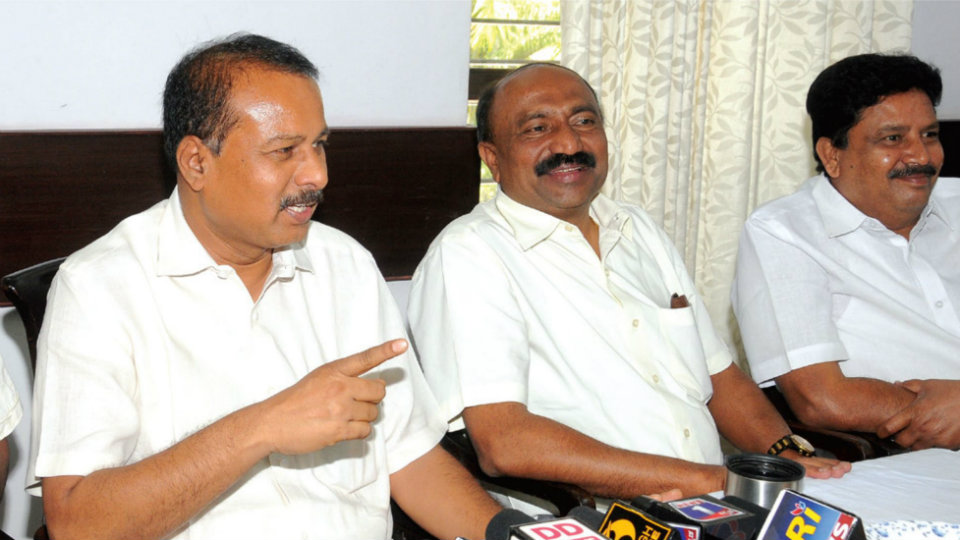 Yeddyurappa should prove his charge on Siddharamaiah: MP

Former Chief Minister B.S.Yeddyurappa, who has accused Chief Minister Siddharamaiah of paying Rs.1,000 crore to the Congress High Command to continue in office should first come out clean on corruption charges against him, said Chamarajanagar MP R. Dhurvanarayan here yesterday.

Addressing a press conference at Jaladarshini on Hunsur Road, he defended the decision of the Congress to field Kala Keshavamurthy against V. Sreenivasa Prasad in the upcoming bypolls to Nanjangud Constituency, saying that “when BJP can field a Congress deserter like Sreenivasa Prasad, what is wrong in  Congress fielding an experienced, mature and popular politician who is a JD(S) senior leader”.

Describing former CM B.S.Yeddyurappa as master at firing in air, Dhuruvanarayan substantiated his claim by questioning Yeddyurappa who had said that three more Ministers in the Siddharamaiah would be facing the heat soon.

While many BJP activists went to jail during BJP rule, none from the Congress have gone to jail during Congress rule which indicates that the Siddharamaiah government is clean, he opined.

It is for KPCC Chief to act: Distancing himself from the controversy over action against Congress leaders, who have publicly made statements about the style of functioning of the Siddharamaiah Government, the Chamarajanagar MP said “ It is up to KPCC President to initiate stern action against such leaders, who have defied the High Command’s direction that they should not make such statements in public.” Mylac Chairman H.A.Venkatesh, ZP Member C. Krishna, former ZP member K. Maruti were among those present.