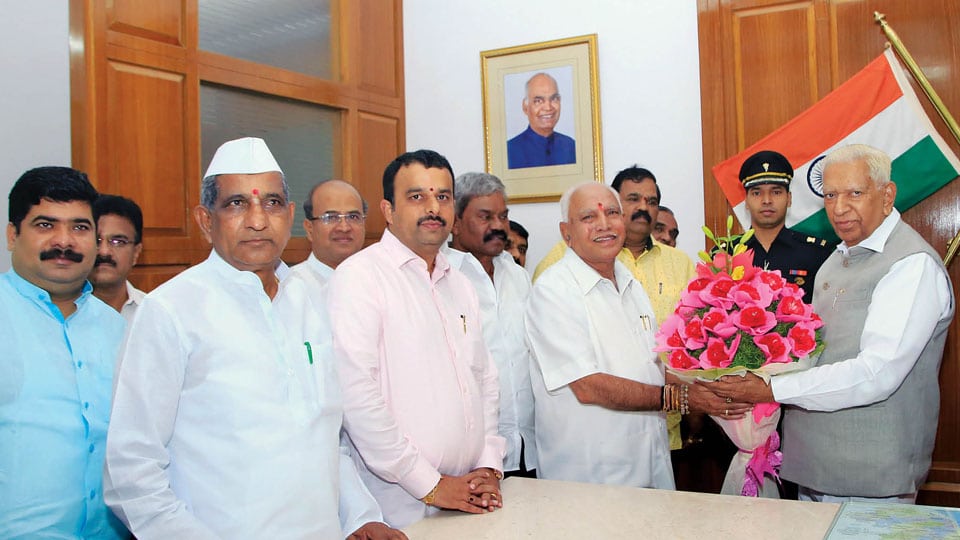 Yeddyurappa to take oath as CM at 6 pm today

Is this a pre-emptive move to ward off Speaker’s likely adverse move?

Bengaluru: Ending speculations over Karnataka’s political crisis, BJP State President B.S. Yeddyurappa was invited by Governor Vajubhai Rudabhai Vala this morning to stake claim to form the new Government. Seventy-six-year-old Yeddyurappa, a three-time Chief Minister of the State, will be sworn in at the Raj Bhavan between 6 and 6.15 pm today.

The development comes three days after the JD(S)-Congress coalition Government lost a Trust Vote on the floor of the State Legislative Assembly. Yeddyurappa will have to prove majority in the Assembly by July 31.

BJP’s delay in making the move had spurred speculation that the State might be heading towards a period of President’s Rule. Yeddyurappa’s move took everyone by surprise since the BJP Legislature Party didn’t formally elect him as the leader yet.

The sudden development came today morning and sources said that BJP National President Amit Shah has given a green signal to Yeddyurappa to form the Government. Also, former Speaker K.G. Bopaiah visited Yeddyurappa’s house at Dollar’s Colony in Bengaluru to discuss the Government formation and the numbers that the party has.

A group of Karnataka BJP leaders met Amit Shah yesterday and the party weighed its options following the fall of the Congress-JD(S) Government. Party sources said that Amit Shah asked Yeddyurappa to stake claim to form the Government in a pre-emptive move. Though the party had decided to wait for the Speaker’s decision and the Supreme Court’s directive before forming the Government, BJP leaders wanted to thwart any adverse move by the Speaker that will harm BJP’s prospects, sources said.

Soon after meeting with Bopaiah, Yeddyurappa came out of his house and said, “I am going to meet the Governor today at 10 am to stake claim to form the Government and I will request him to hold oath ceremony today itself.” Soon, he drove to Raj Bhavan to stake claim and the Governor asked him to take oath at 6 pm.

As per current tally, BJP has 105 members and support of one Independent MLA. Congress has 76 and JD(S) has 37. The current strength of Assembly is 221 after three MLAs — Ramesh Jarkiholi, R. Shankar and Mahesh Kumthahalli — were disqualified by the Speaker K.R. Ramesh Kumar yesterday under the Anti-Defection Law. The half-way mark thereby stands at 111. The speaker will decide remaining rebels’ fate in a couple of days.

The BJP move to stake claim to form the Government before the Speaker’s disqualification orders of the rest of the defected MLAs has taken the Congress by surprise. “Karnataka Assembly has become an experimental lab for BJP Karnataka,” said former Chief Minister Siddharamaiah. Taking to Twitter, Siddharamaiah accused the BJP of trying ‘unconstitutional’ ways to form the new Government in Karnataka.

“In what Article of the Constitution is the Governor allowed to permit the party to form Government that doesn’t have majority? It is a shame,” Siddharamaiah tweeted. He further said that BJP has the strength of 105 in the Assembly, which is way less than the half-way mark. “In no way BJP can form the Government if Constitution is followed. This only proves that BJP has no belief in the democratic values.”