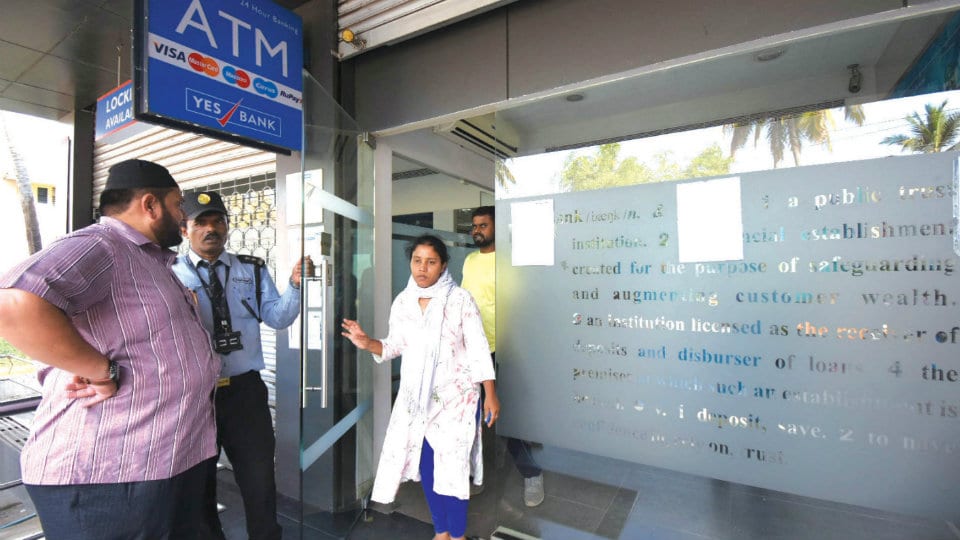 Mysore/Mysuru: Hundreds of harried Yes Bank depositors rushed to ATMs in city to withdraw cash but faced multitude of problems including closed down machines and long queues, after the RBI placed the bank under a moratorium, capping maximum withdrawals at Rs. 50,000 per account for a month.

Aggravating the problems of depositors were difficulties accessing the internet banking channel, which ensured that they cannot transfer the funds online as well. At the Bank’s branch on Kalidasa Road, people queued up in front of cash counters to withdraw cash as ATMs were not working and notices were pasted on the glass doors of the Bank. Panicked account holders rushed to homes to get cheque leaves to withdraw cash.

Customers rushed to the ATMs and the bank to withdraw money but even after waiting for hours, a few were left empty handed as there wasn’t enough cash available. Even during the evening hours, long queues were seen at the bank branch and ATMs in city yesterday.

A depositor said that it is possible to withdraw up to Rs. 50,000 through cheques. But ATM machines went dry within minutes of the RBI announcement, a lady customer said. The regulatory actions, undertaken by the RBI and the Government, came hours after Finance Ministry sources confirmed that SBI was directed to bail out the troubled lender.  “I don’t have any cash with me. I was here since morning to get some cash for my disposal but now I am going home empty handed,” said another Yes Bank customer.

A statement from the Yes Bank said, “This is a temporary moratorium made by the Government to protect the interest of the Bank’s customers. While the withdrawal limit for each depositor has been capped at Rs.50,000 in aggregate from all accounts, entire team of Yes Bank is committed to ensure seamless transactions for customers during the period of moratorium. If you require funds in excess of Rs. 50,000 for medical treatment, marriage, higher education or any other unavoidable emergency, a provision has been made for consideration up to Rs. 5 lakh with the approval of the Reserve Bank of India.”

“A solution is being worked upon to revive the Bank well before the moratorium period of 30 days ends. Please be rest assured that the interest of the customers is the top priority of the Bank. We are working towards ensuring that you can continue to bank with us with comfort and ease,” the statement added.

SBI to invest in Yes Bank

Under the draft plan, SBI would invest money in Yes Bank and own 49 percent of the restructured Bank. Yes Bank’s market value would also be revised to Rs. 5,000 crore with 2,400 crore equity shares with a value of Rs. 2 each, aggregating to Rs. 4800 crore.

The capital infusion would happen with SBI paying at least Rs. 10 per share and not the face value of Rs. 2. According to a back-of-the-envelope calculation, at Rs. 10 per share, SBI would have to fork out Rs. 11,760 crore to own 49 percent of the restructured  Yes Bank.