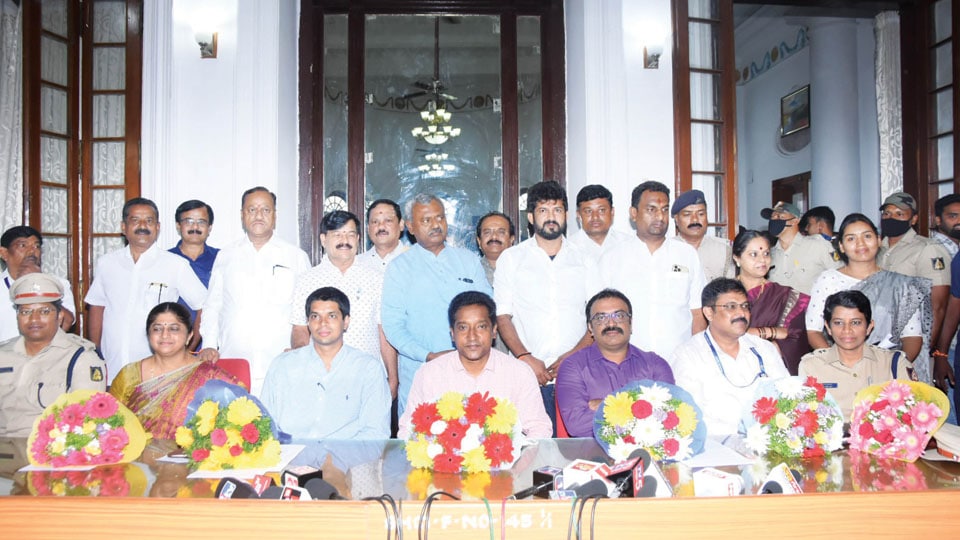 Yoga with Modi was memorable: Minister

Mysore/Mysuru: Terming Prime Minister Narendra Modi’s two-day visit to Mysuru was a tremendous success, Mysuru District Minister S.T. Somashekar said that the Eighth International Day of Yoga put Mysuru in the world map as PM Modi had led the event. “The event was successful and memorable and as a result of perfect coordination, I thank everyone who made this happen,” he said.

Addressing a press conference at Government Guest House last noon, the Minister, flanked by elected representatives, said that it was an unforgettable Yoga demonstration — Yoga for Humanity — in the presence of the Prime Minister.

“This was possible only due to the untiring efforts of the officials and staff, Yoga Federation, elected representatives, Chairpersons of Boards and Corporations, Yoga enthusiasts, Yoga Schools, educational institutions and the media. Even PM Modi expressed his happiness about the event with Chief Minister Basavaraj Bommai and wished to visit the State again,” he said.

“Though there was a little inconvenience, due to security measures, the people of the city cooperated well and over 15,000 people participated in the Yoga programme held at Mysore Palace. We had space for 17,000 participants and a QR-coded pass was provided for 14,000 people and arrangements were made to provide 15,000 yoga mats,” he added.

An inspiration to many

According to the Minister, the PM’s visit had inspired many people to adopt a Yoga lifestyle and has given a fillip to Yoga tourism in Mysuru. As Mysuru is the Yoga capital of India and now, the interest has been renewed and in the coming days, the number of health-conscious people will only grow, the Minister said.

“Apart from thousands of Yoga enthusiasts from Mysuru, there were many who had registered and came for the event from Mandya, Bengaluru and even Chamarajanagar. Learners from Morarji Desai Institute of Yoga, New Delhi, also took part, spreading the message of Yoga far and wide,” Somashekar added.

Mysuru was part of the novel programme ‘Guardian Yoga Ring’ and to mark the occasion, people from all walks of life including persons with disabilities, HIV-infected children, transgenders and Pourakarmikas joined PM Modi in Yoga performance, he said.

“It was a massive task to ferry Yoga performers to the Palace hours before the PM’s arrival and this task was efficiently managed by the officers and over 140 KSRTC buses were arranged and sent to the designated places and routes the previous night to get the crowd and also leave them at their respective places after Yoga,” Somashekar added.

Especially thanking the media for the wide coverage and publicity that started soon after the PM confirmed his Mysuru visit, the Minister said that the media coverage in the run-up to the Yoga Day helped in making the event most successful. “Also the people welcomed Modi and did not mind the inconvenience and the traffic restrictions that were imposed keeping in mind the route of PM’s cavalcade,” Somashekar said.