Home » News » Yogathon at Race Course on Aug. 28 to vie for Guinness Record 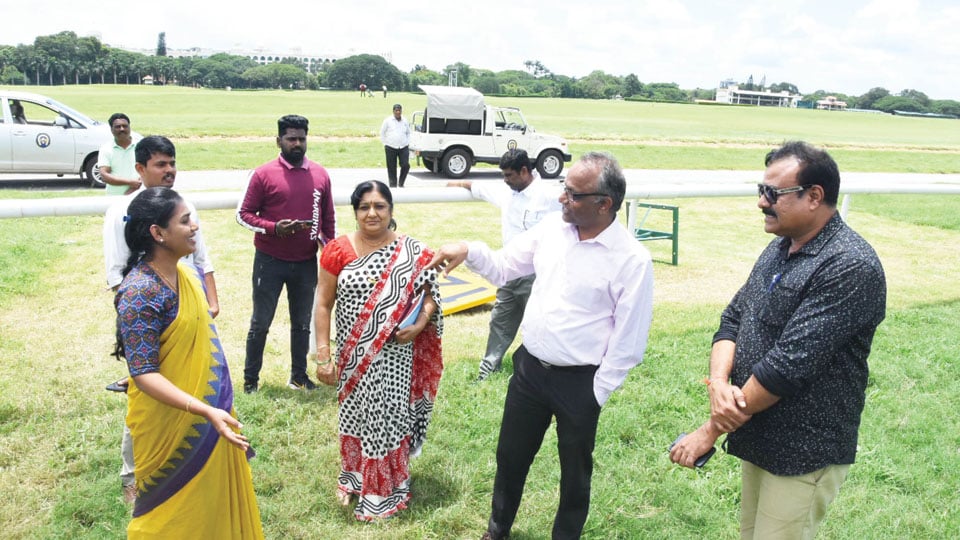 Yogathon at Race Course on Aug. 28 to vie for Guinness Record

Mysore/Mysuru: Following the State Government’s decision to organise ‘Yogathon’ at 31 districts across the State on Aug. 28 as part of the 75th year of Indian Independence (Azadi Ka Amrit Mahotsav) celebrations, creating a Guinness World Record, the Mysuru District Administration is looking forward to gathering more than one lakh people for the Yoga event.

As part of the feat, Assistant Commissioner Kamalabai visited the Mysore Race Course yesterday along with the officers of the Department of Youth Empowerment and Sports (DYES) and AYUSH.
Sports Minister K.C. Narayanagowda said in Bengaluru recently that the programme aims to gather about five lakh yoga enthusiasts from each district and set a Guinness World Record and also Yoga, which has its origin in Karnataka.

Actor and motivational speaker Ramesh Aravind is the ambassador for the Yogathon and the event will be held across the State with a budget of Rs. 5 crore from Corporate Social Responsibility (CSR) funds. The themes of the programme are ‘Yoga for Disease-free Life’, ‘Yoga for Good Health and Life’ and ‘Yoga for World Record’.

Though the State-level programme is aimed at organising five lakh Yoga enthusiasts from each district, the number is unrealistic. But a district like Mysuru can easily gather over one lakh Yoga performers at one place as in the past too, such a feat has been accomplished.

Kamalabai asked the officials to make all arrangements like drinking water and toilets for the Yoga participants. She advised officials to ensure that over one lakh persons will perform yoga together in the event so that it can set a Guinness World Record.

All the participants must enrol online and those interested can register their names by visiting www.yogathon2022.com. A decision on providing T-shirts and mats for the participants — sponsored by companies and private establishments — will be taken in the next meeting,  she said.

Committees that were constituted by the Deputy Commissioner (DC) for this year’s International Day of Yoga (IDY) on June 21 can be reconstituted and responsibilities can be reassigned, she added.

Students and teachers from the University of Mysore, Department of PU Education, JSS Educational Institutions, students and faculty from Medical and Engineering Colleges of Mysuru, Government and private sector employees, Yoga and Physical Education instructors can register for the event.