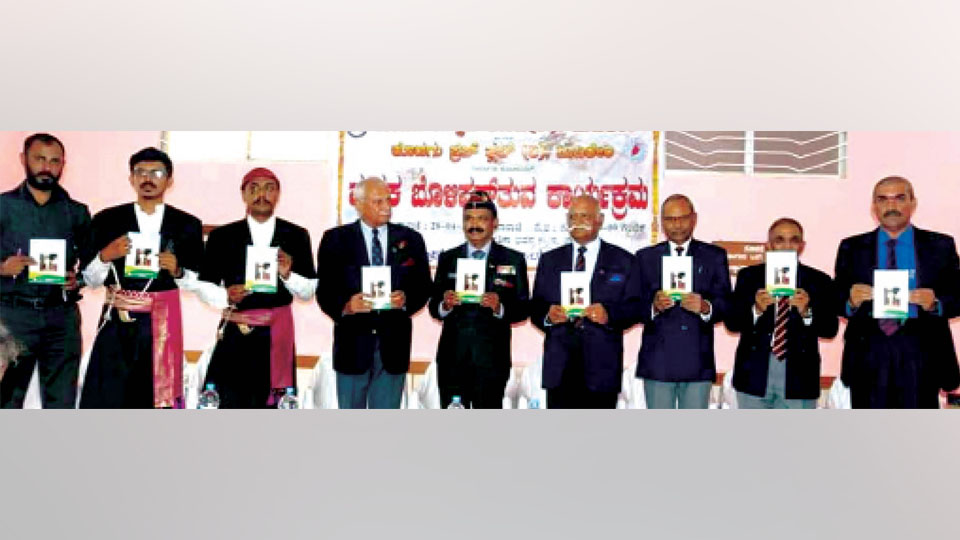 Madikeri: Several former Army Officers have called upon the youths to join the Army in higher numbers.

Speaking after releasing the English book titled ‘The Major who kept his cool’ brought out by Codava Makkada Coota at a programme organised at Kodagu Press Club in Madikeri on Sunday, Air Marshal Kodandera C. Nanda Cariappa PVSM, VM, said that many Kodavas have served the Army’s higher position, thus bringing laurels to Kodagu district and it is important that the youth continue with the tradition.

He complimented the book author Mookonda Nitin Kushalappa for throwing light on the life and personality of Lt. Col. Ganapathi.

Lt. Gen. Dr. BNBM Prasad SM, in his address, said that military officers from Kodagu have earned a special name in the Army and this tribe must continue, for which more and more youths from Kodagu should join the Armed forces.

Pointing out that Kodavas invoke Mother Cauvery and nature, Dr. Prasad stressed on the need for saving Kodava Culture for future generations.

Lauding the courage, discipline and leadership qualities among Kodavas, he said these extraordinary qualities have played a vital role in Kodavas excellence in the Armed forces.

Maj. Gen. Bachamanda A. Kariappa, President, Kodagu (Coorg) Ex-servicemen Personnel Association, said that those who join the Army should aim at  occupying higher positions in their careers. Alleging that some politicians were making derogatory remarks against Soldiers, Kariappa condemned Chief Minister H.D. Kumaraswamy’s recent purported remarks on rural youths joining the Armed forces. He also accused the State Government of failing to allot lands to Ex-servicemen.

Complimenting the functioning of Prime Minister Narendra Modi, he said that the book would be an inspiration for the youths to join the Army.

Col. Kandrathanda C. Subbayya VSM, President, Field Marshal Cariappa General Thimmayya Forum, said that it was necessary to bring out more books on Armymen as it would motivate the youths to guard the nation at the country’s borders.

‘Maha Vir Chakra’ awardee Lt. Col. Ganapathi, in his address, regretted that the locals had failed to utilise Army opportunities though a Sainik School was established in Kodagu district.

Stating that the parents were hesitant to send their children to Sainik School for want of appropriate facilities, he pointed out that the eagerness to learn in Sainik School was more important than the facilities available there.

Ajjamada Ramesh Kuttappa, President, Kodagu Press Club, in his address, regretted the politics being played over Servicemen now a days.

Pointing out that Patriotism and Nationalism have become important factors in the ongoing Lok Sabha Polls, Ramesh expressed concern about ‘Vote Bank’ politics being played by political parties involving the valour of Armymen.

Emphasising on the need for making the valour of heroic Armymen wretched in the minds of the people forever, he observed that it was essential to record the achievements of every soldier in the form of a book.

The book author Mookonda Nitin Kushalappa said that this was his fifth work and expressed the hope that the achievements of Lt. Col. Ganapathi explained lucidly in the book would be an inspiration for the present day youth and the generations to come.

‘The Major who kept his cool’ is the 25th publication brought out by Codava Makkada Coota. Lt. Col. P.S. Ganapathi and the book author Mookonda Nitin Kushalappa were felicitated on the occasion.