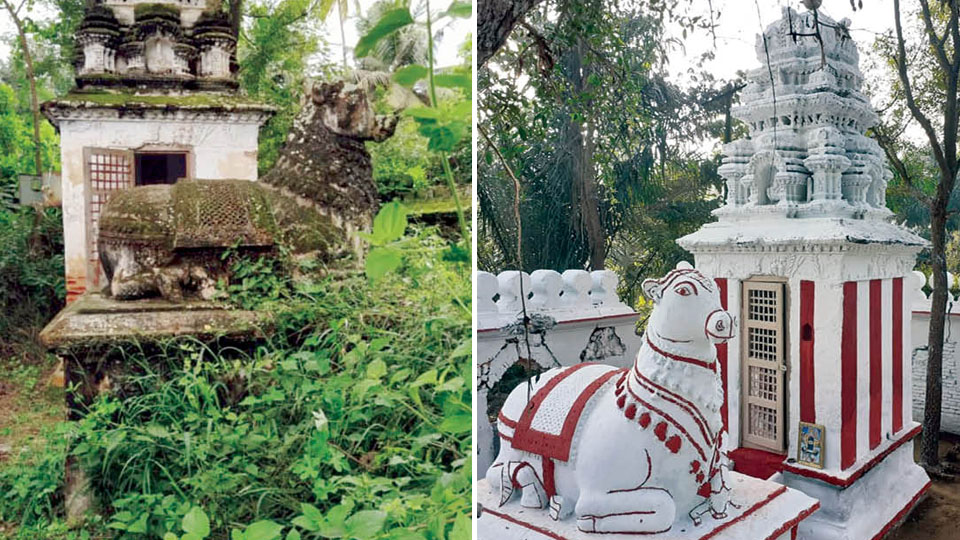 Mysuru and surrounding areas is home to several temples whose intricate architecture on stone speaks volumes of the craftsmanship of the ancient rulers, especially the Wadiyars.

But not all of them are maintained well by the Departments concerned. Some remain far away from the radar of the Archaeological Survey of India (ASI) and Hindu Religious and Charitable Endowment Department. The realisation was enough for a group of enthusiasts from Yuva Brigade to take initiatives to restore dilapidated temples in the district.

The Brigade has a history of renovating many temples, ancient monuments, rivers and Kalyanis and the latest to be added to the list is the Veerabhadraswamy Temple at Ganjam in Srirangapatna.

Though many other temples in Ganjam and surroundings have been maintained in a good condition, thanks to the continuous flow of devotees, this particular temple was crying for attention since long.

Weeds and bushes had covered the entire temple premises and though it is located by the side of the road, it was not visible as thick growth dominated the area. The plight of the temple was posted through a video on social media by a visitor which caught the attention of Yuva Brigade members.

The Brigade formed a team to clean the temple and give it a facelift. The team worked for two months on weekends and holidays and transformed the temple. While doing this, they regularly updated the social media about the progress of the works. Seeing the good work being done, many people contributed cement, paint and limestone.

The group started its restoration work after seeking the permission of the residents. They cleared plants and foliage that had sprouted from the dilapidated structure. “Seeds get deposited on the structure through bird droppings. Limestone (which the structure is made of) and rain water facilitates their germination. If left unchecked, vegetation can cause potential damage to the temple’s structure,” Chandrasekhar of the Yuva Brigade told Star of Mysore.

Before the restoration works, the team found that miscreants had stolen the historic idol from the sanctum sanctorum. After the works were completed, the Yuva Brigade members installed an idol as per traditions and consecrated the temple. Later, an iron door was fixed to protect the idol and electricity connection was provided to the premises.

Once the renovation was complete, a Deepotsava was recently held on the third ‘Karthika Somavara’ and local villagers were invited to the event. The keys of the temple were handed over to villagers, Chandrasekhar added.