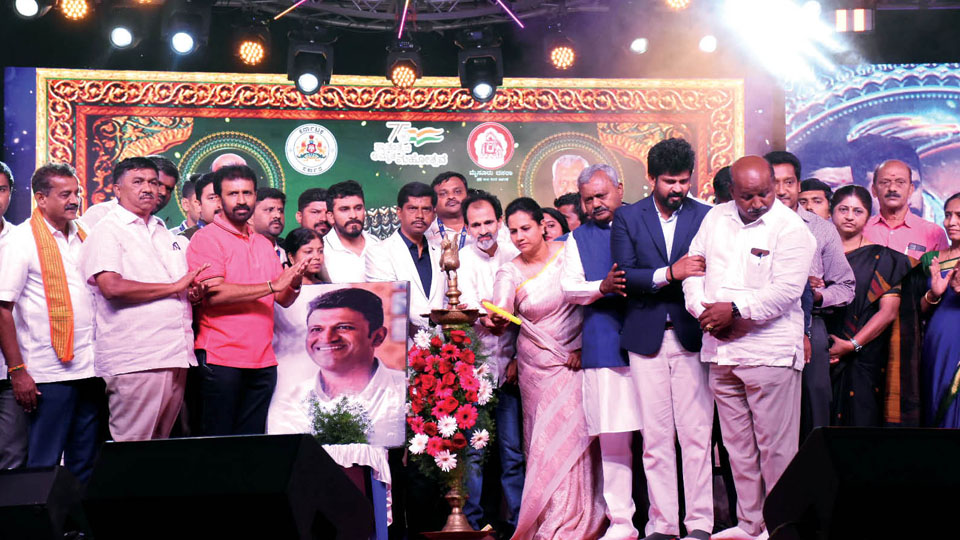 Mysore/Mysuru: Delayed by two days, Yuva Dasara got off to a colourful start at the sprawling Maharaja’s College Grounds last evening. True to its name, the event attracted thousands of youths. As the performance began, there was little place for movement as the entire Grounds was jam-packed.

Flower petals were showered on the portrait of Puneeth Rajkumar and his contributions were silently remembered. The day was called ‘Appu Namana’ where many of his hit songs were performed. Well-known names in the music industry like Gurukiran, Vijay Prakash, Kunal Ganjawala and Anuradha Bhat performed and thoroughly thrilled the audience who leapt with joy as they heard Appu’s songs.

The evening began with a Kodava cultural dance performed by the students of Cauvery College, Gonikoppa and was continued with the performance of a dance troupe from Mysuru. Many dances of Appu films were performed.

The icing on the cake was TV star anchor Anushree, who took over the responsibility of conducting the programme in her typical style, smile and catchy dialogues. On many occasions, she mentioned that Appu was still being seen and experienced on stage and off stage. “Actually, it is ‘Appu Sambhrama’ and not just ‘Appu Namana’ and today we are celebrating his presence,” she said and the audience cheered her.

The star attraction of the evening was the performance by Gurukiran, Vijay Prakash and Kunal Ganjawala. They performed to the songs enacted by Puneeth in his movies through which he became a household name, starting from his first movie till the last one before his untimely demise.