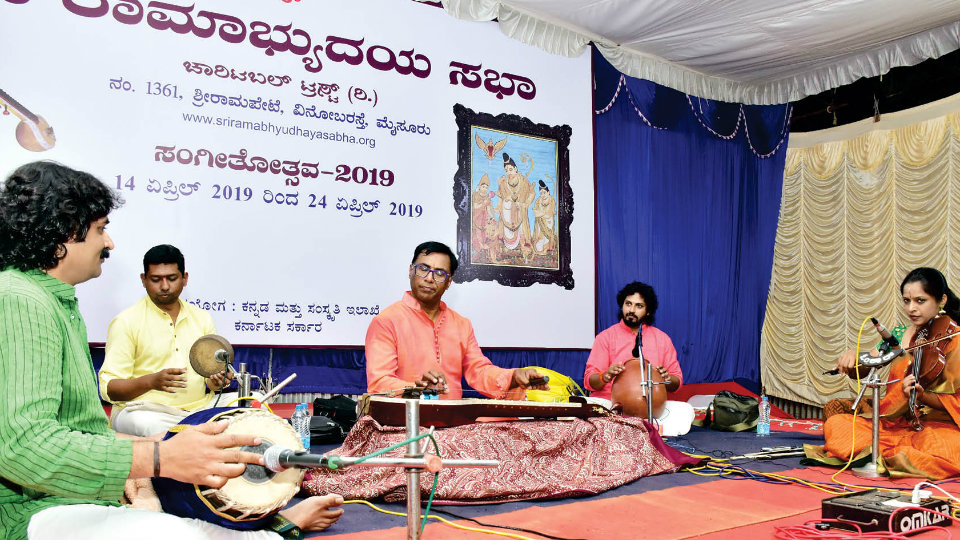 On the 9th day of Ramotsava at Alamma’s choultry, Indian Mozart N. Ravikiran gave a chitraveena concert accompanied by his disciple Akkarai Subbulakshmi on violin, Tumakur Ravishankar on mridanga, Purushottam on khanjira and Vid. Vazhappally Krishnakumar on ghata.

Ravikiran’s mastery over this instrument is legendary. Shruti Shuddham, sahitya as we hear in vocal music, presentation in performance, diversity of musical ideas and aesthetics mark his concerts. In the rendition of each composition he shows the importance he gives to lyrics.

As always, Ravikiran was conversational during the concert. He dedicated the present concert in honour of T.P. Vaidyanathan, whom Mysuru lost recently. The concert began with Deekshitar’s ‘Gajananayutam Ganeshwaram’ in Chakravaka with the artiste’s observation that Deekshitar has always used the prayoga ‘smgm’ in chakravaka unlike ‘srgm’ as seen in other composers.

A beautiful sketch of Mandari led to Tyagaraja’s ‘Paraloka bhayamu’ in Adi tala, which also saw lively swaras both by the vocalist and violinist. After Mandari, Ravikiran left the choice to the audience. Tyagaraja’s another composition ‘Bhuvini Dasu’ in Sriranjani regaled the listeners with his artistry. Scaling Janaranjani with aesthetic sancharas, Ravikiran played ‘Pahi mam Shree Rajarajeshwari’ on the request of the audience.

Replying to a query from one of the listeners, Ravikiran explained the structure of the instrument.  ‘Gotu’ (hence the word Gotuvadyam formerly played by his father Narasimhan and his grandfather Narayana Iyengar) is used in Chitraveena which has no frets and is made of Teflon and Delrin — a combination of both. Ravikiran has also added sympathetic strings for improvisation. He has introduced several technical innovations on the chitraveena, which have enabled him to produce phrases of incredible continuity with a single strum, which is an impossibility in plucked instruments.

Hamsanandi was the next demand from the audience in which Ravikiran played Lalita Dasar’s  ‘Pavana guru parama puradheesham Ashraye’ for which intellectual swaras dipped in raga bhava were also developed.

The highlight of the concert was an innovative raga – tana- pallavi in Kambhoji. After an elaborate ragalapana, which was a testimony to his vidwat, tanam was played in ragamalika in Saramati in the lower octave, Ahiri and  Saranga in the middle and Shahana in the upper, alternately by the main artiste and the violinist and closing in the reverse order. The pallavi was short, the lyrics being ‘Raghava Madhava Keshava Mamava Pattabhi’, the lines of the pallavi being sung by Ravikiran, set to Trishra nade Adi Tala.Tumkur B. Ravishankar, Purushottam and Krishnakumar played with considerable restraint and attracted immense applause from the audience. The concert concluded with a self-composed tillana in Sindhu bhairavi.