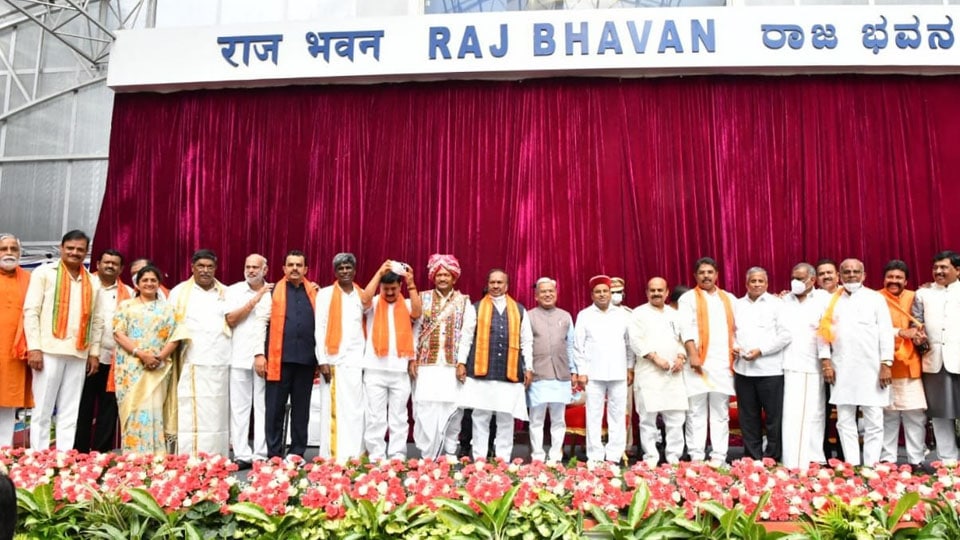 Bengaluru: A week after he was sworn-in, Chief Minister Basavaraj Bommai formed his Cabinet with the induction of 29 BJP Legislators at a ceremony held at Glass House in Raj Bhavan this afternoon.

Governor Thaawarchand Gehlot administered the oath of office and secrecy to 29 new Ministers. The swearing-in ceremony was on when we went to the press.

While Bengaluru City has the maximum number of seven Ministers — R. Ashok, V. Somanna,  S.T. Somashekar, Byrathi Basavaraj, Munirathna, Gopalaiah and Dr. C.N. Ashwathnarayan — as many as 13 districts do not have any representation.

However, MLC MTB Nagaraj, who lost to Sharath Bachegowda in 2019 bypolls from Hoskote in Bengaluru Rural district, too was inducted. He had represented the seat while in the Congress before. Another inducted MLC Kota Srinivas Poojary is from Udupi but also represents Dakshina Kannada.

Though B. Sriramulu is from Ballari district, he represents Molakalmuru Assembly segment in Chitradurga district.

While two of the three Deputy Chief Ministers in the previous Yediyurappa Cabinet — Dr. C.N. Ashwathnarayan and Govind Karjol — succeeded in becoming Ministers in the Bommai Cabinet, the other Dy.CM Laxman Savadi has been left out.

Former CM Yediyurappa’s son B.Y. Vijayendra,  State BJP Vice-President, who was expected to get a Cabinet berth, has not been considered.

READ ALSO  He converted his Shiggaon house as COVID Centre

The new Cabinet includes 8 Lingayat, 7 Vokkaliga, 7 OBC, 3 SC, one ST and one woman Minister. The portfolios will be allotted in a couple of days, it is learnt.

The six old Mysuru region districts of Mysuru, Kodagu, Chamarajanagar, Hassan, Ramanagara and Mandya have got a raw deal again as only K.C. Narayanagowda, who represents K.R. Pet Assembly segment in Mandya district, has been inducted in the Cabinet while five other districts have nil representation. These districts had little representation in the previous BSY Cabinet too with only two Ministers — Narayanagowda and Yogeeshwar.

At least six aspirants from these districts were hoping to get into the new Ministry. But to their utter disappointment, none of these aspirants, who chiefly included K.R. MLA S.A. Ramdas, Chamaraja MLA L. Nagendra, Virajpet MLA K.G. Bopaiah, Madikeri MLA Appachu Ranjan, Hassan MLA Preetham Gowda and Gundlupet  MLA C.S. Niranjan Kumar, have made it to the Cabinet.

The new Cabinet has an imbalance in terms of representation of districts is concerned. While Bengaluru City has seven Ministers and several other districts such as Haveri (including CM Bommai who represents Shiggaon Assembly in the district), Belagavi, Tumakuru, Shivamogga and Bagalkot have two Ministers each, 13 districts,  most of whom are politically and strategically important big districts, have no representation at all. They are: Mysuru, Kodagu, Hassan, Chamarajanagar, Chikkamagalur, Vijayapura, Raichur, Kolar, Kalaburagi, Yadgir, Ramanagara, Ballari and Davanagere.

Bommai, who had gone to New Delhi on Aug.1, returned to Bengaluru only this morning along with the BJP High Command-approved list of Ministers and handed it over to the Governor.

The CM, who later addressed a press meet, said that the list of Ministers has been sent to the Raj Bhavan and all those who find mention in the list will be inducted at a function to take place in Raj Bhavan at 2.15 pm.

Pointing out that there will be  no Deputy Chief Ministers in his Cabinet, he however did not spell out the names of Ministers who found mention in the list.