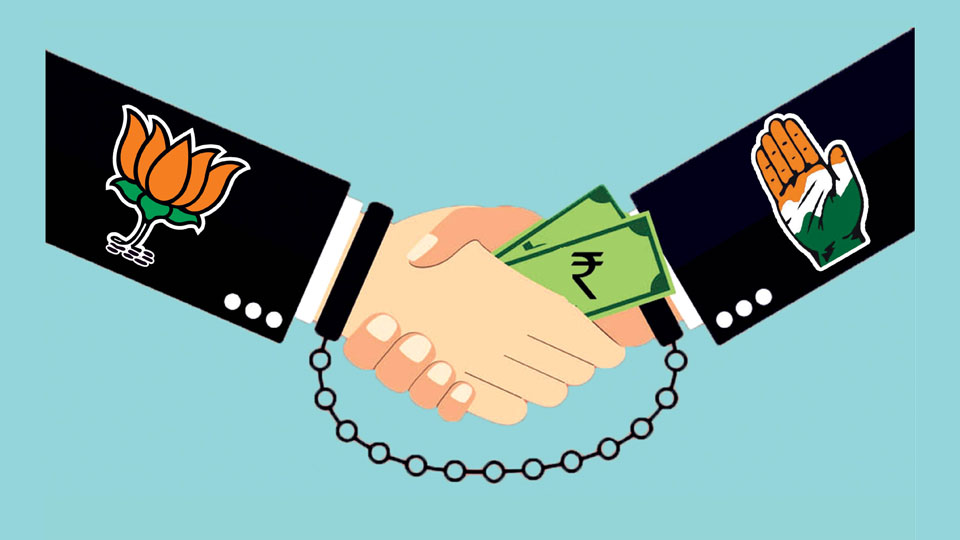 Come elections, and along come allegations. And so, it continues, the politics of allegation never leading to prosecution. Rarely are allegations by an Opposition party taken to their logical end.

The Opposition party will kick and scream. They will organise yatras, sit for dharnas and declare bandhs against the ruling party’s corruption. But when they come to power, they do nothing about the issues ‘they were’ fighting for!

In Karnataka, the Congress party has again raked up the 40% commission issue but will it take action?

We ask because it was the Congress party that took away the power of Lokayukta, which operated under an independent Judge and gave it to the Anti-Corruption Bureau (ACB) that served under the CM!

Thankfully a High Court Bench abolished the ACB, with a question, “How can ACB take action against the CM and members of the ruling party when ACB comes under the CM?!”

The BJP, which was in Opposition when the ACB was formed, did nothing to abolish it when it came to power; the court had to do it.

So, it’s evident that every political party wants to control institutions that can prosecute the corrupt because the political class indulges in high-level corruption.

On Wednesday, the Karnataka State Contractors Association (KSCA), led by its President D. Kempanna, met Congress leader and Leader of Opposition in the State Assembly, Siddharamaiah, regarding the 40% problem.

Kempanna, speaking to the press, said Siddharamaiah had assured him that he would raise the issue in the Assembly during the next session, which is next month.

We have to ask… Really!… How? With what face and moral right are these people, the contractors and Congress, raising this issue?

Haven’t the contractors sinned? Today, Kempanna, the Association President, asks in frustration, “They are shameless people. They ask for a percentage. Are these people our public representatives?”

We wish Kempanna felt this disgust when his fellow Government contractors built canals that cracked, schools that caved in and roads that turned into puddles within just two monsoons.

All these years, the contractors were silent when politicians robbed the taxpayers and shared the loot with them. Now when the politicians are robbing them, they have a problem.

The contractors now want to protest but, ironically, not against the demand for bribes. They are against the increase in the bribe amount!

The Congress party, while raking up the 40% issue, must recall that Kempanna, a few months ago, said, “The contractors decades ago used to give 2 percent bribe to local leaders. Then during the Congress’ tenure (2018-19), a Minister’s Department used to take 10 percent of the total tender cost.”

It’s funny that Kempanna is giving his complaint of 40% commission to an ex-Chief Minister, during whose time, he says, the commission went up to 10 percent!

Congress is not ashamed that they are being accused of increasing the bribe to 10 percent. Instead, they are bothered about the BJP increasing it by 30 percent! Are they envious that BJP is looting more than them?

It is the Opposition party’s duty to expose the ruling party’s exploits, but they don’t. Why?

The man who mastered the art of alleging, ‘master-Alleger’ Arvind Kejriwal is probably correct when he says, “I feel both the parties (BJP & Congress) have a husband-wife kind of a relationship. They know each other’s secrets.” This reminds us…

The Karnataka State Contractors’ Association President has stated that BJP MLA from Rajarajeshwari Nagar Munirathna is corrupt and harassing contractors.

Munirathna was a Congress MLA until 2018. During his time with Congress, he was accused in the Rs. 1,500 crore fake bills scam. He was also caught with files relating to Government land at his home during a Lokayukta raid! Back then the BJP asked for an investigation, and Congress did nothing about it.

In 2018 Karnataka Assembly elections, Munirathna again stood on a Congress ticket. The Election Commission raided an apartment and seized over 9,000 voter ID cards. Munirathna’s name had figured in the scam, and the BJP again accused him of indulging in election malpractice.

During this time, Prime Minister Narendra Modi was campaigning in Karnataka. And in his campaign speech spoke about this voter ID issue and said, “Thousands of voter ID cards were seized. You (voters) be alert. Such sin cannot be allowed during the celebration of democracy (polls).”

But what happened next?

Just a year later, BJP gave him an MLA ticket!

No wonder Munirathna so confidently warned his accusers — either produce proof of corruption before the Governor and Lokayukta, else tender an apology or face Rs. 50 crore defamation!

Ah! Checkmate Congress, checkmate BJP and checkmate KSCA also because Munirathna was a member of KSCA too. So he knows everyone’s secrets, so no one can touch him.

When political parties indulge in horse-trading, what we get is two national parties divided by ideology but united by corruption and unable to achieve prosecution.

The BJP wants a ‘Congress-mukt Bharat’, but a ‘Corruption-mukt Bharat’ would be a nobler aspiration. The people wish for low-level corruption to end; that’s their ‘Mann Ki Baat’.

We wonder when the BJP will make laws to curb corruption. And when will any political party prosecute the other?

Is there a tacit understanding between the two national parties to protect each other’s corruption? Where they only allege but never prosecute? I, for one, think so.

That is why I say with a 100% guarantee that this 40% commission issue will be 1,000% closed after the election, even if Congress comes to power with a 100% majority.