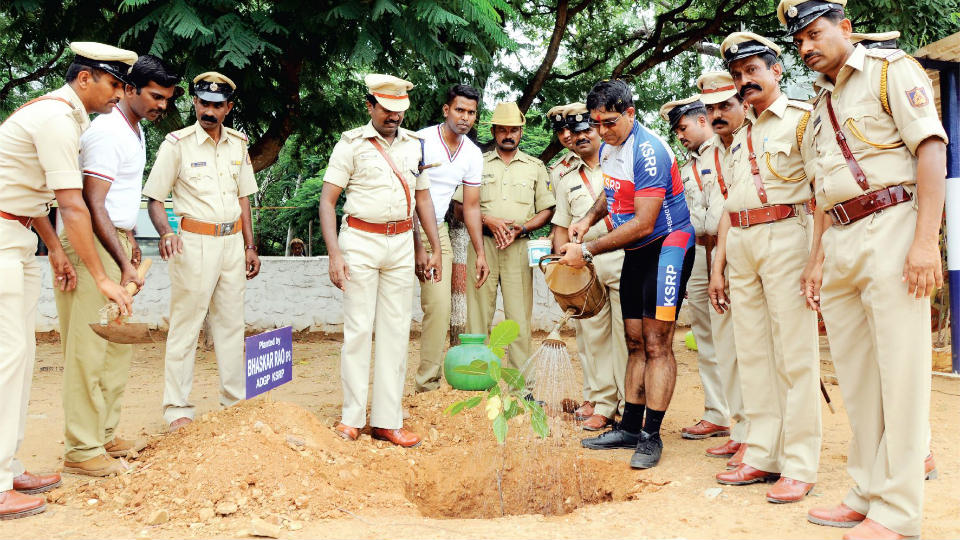 Mysuru: There is shortage of 4,500 Police personnel in KSRP. We have also not been able to implement the Supreme Court order of giving promotion to a few, regretted Karnataka State Reserve Police (KSRP) ADGP Bhaskar Rao. He was speaking to the media at the KSRP Grounds, here on Sunday and said that there are 4,500 vacant posts in KSRP and the State Government was filling it in stages.

In the coming days, it has been decided to observe Martyrs Day in KSRP too. The Government has already allotted 150 buses to us. Band sets have been given to all the battalions at a cost of Rs. 1.50 crore. The cooking sets on the lines of the one in Dharmasthala is provided to all the kitchens, he said.

A modern touch is being given to KSRP. A lot of thinking has gone into make the KSRP a more dynamic force and to wean them away from disinterestedness, untimely death, suicidal tendencies and instead to create self confidence and self belief, he said.

“The Cycle Jatha, which began from Bidar on July 12 will end in Bengaluru on July 25. To keep the activities in the KSRP alive, always this Jatha has been undertaken. The aim of the Jatha is to spread the message of unity, integrity and to create awareness about Swachh Bharat. It is also to highlight that Karnataka-Hyderabad region, Karntaka-Karavali and Karnataka-Mumbai are all a part of the State,” said Rao.

“During the Jatha, people’s feelings have been understood. We have interacted with them. We have to educate the children and understand that not just the Police, even the public are part of the society. We are working in the public sphere, is the awareness we are creating as part of this campaign,” he said.

“In every district, 60 saplings have been planted during the Jatha. Emphasis has been laid in the tourism circuits like Vijayapura, Udupi, Hampi, Belur-Halebidu and Mysuru to increase the use of bicycles. The Home Department will be approached for the permission,” he said.

There are reserve forces in two camps in Vijayapura and Munirabad and training is given to tackle problems in Jammu and Kashmir and Naxal activities. Similar training is planned for KSRP also, he said.