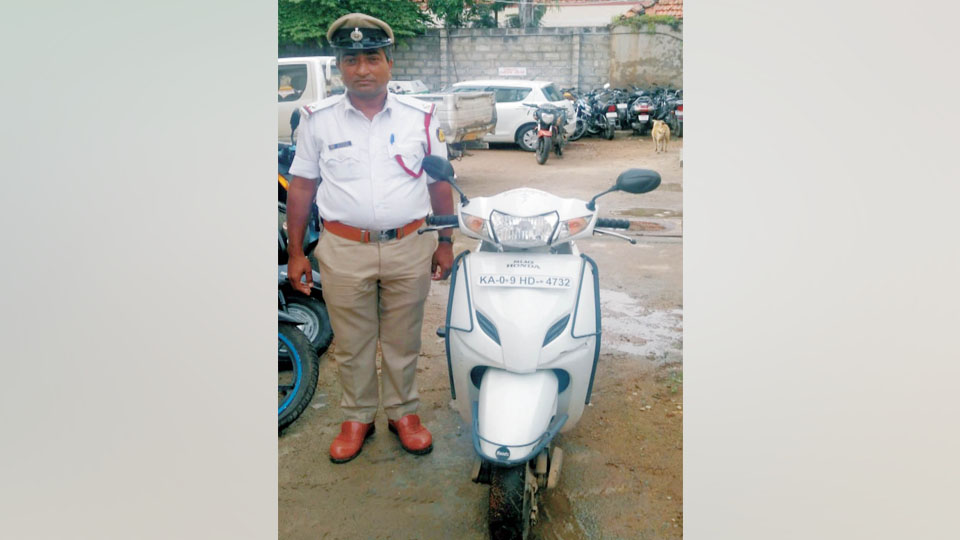 635 traffic violation cases on this scooter!

And to recover the money, the Police have to plan different strategies as even if they auction the scooter, they will not be able to recover the fine amount that stands at Rs. 63,500.

During a routine check as part of the ‘Traffic Management and Road Safety Month’, the Narasimharaja Traffic cops yesterday caught a Honda Activa scooter (KA-09-HD-4732) owned by one K. Madhuprasad and when the officer checked the details of the scooter, he was shocked to see that the vehicle had 635 cases and the fine amount stood at Rs. 63,500.

The traffic violations were caught on CCTV cameras installed at various junctions in city and the Police, based on the CCTV footages had fed the information on Smartphones that is accessed and operated by traffic Policemen at junctions.

Speaking to Star of Mysore, Jayakumar, Inspector of Narasimharaja Traffic said that though the vehicle is owned by K. Madhuprasad as the RC book has been registered in his name, they have to check if the owner has sold the vehicle or not.

“We will issue notices to the vehicle owner as per procedure and also file a case. We will wait for the directives from the Court. Either way, the owner of the vehicle must cough up the fine,”        he said.

It may be recalled here that on Nov. 2, 2017, the city Traffic Police stumbled upon a Bajaj Platina bike and discovered that the bike had 201 traffic violation cases against it. The owner was identified as Roshan Ali Baig, a resident Rajivnagar in city.

When the cops asked him to pay a fine of Rs. 20,100 for the violations, the man told them that the bike cost him Rs. 10,000 and he does not have so much money to pay the fines and left the bike with the cops.

4 COMMENTS ON THIS POST To “635 traffic violation cases on this scooter!”