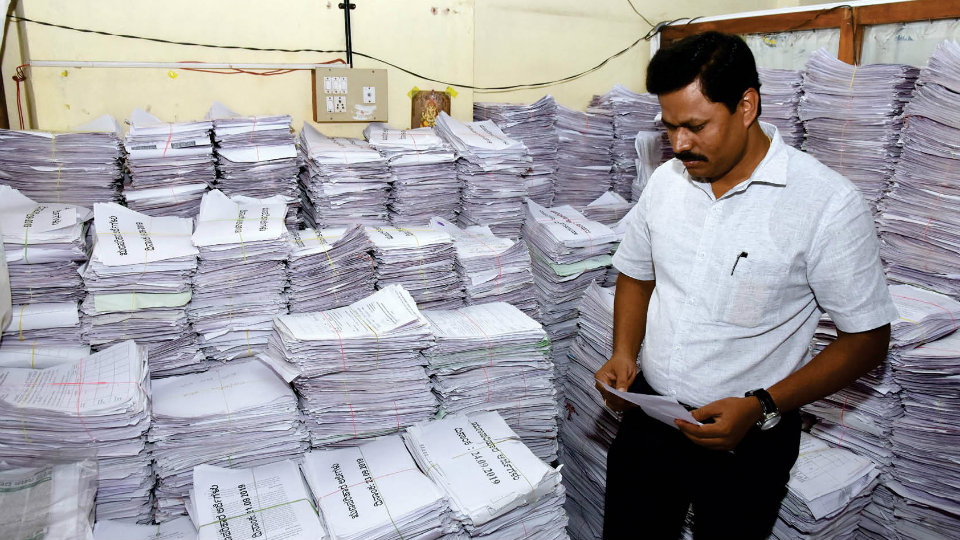 Mysuru: The Mysuru District Administration has received a whopping 66,400 applications from people seeking relief under the Debt Relief Act that was passed by the previous Coalition Government headed by H.D. Kumaraswamy.

The State Government had invited applications from people who are eligible for relief under the Act and had fixed Oct.22 as the last day to submit applications. In a district, AC is the Nodal Officer to receive applications.

The Debt Relief Act is aimed at releasing small farmers and agricultural labourers (who earn not more than Rs. 10,000 per month) from clutches of money-lenders and pawn-brokers. Though the Act dates back to 1976 introduced during the rule of then CM D. Devaraj Urs, it was again passed in the Legislative Assembly this year at the fag end of Kumaraswamy Government and the Bill got President’s assent on July 16 this year.

Government says it will implement the Act only after the Court settles the matter. However, sources say, the announcement made in July 2019 before H.D. Kumaraswamy stepped down as CM was for “mere publicity” and unlikely to be realised.

After the President gave his assent, targeted beneficiaries from across the State began to file applications. As applications began to pour-in in thousands, the State Government directed the ACs to function as Nodal Officers in their respective districts.

Applications were received from Aug.16 to Oct.22. The authorities have confirmed that they had received 66,400 applications. They have been bundled date-wise and stored in the DC Office. Now the process of segregating the applications taluk-wise is on and all the data is being entered into the computer.

The State Government has come up with exclusive software to store the data through a dashboard. Although the beneficiaries were asked to submit applications in their respective taluks, many people from neighbouring districts such as Mandya and Chamarajanagar have submitted their applications in Mysuru which has contributed to the high number of applications.

Beneficiaries are being categorised under three heads — landless labourers, economically poor and micro farmers. Their annual income must not be above Rs.1.2 lakh. All the applicants were asked to submit necessary documents according to their classification. Now the process of compiling data is on.

Speaking to Star of Mysore, Mysuru AC Dr. N.C. Venkataraju said the process of taluk-wise segregation of applications was under progress. A special counter has been opened at DC Office and 10 data entry operators have been employed on a contract basis to do jobs related to the processing of applications.

Once the data is entered, the dashboard can be opened by any Government official to access the data. It will be a ready-reckoner for district-wise data under the heads of total amount, total gold pledged, total land pledged and how much money is needed to waive off the loans, he said.

Who are the beneficiaries?

Under the Act, agriculture labourers, landless labourers and small farmers having 2 acres of rain-fed land or less, whose annual income is less than Rs. 1.2 lakh and had taken loan from money-lenders or from any other private source, will get relief. It will be only a one-time relief and their loan will be waived off.

The scheme is applicable to those who have availed such loans on or before July 16 (the day of President’s assent and the subsequent notification on July 23) but it does not apply to future loans. Under the scheme, lenders would not be entitled for any compensation.

Meanwhile, Pawn-brokers have moved the Karnataka High Court seeking to exclude them from the purview of the Act. The Court directed the Government not to take any coercive action until further orders against pawn-brokers under Section 5 of the Karnataka Debt Relief Act.

The Court passed the interim order hearing petitions filed by Karnataka Pawn-brokers’ Association and more than 300 individual pawn-brokers, who have challenged the Constitutional validity of the Act.

Registered pawn-brokers have approached the Court as they would receive nothing for the loans they have advanced. As the matter is in the Court, the Government is limiting itself to data collection and storage right now. However the Government will implement the Act only after the Court settles the matter.

Officials estimate that debtors owe Rs. 850-Rs.900 crore to pawn-brokers, which will be waived if the Act is implemented. However, sources in the Government said the announcement made in July before Kumaraswamy stepped down as Chief Minister was for “mere publicity” and unlikely to be realised.