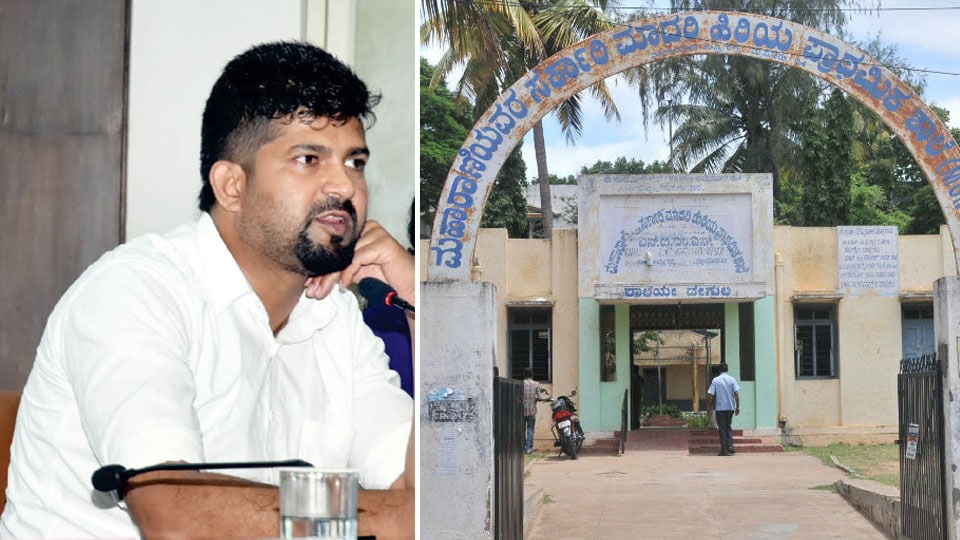 Why NTM School land not handed over to RK Ashram, MP questions DDPI

Mysuru: Mysuru Deputy Director of Public Instruction (DDPI) Panduranga had to face Mysuru-Kodagu MP Pratap Simha for not handing over the State-run Maharani New Type Model (NTM) School to Sri Ramakrishna (RK) Ashram to build a Viveka Memorial. The officer was taken to task by the MP for delaying the land transfer.

MP Simha was addressing officials during the progress review meeting of District Development Coordination and Monitoring Committee (DISHA), at Zilla Panchayat Auditorium in city yesterday when the issue of NTM School came up.

The Ashram wants to build Swami Vivekananda Memorial Cultural Youth Centre to commemorate the stay of Swami Vivekananda at the Niranjana Mutt when he visited Mysuru for the first time in November 1892. The Mysuru City Corporation (MCC), after renovating Niranjana Mutt, handed it over to RK Ashram. But as the space is not enough to meet the planned projects of the Ashram, the NTM School, adjoining the Mutt, was handed over to RK Ashram as per a Government Order.

Pratap Simha asked the DDPI why the land has not yet been transferred to the Ashram and asked him why the Department has not joined hands for a noble cause. Panduranga replied that Chief Minister B.S. Yediyurappa had made a file noting to save the NTM School and hand over the remaining land to the Ashram.

Irked by the reply, Simha asked the officer, “Don’t you know that the previous CM had officially ordered handing over the land to Ashram? This Order has to be followed. The present CM has just made a file noting. How many children are there in the school,” he questioned.

DDPI Panduranga said that there were 45 children in NTM School and at this point, the MP told him that there were many examples of children being shifted from one Government school to another due to lack of attendance and closing the school where there is poor attendance. “Why the same yardstick can’t be applied for NTM School,” Pratap Simha asked.

DDPI told the MP that there were several organisations who were opposing the shifting of children to another school and they had blocked the Department’s move. The Officer expressed his helplessness over the issue.

Sensing a deadlock of sorts, Deputy Commissioner Abhiram G. Sankar, who was also present on the dais, whispered something to the MP. Pratap Simha then directed the DDPI to be more proactive and follow up the issue.

The fruit is in great demand due to low production. The banana is grown only in some parts of Nanjangud. The MP urged the officials to take measures to improve the cultivation area as the crop would help the farmers to get handsome income.

Focussing on SSLC results, MP Pratap Simha asked officials to use private resource persons to conduct special classes and to make the students to face the exams with confidence. The MP took objection to last year’s results where Mysuru had slipped from 14th position to 17th place.

“See the data in which subject students have fared bad and identify the areas where they need improvement where special coaching needs to be given. These coaching classes can be held once a week and private resource persons can be invited to take classes,” Simha told the officials. He also added that retired teachers could be roped in to conduct coaching classes.

Chamundi Hill to be developed under Centre’s PRASAD Scheme

The MP directed the Tourism Department officials to invite exquisite designs from students of art schools based on which the arch gates leading to Chamundi Hill can be redesigned. During the meeting, Tourism Department Deputy Director Janardhan presented a Power-Point Presentation on the Rs. 41 crore overall development to be taken up atop Chamundi Hill under the Centre’s Pilgrimage Rejuvenation and Spiritual, Heritage Augmentation Drive (PRASAD) Scheme.

The Centre has chosen the Chamundeshwari Temple atop Chamundi Hill under its holistic PRASAD Scheme to develop without spoiling its surrounding ecosystem. PRASAD is a fully Central Government-funded scheme where Rs.100 crore will be granted towards development of temples.

Commenting on the presentation, MP Pratap Simha said that the project report was not up to the mark. “The arch gates design is not aesthetic and there is a need to re-dress the steps to ensure that no devotee slips on the steps. Also, steel railings must be laid along the steps in the middle and on the sides. There is a need to establish drinking water kiosks, landscaping of the area near Nandi Statue and other works,” Simha said.

On the design of arch gates, Simha said that suggestions could be invited from the students of Chamarajendra Academy of Visual Arts (CAVA) or from reputed artistes to come up with the design of arch based on religious and historical significance.

The MP expressed unhappiness over the project report and designs prepared by Infrastructure Development Corporation (Karnataka) Limited (iDeCK). “iDeCK takes one percent of project cost (Rs. 41 crore) to prepare an action plan. If such kind of shoddy action plan is prepared, what is the point in giving one percent of money to iDeCK,” he remarked.