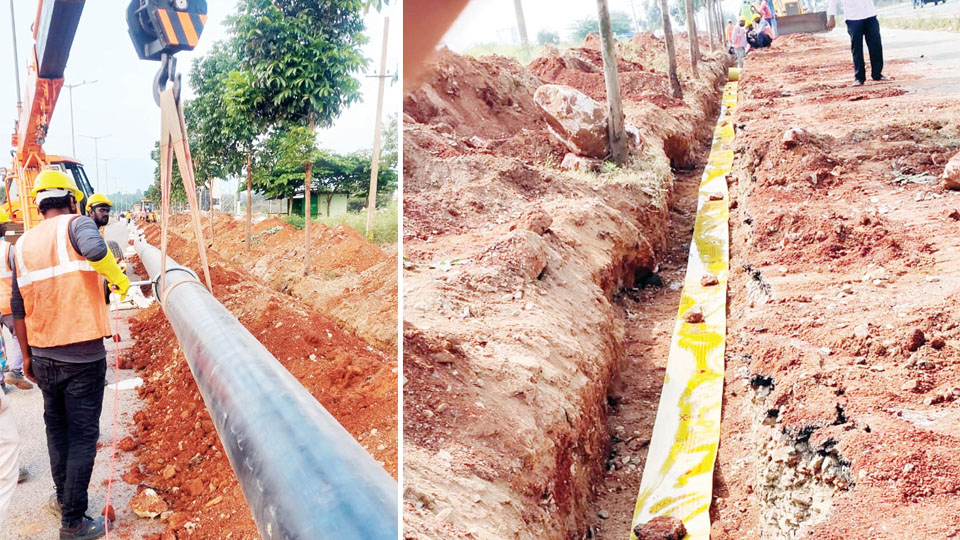 Mysore/Mysuru: The row kicked up by the ‘direct to home’ Piped Natural Gas (PNG) project launched by the Centre and being implemented in Mysuru has caused deep fissures among the BJP MLAs S.A. Ramdas, L. Nagendra and MP Pratap Simha and today, the MP claimed that there is no chance for anyone to pocket commission in the name of Central Government projects.

“In fact, none of the projects implemented by the PM Narendra Modi Government entails commission and in this project too, there is no such opportunity. Opposition to the project by elected representatives is unfortunate,” said Simha, addressing a press meet on the lawns of Jaladarshini Guest House.

The press meet was shifted to the lawns as the electronic media could not live-telecast the event due to absence of an internet network inside the hall where press meets are usually held.

“The Modi Government has launched many people-friendly projects including Gram Sadak that provides connectivity to villages, toilets to homes under Swachh Bharat, water for all under Jal Jeevan Mission, education through Beti Padao and gas pipeline to homes. These projects are coming to India after 70 years and I am shocked that elected representatives are opposing a people-friendly, cheap and a safe project,” he said.

For the project implementation, all norms have been followed and the road digging charges have been published in the gazette notification by the State Government. As per the rules, Rs. 2,000 has to be paid to dig one metre of road and Rs. 800 has to be paid to drill holes in the same length. Such roads have to be repaired with the consent of the Corporation after meeting standards. Here in the gas pipeline project, rules have been followed and there is no violation,” the MP said.

Compared to LPG (Liquefied Petroleum Gas), PNG is cheaper, safer and also efficient. “If a consumer pays Rs. 1,000 for an LPG cylinder, he will just pay half the amount for PNG. Mysuru has been selected for the project among 13 cities but our elected representatives are opposing the project giving silly reasons,” Pratap Simha said.

“As it is a gas pipeline project, work cannot be done in a haphazard manner. Krishnaraja and Chamaraja are not fiefdom of certain individuals and they must respect the wishes of people,” he said. Launching a direct attack, Pratap Simha sarcastically said that MLAs Ramdas and Nagendra are senior in politics to PM Modi and probably that is why they are opposing Modi’s projects.

“In Chamaraja alone, over 539.34 km of roads will be dug up and as per the standard rates fixed by the State Government, more than Rs. 300 crore will be paid as road digging charges,” he said and questioned the MLAs that why they were mute spectators when many telecom companies dug up roads to lay cables.

“As per the bylaws of the Public Works Department, any contractor who lays the roads has to maintain it for three years. Why do you lay roads every year during Dasara and what happened to the bylaws? Why do you demand fund release every year,” Simha questioned.

2 COMMENTS ON THIS POST To “‘Direct to home’ piped gas project – No chance to pocket commission: MP”