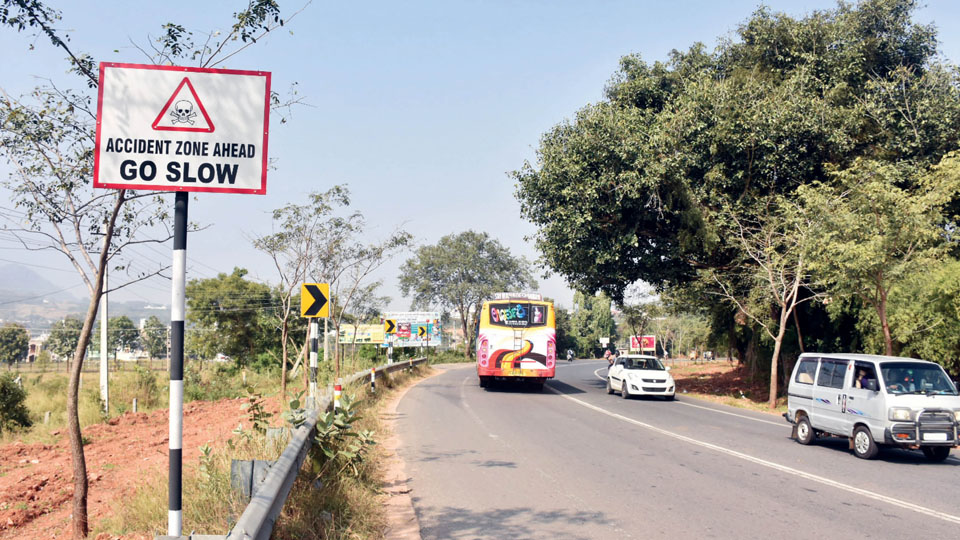 Motorists speed on these stretches despite warning signs, say Police

Mysore/Mysuru: Black spots account for 90 percent of the road accidents in the country. Over 60 percent of the black spots on National Highways in India where more than 28,000 deaths took place in road crashes in a period of three years have been rectified till October 2021 and a total of Rs. 4,512.36 crore has been spent nationwide.

In road safety management, a black spot is a place where road traffic accidents have historically been concentrated. It may have occurred for a variety of reasons, such as a sharp drop or corner in a straight road, so oncoming traffic is concealed, a hidden junction on a fast road, poor or concealed warning signs at cross-roads.

In any given 500-metre stretch if there are more than 10 accidents in three years that have resulted in loss of lives, such places are called black spots. In Mysuru city limits, there are 12 black spots

READ ALSO  Farmers to block all National Highways on Nov. 26

The Police have taken a proactive role in rectifying the black spots by bush cutting to clear the tree branches or shrubs that obstruct smooth movement of vehicles and to increase visibility.

“This apart, we have taken measures to install warning signages on the stretches indicating the imminent danger to the motorists. A couple of such signages have already been installed at the black spots. We have also taken measures asking other public utilities to install street lights if at all the stretches are dark. Still people speed on the stretch ignoring the warning signs that cause accidents,” a Police officer said.